During the viewer favorite segment of "Mad Money," callers in the Lightning Round can ask host Jim Cramer about stocks they are interested in. One caller on Monday's show asked about Wingstop (WING) "Wingstop is a winner. I've liked it for a long time," Cramer replied. The Super Bowl parties are over, so let's see if the charts of the seller of chicken wings can maintain their momentum.

In this daily bar chart of WING, below, we can see that prices rallied strongly last year into an August peak. A correction unfolded into late November and then prices quickly reversed to the upside. WING is now back above the rising 50-day moving average line as well as the rising 200-day moving average line. The 50-day line is moving up fast and could soon cross above the 200-day line for a bullish golden cross signal.
The daily On-Balance-Volume (OBV) line shows a rise the past 12 months to an early January high. The line did not decline much when prices corrected and that is positive, but it has weakened a little since early January. The Moving Average Convergence Divergence (MACD) oscillator gave a buy signal in December but has waffled a bit in recent weeks.

In this weekly bar chart of WING, below, we can see an impressive advance over the past three years. Prices have more than tripled and are now back above the rising 40-week moving average line. The weekly OBV line has been in a slow decline from July and is not the kind of movement we like. The MACD oscillator just crossed above the zero line for an outright buy signal on this longer time frame.

In this Point and Figure chart of WING, below, and the software is projecting a potential upside price target in the $118 area. 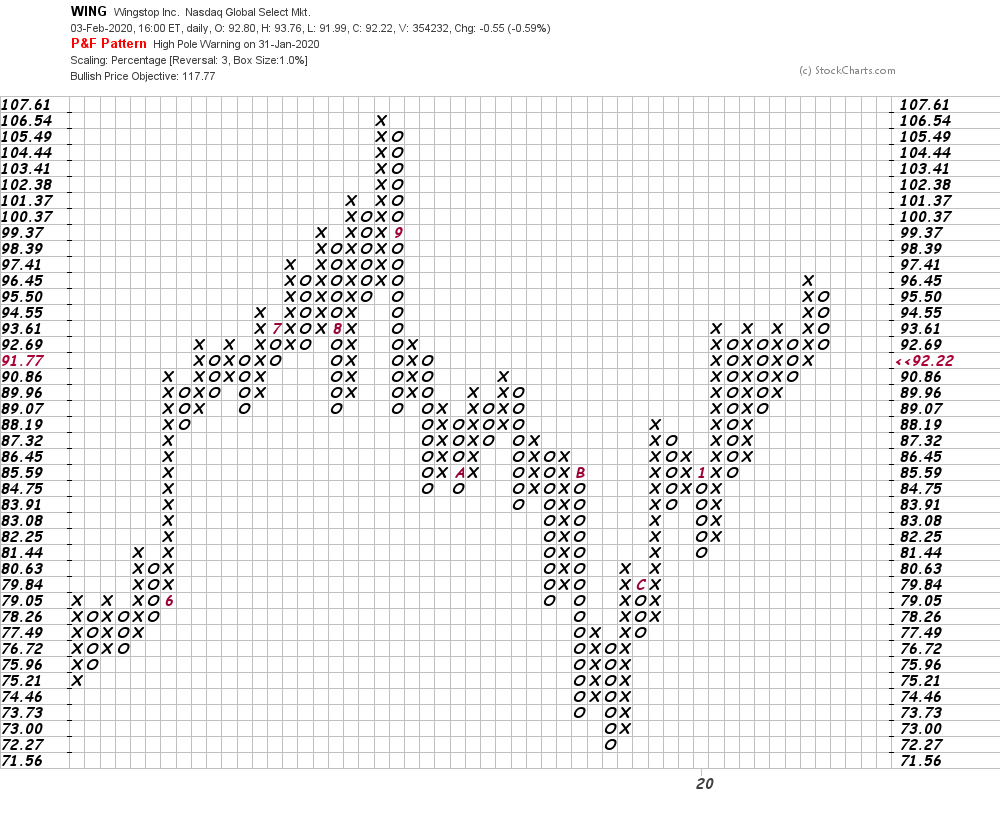 Bottom line strategy: WING could trade sideways in the $95-$90 area for a few days or so and aggressive traders could probe the long side in this area risking a close below $85. Add on strength above $97.41 with a target in the $120 area.
Get an email alert each time I write an article for Real Money. Click the "+Follow" next to my byline to this article.
TAGS: Investing | Stocks | Technical Analysis | Consumer | Food & Drink | Restaurants | Mad Money | Real Money