For his first "Executive Decision" segment of the evening on Wednesday's Mad Money, Jim Cramer spoke with Charlie Morrison, chairman and CEO of Wingstop Inc. (WING) , the restaurant chain that delivered a three-cents-a-share earnings beat that sent the stock up 1.5% by the close.

Morrison said Wingstop still sees its best years ahead. The company is in their 16th year of positive same-store sales growth and is still on pace to deliver 10% unit growth for 2019. They continue to expand their digital ordering, which now stands at 36%, and they are expanding their partnership with DoorDash for delivery services.

Let's check out the charts to see if they can deliver.

In the daily bar chart of WING, below, we can see that prices made a peak in late August and declined to Wednesday where we can see a large outside day and higher close. WING tested the rising 200-day moving average line last week and again on Wednesday. At the opening prices were well below the line but finished higher and trading volume surged. The slope of the 50-day moving average line is negative but a close back above $92 will break it.

The daily On-Balance-Volume (OBV) line has been steady the past three months when the price of WING declined so we can infer that longs largely held their positions as selling did not become aggressive.

The Moving Average Convergence Divergence (MACD) oscillator is below the zero line in bearish territory but the two moving averages are close together so a move higher in price could swing the MACD oscillator back above the zero line soon.

In the weekly bar chart of WING, below, we can see can see that prices have been in an uptrend for the past three years. The rising 40-week moving average line has done a super job in defining the trend and dips to the line have been buying opportunities. Hopefully WING will finish this week above the 40-week line.

The weekly OBV line has declined since July suggesting some liquidation and selling. A turn back to the upside for this indicator would be positive.

In this Point and Figure chart of WING, below, shows us a couple of things. The software still projects a downside price target around $77 but a trade back above $87.32 should improve the picture. 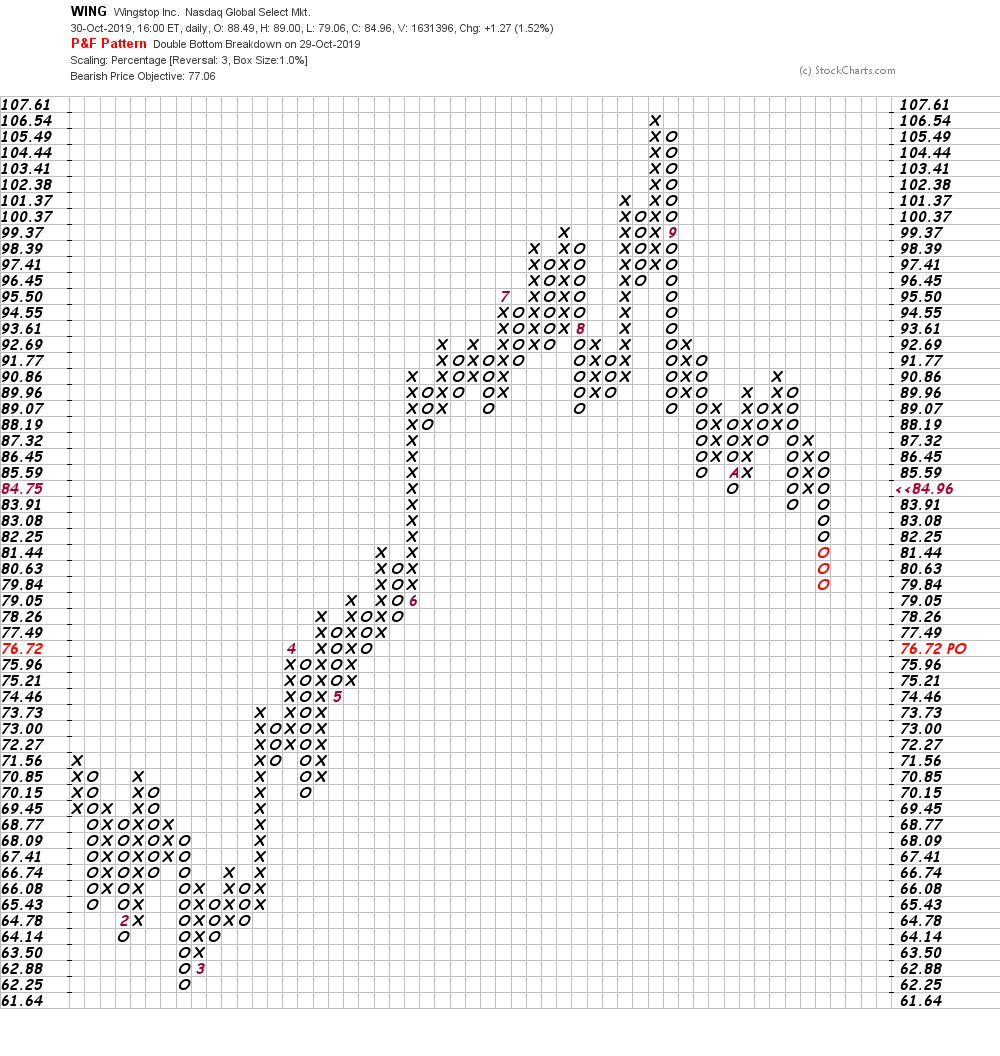 Bottom-line strategy: The rising 40-week moving average line has done a great job in the past three years. I would like to see WING close higher Thursday and Friday before suggesting a new long position.

Get an email alert each time I write an article for Real Money. Click the "+Follow" next to my byline to this article.
TAGS: Earnings | Fundamental Analysis | Investing | Stocks | Technical Analysis | Restaurants | Mad Money | Executive Interview