First, New York City votes to extend the limit on the number of permitted Lyft and Uber (UBER)  drivers operating within the city for an additional year. That, it seems, is not a negative, but certainly not a positive.

On top of that, the Lyft filed with the Securities and Exchange Commission to terminate the firm's lock-up period more than a month early, due to coming blackout periods as well as agreements with underwriters from the initial public offering.

This frees up a potential 257.6 million shares possibly for insider sales as soon as Aug. 19 -- instead of on Sept. 24. Again, possibly a negative. Every newly public firm goes through lock-up expiration. Nobody relishes it. Certainly nobody rushes to the date. Again, a likely negative ... unless ... the firm is feeling quite confident.

Note to readers: This firm is indeed feeling quite confident.

LYFT reported second-quarter adjusted loss per share of 68 cents. That was a serious beat. The firm generated revenue of $867.3 million, up 71.8% year-over-year -- also a serious beat. Active total riders printed at 21.81 million accounts, while revenue per rider hit the tape at $39.77. Both of these measures beat projected numbers, the revenue per user number by a wide margin.
Sales and Marketing expenses grew less than expected at plus 3% to $181 million, at least partially due to a reduced reliance upon discounting. In fact, LYFT was successfully able to raise prices in June for certain routes in certain cities.

The firm raises current quarter guidance for revenue to $900 million to $915 million vs. consensus of $842 million, while simultaneously improving the adjusted loss for the quarter to $210 million to $190 million, before interest, taxes, depreciation, and amortization. That expectation is considerably better than industry consensus of a loss of $337 million.
For the full year, the firm looks for revenue between $3.47 billion and $3.5 billion; consensus had been $3.32 billion.
It also looks for an adjusted loss of $875 million to $850 million, before interest, taxes, depreciation, and amortization. That's considerably better than both industry consensus of a $1.16 billion loss.
This next part is very interesting. The firm's U.S. market-share basically held steady at 28%, suggesting that the entire market for this kind of transportation service is growing as consumers become more comfortable with the idea. Uber -- the industry leader -- had been at 70% U.S. market-share. That firm reports Thursday, which is why I grabbed a few shares of UBER in after-hours trading after realizing that I had missed the move in LYFT.
On this performance LYFT CEO Logan Green said, "We remain focused on reshaping transportation and we are pleased with the continued improvement in market conditions." On cost control, LYFT CFO Brian Roberts said simply, "We became more efficient and the market became more rational." 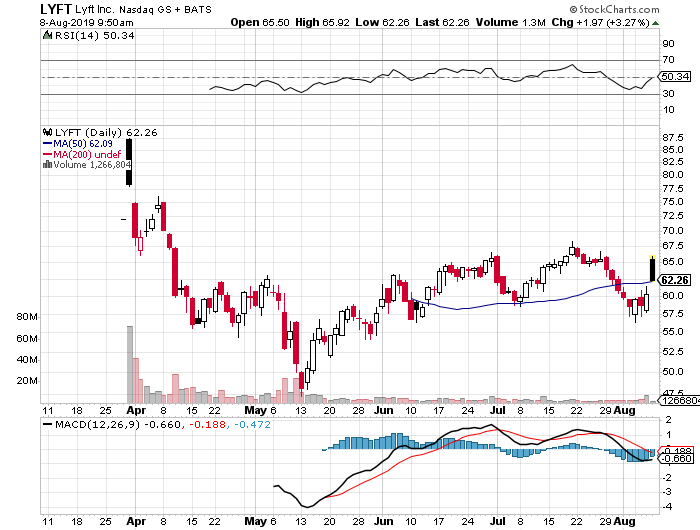 Technically, it becomes important that the name holds onto that 50-day simple moving average of $62.09 Thursday. Ordinarily, that could provoke greater fund participation, currently at 23% of ownership. The caveat here is that Aug. 19 lock-up expiration. Portfolio managers might trade this pop rather than invest until it is better understood how much demand there is among insiders to make an exit at the earliest possible date and how many are in it for the longer haul. For me, that means trading the UBER numbers tonight, but for now, even that one is just a short-term idea. We'll know much more about the addressable market by this evening.
Get an email alert each time I write an article for Real Money. Click the "+Follow" next to my byline to this article.
TAGS: Investing | Stocks | Transportation | Stock of the Day