Note: Meisler will be away for two weeks and have limited email access. Her next column will be Monday, Jan. 30.

Since I will be away for the next two weeks, I thought I'd once again go through the short-term overbought condition and then what to look for while I'm gone for signs that this could develop into something more than an overbought correction.

My Overbought/Oversold Oscillator is overbought. I have said it would get there sometime between Friday and Wednesday (Monday is a holiday, remember). The first thing you can see is how high it is, like it is stretching off the page. Notice that is similar to the way it was stretching off the bottom of the page in late September. Notice that in late September we rallied and came back down -- that is what such an extreme reading should do -- in this case pullback and try again.

My Oscillator is based on the 10-day moving average of net breadth on the New York Stock Exchange. When we are dropping a string of negative numbers, we are oversold. Conversely, when we are dropping a string of positive numbers, we are overbought. Breadth has been so good (bullish) that eight of the last 10 trading days have had positive breadth. On the table below, you can see the math behind the indicator. To get more overbought on Friday, net breadth would have to be greater than positive 2,104. We have not had one day greater than positive 1,700 this week, so I suspect we see this Oscillator come down on Friday. 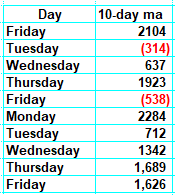 Then there is the McClellan Summation Index, which continues to rise (bullish). It now requires a net differential of negative 5,300 advancers minus decliners on the NYSE to halt the rise. That means we'd have to have back-to-back days with net breadth approximately negative 3,000 to get it to roll over. That's what makes the cushion good, but it's also what makes it overbought.

The number of stocks making new highs on the NYSE eked out a minor higher high to 108. It's better than earlier this week, but not as impressive as I imagined it would be when we first discussed new highs on Monday. 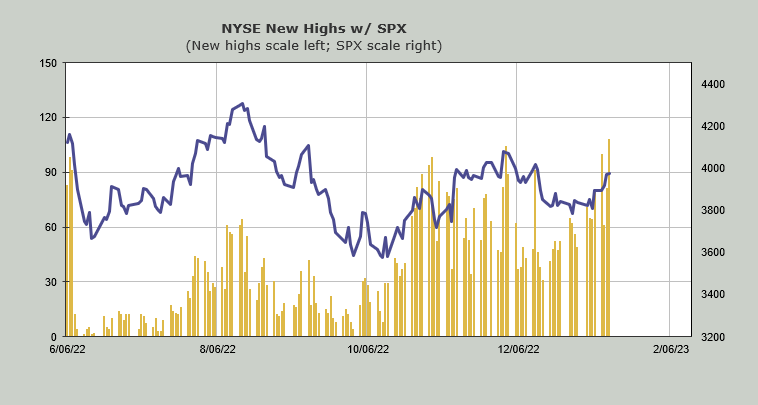 On the sentiment front, things feel a little bit frothy, but not over the top. The Daily Sentiment Indicator (DSI) for the VIX did fall to 12, though. The last time it was this low was the first week of November 2021. Before you think, oh no, understand that the DSI for Nasdaq and the S&P were over 90, then (now they are much more neutral at 34 and 32 respectively) and breadth was failing and new highs were contracting. That is not the case now.

But if I combine the low Daily Sentiment Index for the Volatility Index with the extreme overbought reading, I do believe we should get a bout of volatility next week. A pullback.

While I am gone, you can watch the new highs. If they start to trend under 100 for the NYSE and/or breadth begins to falter, that would signal more than a pullback. The other indicator I am watching is the ratio of the Russell 2000 fund (IWM) to the S&P fund (SPY) .

Recall that in November the small caps were terrible relative to the large caps (when the line is going down small caps are underperforming). 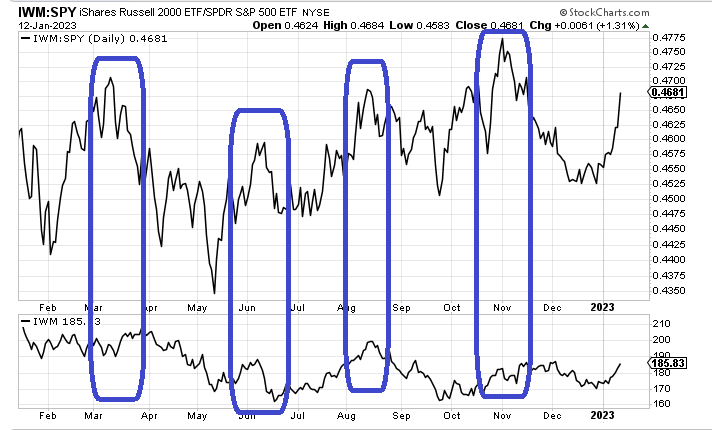 Since the calendar turned to 2023, it's been small-cap heaven, as you can see on the chart. Should this ratio peak while I'm gone, that would portend more than a pullback in the market. Each time this ratio peaks, the IWM is not far behind. Sometimes it is at the same time and sometimes it's about a week or so lag.

So that's what I'd watch for the remainder of January.