Will the chop ever end? Sometimes I just stare at the chart of the S&P and try and figure out what the current pattern looks most similar to. For example does that current chop look more like "A" or "B" on the chart below?

Then I look at what preceded both of those lethargic periods and I'm not sure any of them look similar to now. Perhaps that May whack does, so perhaps this is like B on the chart.

But, mostly, I look at the breadth indicators, which have refused to perk up, despite the small caps playing along. And bonds have fallen in price quite a bit these last few days yet the only "reopening" stocks that have really moved have been banks. That's a difference. 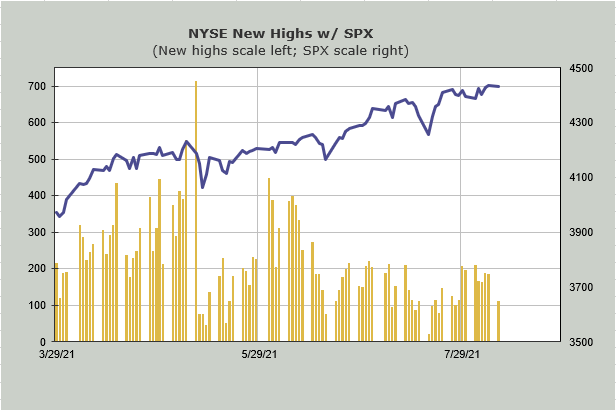 But let's talk about the transports. They are really down and out and no one seems terribly concerned. I get it, the rise in the delta variant has the airlines under pressure, but why are FedEx (FDX) and UPS (UPS) so down and out?

My view of the transports is that they, too, are in chop mode, only instead of being at the highs, they are doing it near the lows. There has been no movement up or down of any meaning in weeks. I think they are trying to make a stand, but what if I am wrong, and instead they crack under that 14,200 area? Shouldn't that concern us? It would certainly concern Dow Theory watchers as the transports are not confirming the industrials.

What I would love is for the market to shake things up in general. Give us a whack that let's us see which stocks want to hold and which ones want to break. A whack would get the already somewhat elevated put/call ratios to move even higher, sending them to "too much fear" territory.

A whack would get the Volatility Index to jump. Currently the Daily Sentiment Index (DSI) for the VIX is at 11. Couple that with the DSI for Nasdaq back at 89 and we know something should happen to shake that up. I suppose we can continue on in this seemingly forever grind, but generally speaking when the DSI for the VIX is so low and the DSI for one of the big-cap indexes is so high, the result is a shake up in the market.

I would have liked to hear more chatter about gold than we did, but as I'm sure you've seen, gold got whacked in the last several days.