Just talk. There has been so much discussion in the print media of late covering market direction. The obvious hand wringing. The gnashing of teeth. The whole wall of worry. I too, sit and think about market direction. Actually, I think about it all the time. I find the most progress is made in deciding what track I should take in the middle of the night, or very early morning. There are a number of factors that remove all distraction as those hours pass. No ballgames to watch on the tube. No other human beings up and about. The trick is, and there really are no tricks, that we must simply play the game in front of us. Preparation.

Environments. Understand. Fear? No fear. While this ugly emotion can be a great motivator, what do fearful thoughts really produce? In most cases, the motivation would be a "fight or flight" response. Both are instinctual. Both may result in a positive result. Just as likely, if not more so, that such a result turns to the catastrophic.

I have tried to drive home for my readership my method for reasoned thinking -- usually when financial markets are faced with terrific adversity -- but I find the method useful in all environments. And in fact, as a means of navigating the many life changes that one experiences that force the involuntary evolution of the individual.

Most simplified... it is in the realm of the pragmatic where we all must exist, where we all must make our adjustments. Far more than primitive are we in our abilities, yet still so very far from idealistic perfection. What makes us all so individually beautiful is, when broken down, our imperfection. That said, rejoice when you know you are weak, for then you already know where to strengthen yourself. This is where the journey becomes both difficult and worthwhile. As a reminder, my five steps toward overcoming obstacles are:

5) Maintain. No victory. No defeat. New target, or move on. Back to step one.

Have your own method? Very cool. No method at all? Recipe for failure. Fear? Fear is but for the wicked. We shall not fear.

The are many who right now refer to this market as overvalued. Many metrics. Some quite complex. I am far from sure that I would go there at this time. Of course, I may be wrong. I may be right. Hence, today's opening message.

Broader equity indices here in the U.S. are again closing in on all-time highs. I have been warning for quite some time now that nearly all of my models had started pointing toward a higher valuation. I think it key to understand that increased valuation is the result of the environment provided and not necessarily accurately illustrated by the term "overvalued."

There is so much to understand. In fact, so much so, that to put valuations in simple historical context becomes nothing more than first-level thought. I don't know this to be fact, and if arrogant in my process, I apologize. This is for now just a thought, but a growing thought.

Investors must understand, first and foremost, that economics and the application of business is art, not science. Never was science. Science is easy in comparison. Controlled conditions, identical tests. Predictable results.

Introduce human response, and wow, ain't nothing like it. Every individual, every race, creed, culture, gender, every generation... all think differently based upon accumulated experience and personal ability. Simply put, as an older fellow, I might see interest rates quite differently than someone half my age, already swimming in debt. Perception. Conditions such as the price of credit over time, can in real terms be high or low, but the only impact that matters is that broad or aggregate public perception. Human response.

So, is a forward looking P/E ratio of 16.8x really that expensive for the S&P 500, when the five-year average is something like 16.4x? Yes, earnings are projected as negative for the first quarter -- and even the second -- but in the early going, those earnings are beating.

The nation will get its first look at first-quarter GDP this Friday. All indications, at this point, are that the previously expected severe slowdown in the economy has been for now averted. That does not mean that the naysayers were wrong. This may just mean that those naysayers were not right yet. It does mean that the likes of you and I might still find some opportunity here and there, and we probably better make it count when we do.

What is truth? Fact is that according to EPFR Global, funds that invest in U.S. equities enjoyed consecutive weekly inflows, for the first time since September. This, as many feel the U.S. draws closer to a trade deal with China, the Federal Reserve seems to be at rest for now, and the Mueller report in theory should greatly reduce the level of political uncertainly here at home.

At the same, time, equity fund flows in China had their most positive week in four months. That's human response. Now, bond funds have seen more inflows all year. As the U.S. and China (forget about Europe, for now, you have to) both post far better-than-expected results for first-quarter economic growth through these rainy days of April, does that provoke the selling at the long end of the yield curve that provides a wider spread for the 3mo/10yr and 2yr/10yr measures?

With the FOMC still gun shy from their brush with disaster in late 2018, does that provide the space required for both core inflation, and wages to expand in more robust fashion? If this indeed happens in this way, cash will chase performance. And 16.8x will seem like child's play.

WTI Crude, as well as the global benchmark, Brent, are roaring in overnight trade. This development comes to pass due reports that the U.S. State Department has warned the eight nations granted 180-day waivers that allowed those countries to continue to purchase Iranian oil that the expiration date on those waivers looms close. May 2.

It now becomes extremely uncertain as to whether extensions will be renewed. Expect nothing. Be prepared for everything. Keep in mind that although the next formal meeting of the "OPEC plus" group cooperating on production levels is not until June, leaders from Russia, Saudi Arabia and other producing nations will meet next month in Jeddah.

We all know that the banks have underperformed, maybe not quite so much in profitability, but certainly so in terms of valuation. A name that is perhaps among the most severely undervalued is Citigroup (C) . Part of that is perception based on what little room a flat yield curve leaves for net interest margin. Part of this is Citi's high level of international exposure, as Europe drives off of a cliff. Still, the name remains very well capitalized, while consistently displaying a commitment to shareholders. But the stock barely trades above tangible book value. 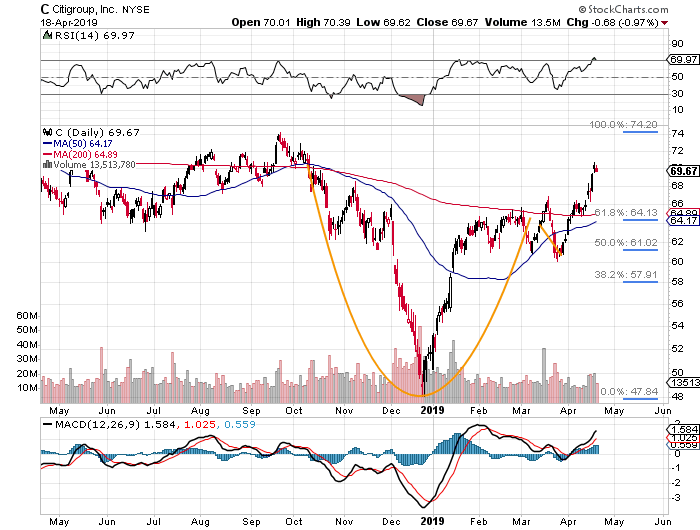 One thing is obvious. The shares, since earnings have catapulted out of that cup and handle, have become more attractive as they have gained momentum upon smashing past the pivot / resistance at the $66 level. Why do I tell you this? Because I think before the stock can move on, it will likely test that level above, and being flat this name, I would like to grab some ahead of the GDP print later this week.

My target for this name, once acquired, will likely be somewhere in the low $80s, perhaps $81. I think my best execution probably comes around $66/$67. That means, if I do grab some here, it will be less than 1/8 of my intended position. In the meantime, Citigroup $67.50 June puts went out at $1.60. That either puts $160 in my pocket or gets me a net basis better than my desired entry price.

Get an email alert each time I write an article for Real Money. Click the "+Follow" next to my byline to this article.
TAGS: Earnings | Economy | Investing | Markets | Politics | Stocks | Technical Analysis | Trading | World | U.S. Equity | Global Equity