By TIMOTHY COLLINS Jul 22, 2019 | 02:30 PM EDT
Stocks quotes in this article: DIS, NFLX
Disney ( DIS) owns the box office this year. Nine of the Top 10 films have come from the studio. Given the huge library of live-action remakes and superhero films at Disney's disposal, that dominance will not end until the market finally throws up its hands and asks for something more "original."
I, for one, can't wait for the live-action remake of "Wall-E." I imagine it will be like "Terminator" meets a fat-suit convention. And finally, we'll have a use for all those underappreciated landfills across the U.S. And let's not forget about yet another "Star Wars" trilogy and 58 sequels to "Avatar," the most unquotable movie ever.
But in all seriousness, the market continues to reward Disney for this strategy, so why should the company change? And every one of these huge hits will head to its streaming service, likely with exclusivity, unless some company cuts them a sizable check.
The company reports earnings Aug. 6, which will give us the first chance to gain insight on the impact of "Star Wars: Galaxy's Edge" on theme park attendance. This new portion of the park won't be open in Florida until the end of August, but I imagine the early numbers from California will be discussed in guidance. That should give us some look through for Florida's expectations. I'm actually excited about theme parks moving forward. Between Star Wars and Avatar, Disney will have more reasons for kids to beg their parents to take them to the Happiest Place on Earth.
It's hard to imagine a scenario where Disney doesn't see a bit of profit-taking either into earnings or immediately after. We have a lot of catalysts already known, and with the company hitting on all cylinders, expectations are high. Netflix  ( NFLX) continues to sell off, so I would imagine money moving from Netflix to Disney and other streaming-related companies has already found a home. Also, the technical picture shows the potential for some measured, but minimal, downside.
On the daily chart, we have an "M" pattern unfolding, appropriate for a company known for its mouse. The $138 level sets us as key support. Should that fail, then I would target the low $130s for a long re-entry into Disney shares.
Bulls need to get prices above $142.75 to reverse course. Above $145.50 and I would expect a quick pop to $150. The problem is trend and momentum are waning. The bearish crossover in the Full Stochastics hasn't been fantastic for bulls. While downside has been somewhat muted after this trigger, there's been absolutely no upside.
The weekly picture offers more optimism for bulls. After the huge move higher in April, Disney's prior earnings report, we've seen great consolidation. I still don't understand how anyone wanted to short that pop without seeing more information first.
The weekly chart simplifies the view of the daily chart with a $145 resistance and $138 support. Anything between those numbers is simply chop. We've seen more indications in this time-frame of consolidation. Momentum, volume, and trend have all cooled. None offer much in the way of guidance, so price is the leading factor. I see no reason to sell under support holds.
In fact, I'd hold through earnings and buy protection below $138. I believe any move above $145 will result in a chase, which makes profiting from a post-earnings position difficult. Tying an Aug. 16, $140 put around $3 to the stock would be my risk management approach. If I weren't an owner, then I'd be patient and wait for a break to establish anything new. For now, I'm on the sidelines, but lurking. 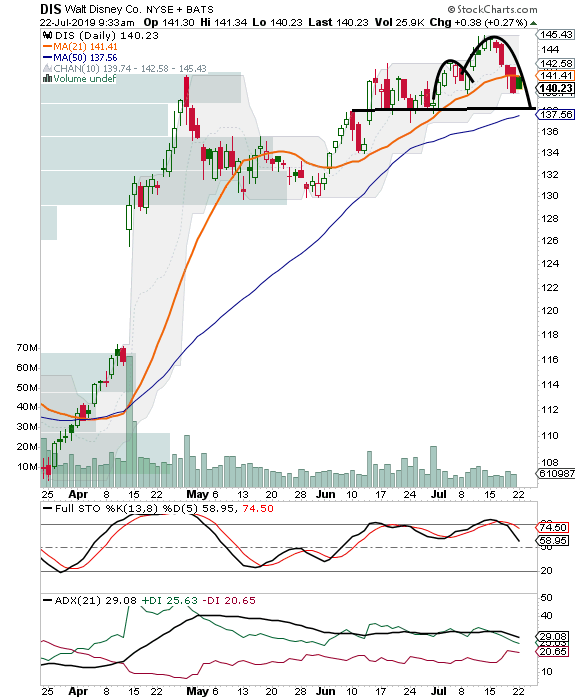 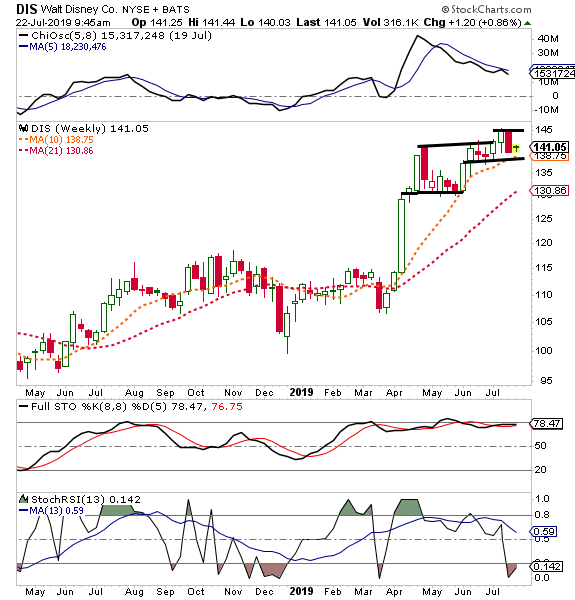 Disney is a holding in Jim Cramer's Action Alerts PLUS member club.

Get an email alert each time I write an article for Real Money. Click the "+Follow" next to my byline to this article.
TAGS: Entertainment | Investing | Stocks | Digital Entertainment | Telecommunications | Earnings Preview