The major equity indices moved higher again Tuesday, with bullish stochastic crossover signals registered on several. However, advisor bullish sentiment continues to be excessive and valuation remains extended, while one key indicator (discussed below) is raising a cautionary flag.

All the equity indices closed higher Tuesday with positive internals on the NYSE and Nasdaq as trading volumes rose from the prior session.

No technical events of importance were generated on the charts although bullish stochastic crossovers were registered. However, in our view, they are not yet actionable as the charts need violations of resistance or trend that have yet to be achieved.

Near-term trends are unchanged with all neutral except for the Dow Jones Transports staying positive.

The near-term cumulative advance/decline lines for the All Exchange, NYSE and Nasdaq (see below) remain neutral as well.

We would note, however, the intermediate-term A/D for the Nasdaq is negative and cautionary, having made a series of lower highs and lower lows since the beginning of August. 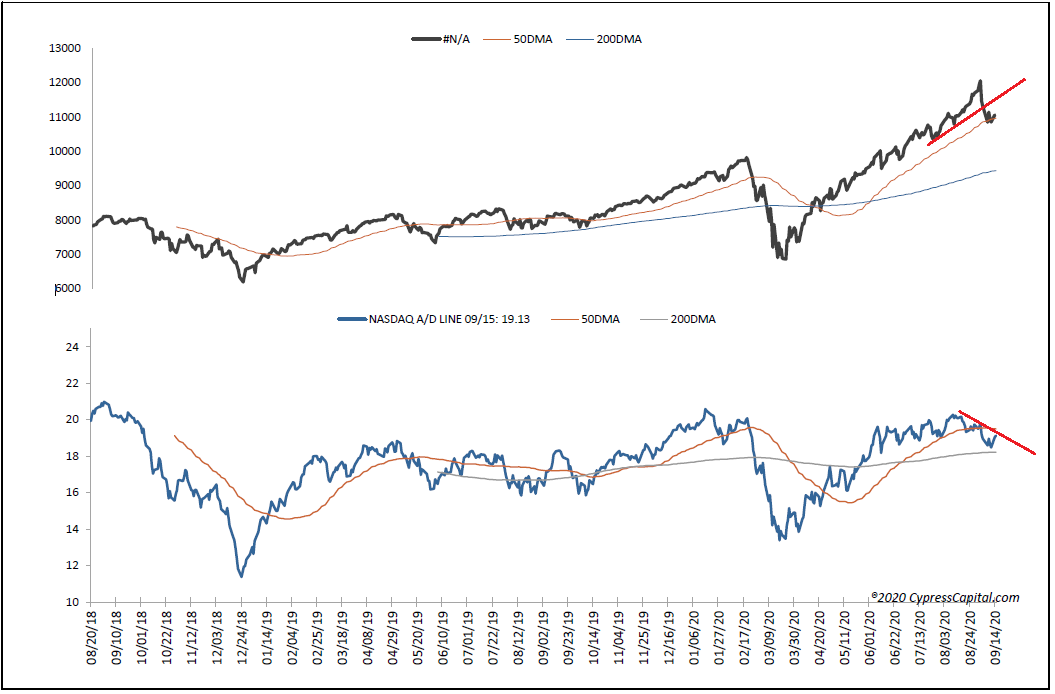 The Open Insider Buy/Sell Ratio is also neutral but dipped to 54.5 while the detrended Rydex Ratio (contrary indicator) remains neutral at 0.37 with the leveraged ETF traders slightly leveraged long.

This week's Investors Intelligence Bear/Bull Ratio (contrary indicator) was virtually unchanged at 16.2/60 after hitting a two-year high last week at 61.2. It remains a concern as such lopsided bullish sentiment on the part of investment advisors implies a potential shift in their outlooks that could be quite meaningful for the markets should such a move be generated.

The counterintuitive percentage of S&P 500 issues trading above their 50-day moving averages is neutral at 60.4%.

The valuation gap remains extended with the S&P 500 trading at a P/E multiple of 23.3x consensus forward 12-month earnings estimates from Bloomberg of $146.21 per share while the "rule of 20" finds fair value at a multiple of 19.3x.

Tuesday's action, while positive, was not enough to cause a shift in the weight of the evidence, in our opinion. Valuation remains extended with advisor sentiment all on the bullish side of the boat, suggesting complacency.

Also, while short-term breadth is neutral, a look at the intermediate-term picture on the Nasdaq suggests the foundation for market advances has been deteriorating since August. As such, we remain "negative" in our near-term outlook.