You'll hear the word "tentative" often this morning. First and foremost, remember this. We may have political leanings. That said, we are mercenary in our approach. Always. We try to understand what provokes reaction, so that we might identify obstacles. Once identified, then we know where there is a need to adapt. Knowing that, we overcome. Then, rinse and repeat. As investors, we do this over and over and over. We are chameleons when our surroundings change. The environment provided constantly evolves. We, too, are constant.. in our drive, in our resolve, in our effort to succeed.

News broke on Monday night that what might be termed a "tentative" deal had been reached by the senior leaders at the House and Senate Appropriations Committee. What that means simply is that a framework is now in place for compromise. This does not yet necessarily mean that when those spending bills expire late this Friday night / Saturday morning that the federal government won't fall back into a state of partial shutdown. Equity index futures are reacting well. That is merely, in my opinion, the negative reaction in sentiment that a shutdown would have brought being priced back out of the marketplace. Materially, nothing has changed for the better or worse in our world. That somewhat disappoints me.

It was my hope that news like this might shave some valuation off of the U.S. dollar versus the greenback's competition. It's early. Most of you will not wake for a bit, but overnight, we've really only seen some slightly negative movement for Sterling, likely having little to do with U.S. internal politicking. The yen moved below its 50-day moving average versus the dollar on Monday, and remains as weak as it has been since Santa showed up.

There will be talk this morning about something in the range of $1.3 billion or $1.4 billion to be earmarked for barrier building at the southern border. There will also be talk about limiting the number of beds available for those detained, which only goes to show that some folks fight just to fight. Mostly this morning, I think we'll hear criticism of this compromise that will place doubt on the government's ability to remain open. If that is how this day develops, short-term traders will get an opportunity to take advantage of this pop, as the trade condition with China will continue to be the tail that wags this dog.

Something that I saw last week really bothered me. It didn't seem to make much of a lasting impact on the financial media, but to me this is sacred ground where perhaps we should not tread. San Francisco Fed President Mary Daly let on late last week that perhaps the Fed might use balance sheet management more as a two-way tool, and less an an experimental stab at staving off widespread financial crisis.

Many will see this differently than I do, and I will respectfully disagree with their conclusions. Central bankers now, by what this implies, see themselves as having saved the economy from "depression" through quantitative easing, which post-crisis was the suppression of interest rates through balance sheet expansion.

In plain English, the Fed bought a lot of Treasury and mortgage-backed securities in order to force investors to seek yield in riskier assets. Now, just as clearly, central bankers also see themselves as having saved this economy from over-heating in response to much-looser fiscal policy through the use of quantitative tightening. That, in pain English, has amounted to the drawdown of the same balance sheet through allowing securities to roll off the books at maturity, with re-investment.

The danger, or one of the dangers, I believe, in normalizing the use of the balance sheet as a tool alongside the setting of short-term benchmark interest rates will be the continued harm to savers, and now forever an inability for not only investors, but businesses and regular citizens, to effectively assess risk. Oh, there will likely be an increase at some point in the government's over-reliance on debt /credit as the miracle cure for every malady. What could possibly go wrong?

Would a shift in the way the central bank manages its balance sheet allow for less manipulation of short-term interest rates? Yes. Would this further compress the yield curve? At some point, certainly.

What then, will the government tax savings through forced negative rates? The San Francisco Fed opined on negative rates in a research paper, as well. What then? Decades of malaise? We all know that as one inch is surrendered to the forces of artificial market manipulation, another is eventually asked for. Then another. Short-term pain must always be averted. Who will suffer greater than us? Our descendants, and by our own hand. Nice job. That is the way it is.

Does the Fed eventually buy ETFs, or equities in order to support markets? That's been done elsewhere. Does the Fed target everything, not just predict, but target GDP?

Maybe I'm too old. Maybe I'm flat-out wrong. As mentioned above, I will adapt to the environment provided. As always, I will try to excel in that environment. You know what is in my heart. Long live the free market economy. Long live the point of sale. Store clean water. Store canned food. Buy gold. Never. Never forget who we are.

You might call this stock a beast. You might be right. Take a look at the chart below. One heck of a year. That does not quite do the chart justice. Let's try that again. ONE HECK OF A YEAR. That's better.

I am flat the name going into earnings on Tuesday evening. Too bad really, as this would be the crown jewel in any portfolio. Then again, if I did have these shares on my book, and I have been in this situation, I have always been uncomfortable sitting on over-sized profits going into the numbers.

Given my well-known affection for the cloud, how is this not in my portfolio? I have rented the name, but not for a good while. Swing and a miss. What can be done now, other than sitting on my hands and pretending I'm satisfied? 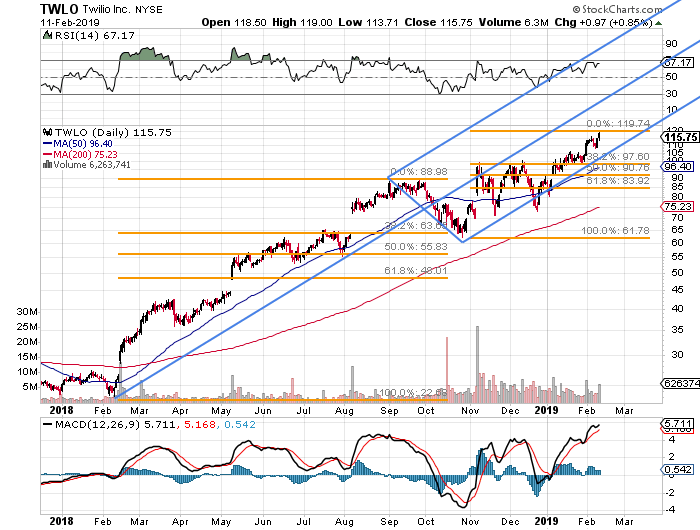 What sticks out is that algorithmic traders have rewarded buyers at standard Fibonacci levels of retracement, while what have likely been passive investors have been on the bid side for most of the past twelve months. Looking at the action, a selloff could provide an entry level below $98. That's strictly a fantasy right now, but it is something to work with.

Relative Strength has remained close to overbought levels more often than not over that time, while the daily Moving Average Convergence Divergence presents as nearly alarming in how strong the 12- and 26-day EMAs appear.

I would like to buy this equity, but not up here. That could be an unwise stance to take, as I have had this very thought at lower levels in the past.

However, thinking as a trader sitting on this profit, I know that I shave something before I see the digits. What is in my head this morning, gang, is to try to benefit from a short-term negative reaction to earnings.

Never mind that those earnings might be great. Traders are sitting on money here. We don't want to short the name -- this must be done in such a way that we control the risk. And in a day or two, if the price is right, we grab a few shares. There's no dividend, so no net if you fall.

Note Number Two: Should there be a selloff, the same trader could purchase 100 shares of the equity and sell a covered call expiring in six months. The idea there would be to reach ten dollars in terms of strike price, while capturing as much as $15 in premium. Know what I mean?

Get an email alert each time I write an article for Real Money. Click the "+Follow" next to my byline to this article.
TAGS: Earnings | Economic Data | Economy | Federal Reserve | Interest Rates | Investing | Politics | Stocks