I'm not going to try and spin it, the Atai Life Sciences (ATAI) chart is broken.

The chart doesn't just look broken. It is broken. Once ATAI shares lost the $17 level around July 26, the wheels came off, the level got rejected hard on the first bounce, and folks have been throwing in the towel ever since. 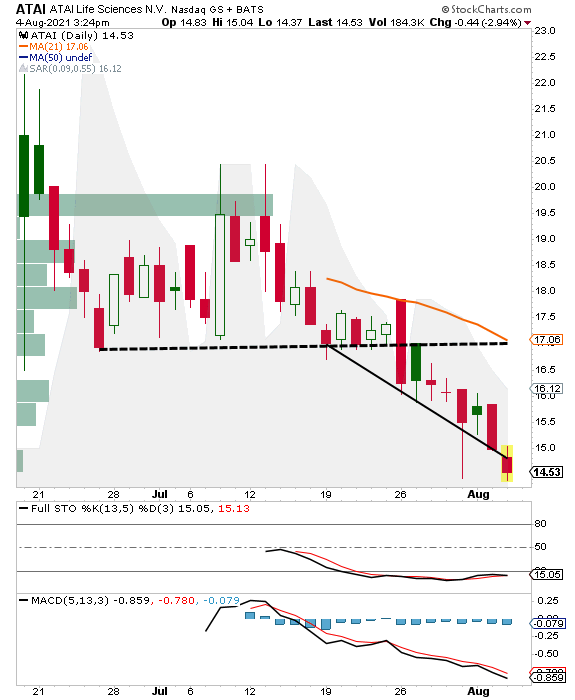 Will the Moving Average Convergence Divergence (MACD) ever find a bottom? Again, another terrible sign. One might try to argue a bullish divergence in the Full Stochastics, but that appears ready to cross bearish again.

In short, everything about ATAI is awful right now, but I happen to love the space long-term and believe that sellers here may regret their decision to sell when we look back in a year or two; heck, maybe even six months.

Atai recently came public by selling 15 million shares at $15 each, raising $225 million. The company is a clinical-stage biopharmaceutical company focused on using psychedelic compounds and digital therapies to treat mental health issues, a major unmet need around the globe.

The company uses a platform approach taking interest in numerous companies and subsidiaries that are pursuing treatments in a highly diverse set of indications. Maybe their best-known holding is Compass Pathways (CMPS) , a $1.4 billion public company in the psychedelic space. Atai owns nearly 20% of Compass, which is developing a psilocybin therapy for treatment resistant depression (TRD).

Unfortunately, looking at the Compass chart, below won't help make folks feel any better. A break below $32 and this chart will probably resemble ATAI breaking below $17. Again, momentum and trend look terrible and until the stock is back above $36, bulls are in complete charge. 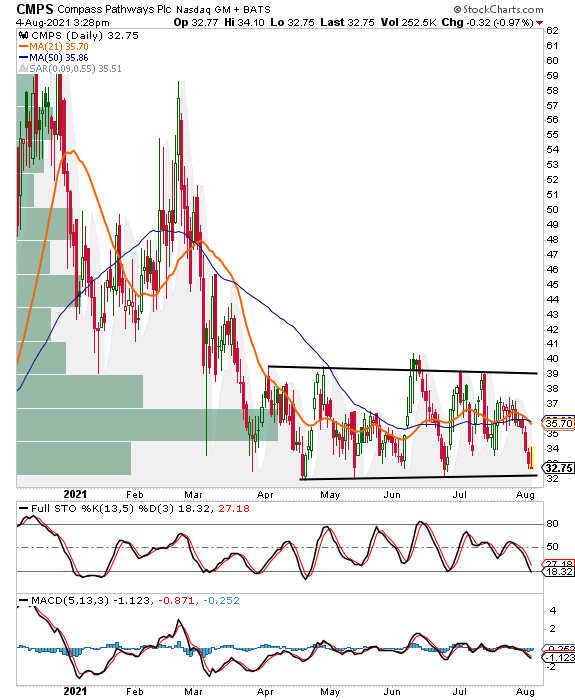 These unmet needs total multi-billions of dollars of opportunity each year and the treatment game won't be a zero-sum game. In other words, there can be multiple winners in the same space, treating the same things. That's one of the most appealing aspects of Atai's approach. It doesn't need every portfolio holding to be successful in order to succeed and one portfolio company succeeding doesn't preclude another from succeeding.

I have no idea where this one ultimately bottoms but I'm willing to begin building a position below $15 and continue to add all the way down to $8, if we happen to get that far. This is a long-term view and I intend this to be a longer-term hold as I believe strongly in the psychedelics space.

Get an email alert each time I write an article for Real Money. Click the "+Follow" next to my byline to this article.
TAGS: Investing | Markets | Small Cap | Stocks | Technical Analysis | Trading | Biotechnology | U.S. Equity