By STEPHEN GUILFOYLE Jul 15, 2019 | 12:57 PM EDT
Stocks quotes in this article: TGT, WMT, KSS, EBAY, M, MSTF, FDX, UPS, AMZN
The shares seem to be relentless. What, if anything, can stop this momentum? The firm that seems to do it all, and, to some degree, do it all well, launched the fourth annual Prime Day this morning at 3.
Actually, the Amazon ( AMZN) event will last through Tuesday, meaning that perhaps its title should be pluralized. My wife has already put together Christmas lists, which is incredible in mid-July for us.
I remind my wife that Target ( TGT) , Walmart ( WMT) , Kohl's ( KSS) , and eBay ( EBAY) , and Macy's ( M) , among others, try to compete for you dollar this week. In fact, RetailMeNot predicted last month that as many as 250 retailers would put up their dukes. Though Christmas shopping might be considered a little aggressive in July, back-to-school shopping certainly is not. What to expect? Amazon does not release sales totals in dollar amounts for this event. They did, however, sell 100 million products over the 2018 Prime Day. Estimates are out there that Amazon can expect to generate more than $6 billion in sales over these two days, which would be a significant increase over last year's estimates.

Why I Just Can't Walk Away

For a day trader, the stock is like candy. There comes enough wiggle in the name at some point that often a chance comes to turn a profit short-term, regardless of whether the position starts out as bearish of bullish. In the name of risk management, I like to go about trading in that way through long positions in weekly option, it can be either calls of put depending on one's gut, and the trade the intra-day technicals. It kind of softens the blow of having exited a long-term winner quite poorly. The question is, beyond trading, is Amazon still worthy of investment?
You know that I still like the name. It's sort of hard not to, even if growth has to slow, if only due to maturing markets across some of the firm's traditional business lines. Amazon's growth driver in 2019 is not really the e-commerce business, but the advertising associated with it, as well as Amazon Web Services. The firm's dominant position in the public cloud is at this point undeniable, with only Microsoft's ( MSTF) Azure even in the game at that level. In fact, currently at stake between the two rivals is the Department of Defense's Joint Enterprise Defense Infrastructure, or JEDI, or still quite simply the Defense Cloud. The winner takes a contract estimated at potentially $10 billion. Nice work if you can get it.
My thought is that higher growth across higher margin businesses is never a bad thing, while the firm continues to dominate its traditional business lines, leaving little in the way of competition in traditional mall-based retail. On that note, while Amazon has appeared to target existing delivery services firms such as FedEx ( FDX) , and United Parcel Service ( UPS) long term, this week's festivities do create potential trade-able events for those names as well.
The Chart 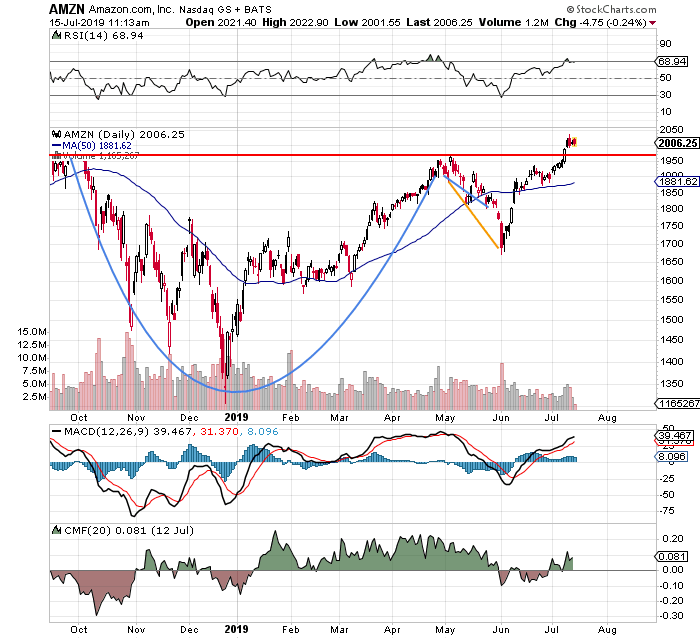 One can see how last week, AMZN kicked in the door, and drove a couple of percent beyond the pivot created by the cup-with-handle pattern that begins all the way back in late September.
Now, just above the level, Amazon finally catches its breath, which is healthy. These shares need to base. It based upon the massive depth of both the cup (-35%), and handle (-15%), that leads me to believe that, technically, this name eventually tacks on a few hundred more points. Not kidding. But I would not be surprised to see some big-time back and forth that might scare folks at times.
Do I want back into the equity? You bet your tail I do. Do I want to just pay these prices? No way, dude. I want to pay the 50-day simple moving average, currently $1,881. That's sort of like hoping that one hits the lottery, so I'm probably going to find another way. In case one was wondering, with earnings due next Thursday. $1,880 puts expiring next Friday are still paying about $8 today. If the shares never get there? It's 800 bucks in the back pocket. If they do? The trader would be wearing them at a net basis of $1,872. Only you know if you have the risk tolerance to risk a $187,200 (per contract) outlay.

Get an email alert each time I write an article for Real Money. Click the "+Follow" next to my byline to this article.
TAGS: Investing | Stocks | Retail | Technology | Telecommunications | Prime Day