Are we witnessing the total inverse of what we saw throughout much of the last two years? By that I mean the outperformance of big or mega-cap tech vs. small-cap stocks has been a theme for years in the market; in the last two months, however, we have seen that entire underperformance get wiped away. Yes, in just two months.

The ratio of the small caps using the Russell 2000 exchange-traded fund (IWM) to the large-caps, according to the SPDR S&P 500 ETF  (SPY) , had been in a big downtrend since the middle of 2018. It bottomed in March, but really it spent the ensuing six months back and forth. It wasn't until the election that the relationship had a major about-face.

But it's not just tech. And, Thursday, it certainly wasn't just tech. It was like all of the winners of the last few years were being sold in hit-the-bid fashion. There was Visa (V) and Home Depot (HD) in addition to some big-cap tech names.

Many will say growth stocks got walloped, but there were plenty of growth stocks that were up on Thursday. So, I'm not sure it's a growth vs. value thing. It's more like we saw a big portfolio switch. I say that because the volume in some stocks that rallied was quite large, almost as if someone decided to cover some shorts. I have said it for months: It remains an either/or market. Either big-cap stocks rally or small-cap stocks rally, but they can't seem to do it together.

The S&P was down -- and unless it rallies Friday -- will be down on the week. Yet breadth was solid once again. I do want to address the number of stocks making new highs on Nasdaq, since it has soared to well over 600.

While I have not yet read the list from Thursday, I have been reading the lists for the last few weeks, because the number of new highs seems inordinately high. It turns out the list is littered with special purpose acquisition companies, or SPACs. That would be fine on its own, well, maybe it would be fine, but here's the rub: Each SPAC gets approximately three listings.

There is the SPAC itself. Then there might be warrants. Then there might be units. Sometimes, there is even a Class A or B. So for each SPAC on the new high list, it nets you sometimes three or four new highs, when it should really be one. Nearly 30% of the new highs one day were SPAC- related. I am not a fan of rationalizing an indicator, but in this case it's certainly worth noting.

Away from all of that, for months, beginning in September, the put/call ratio for the Volatility Index had been high, with readings over 1.0 on a regular basis. But when we turned to 2021 that stopped. The readings haven't collapsed to low ones, but there has only been one reading over 1.0 since January began. 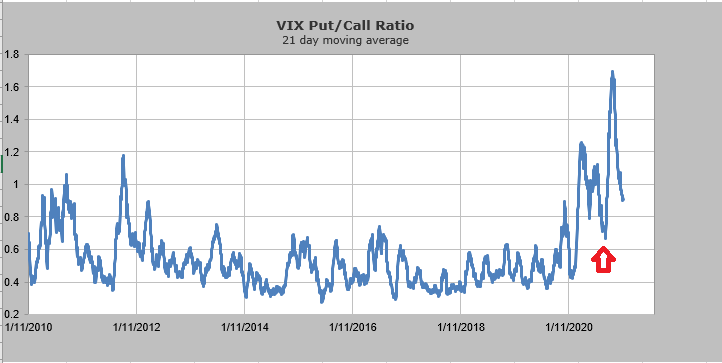 The 21-day moving average has come off the boil, but it is not exactly super low -- yet this change in tone from the VIX options players did catch my eye. High readings in this metric are bullish, because it is a bet on the VIX, not an index or stock. That prior low (red arrow) was the September high in stocks.