Regular readers of mine on Real Money know that I have been both an avid supporter and investor in AbbVie Inc. (ABBV) . The name was one of my calls for late 2019, and for 2020. And I have backed up those calls in print as well as on your television screen.

It would be a positive for me if AbbVie would perform.

There, now my personal bias is out in the open, let's talk in depth about AbbVie.

We'll start with last week. The shares sold off a bit on scuttlebutt around Wall Street that fourth-quarter earnings might disappoint when released on Feb. 7.

Analyst consensus is for earnings of $2.19 per share on revenue of $8.7 billion, but that said, nobody in AbbVie in January 2020 is in it for the past performance. You are either in this name because of the foresight shown by management, or for the dividend, or if your name is Steve Guilfoyle, for both.

The spread of the Wuhan coronavirus has accelerated across China, and at a minimum led to at least some fear around the planet. That much you know.

What you may not know at this point, is that the Beijing branch of China's National Health Commission has stated that at least part of the latest treatment for this coronavirus is a cocktail of two AbbVie drugs, Lopinavir and Ritonavir under the brand name Kaletra.

This treatment, known for its use in the fight against HIV, is now under clinical trials to determine its efficacy versus this virus. A Bloomberg article cites at least one patient, a respiratory expert at Peking University Hospital in Beijing, who says that the HIV treatment worked on him.

Perhaps even more importantly would be some news directly related to the core thesis for my investment in this name. To review, the real driver for AbbVie in recent years has been the "miracle" arthritis drug known as Humira. This is a drug capable of generating $18 billion to $19 billion in revenue per year.

Just one thing, though, the patent for Humira has already lost its protection in Europe, and such protection within the U.S. is set to expire in 2023. AbbVie had to act in order to effectively diversify.

I believe the proposed $63 billion acquisition of the Ireland-domiciled Allergan AGN was a master stroke in terms of replacing potential losses in revenue as well as free cash flow due to eventual generic competition for the Humira consumer. Keep in mind that this is a big dividend name for investors (5.6% yield), so sustaining that cash flow matters, big time.

Allergan, on its own, had been projected to reach sales of more than $15 billion both this year and next. Allergan's footprint in the pharmaceutical space runs through eye care, neuroscience, and women's care, but the company is probably best known for Botox, which is used not just for cosmetic purposes, but for the treatment of migraines.

AbbVie has more international exposure than does Allergan, making this an area of potential growth. That's before we even get into the $100 migraine pill that our own Jim Cramer has been talking about this morning.

The second bit of news around AbbVie that broke Monday is that AbbVie and Allergan have entered into a definitive agreements to divest Brazikumab (Crohn's disease and ulcerative colitis) to AstraZeneca (AZN) , as the latter will be re-acquiring those rights; and Zenpep (pancreatic digestion issues with fats, proteins and sugars) to Nestle (NSRGF) . Closing these deals is reliant upon approval by both the U.S. Federal Trade Commission and its European counterpart, and "represent significant progress toward the completion of our acquisition of Allergan," in the words of AbbVie chairman and CEO Richard Gonzalez.

Fears of lost market share related to Humira sales is likely the primary reason why ABBV trades at just 8 times forward-looking earnings. The acquisition of Allergan, which itself is expected to close later this quarter, is why I think that 8 times is too cheap.

Of course, the entire industry is under constant political pressure from both sides of the aisle in Washington, D.C., and this is an election year. That's another reason why this just might be a bargain. At least that's what I think. Everyone has an opinion. This is mine. 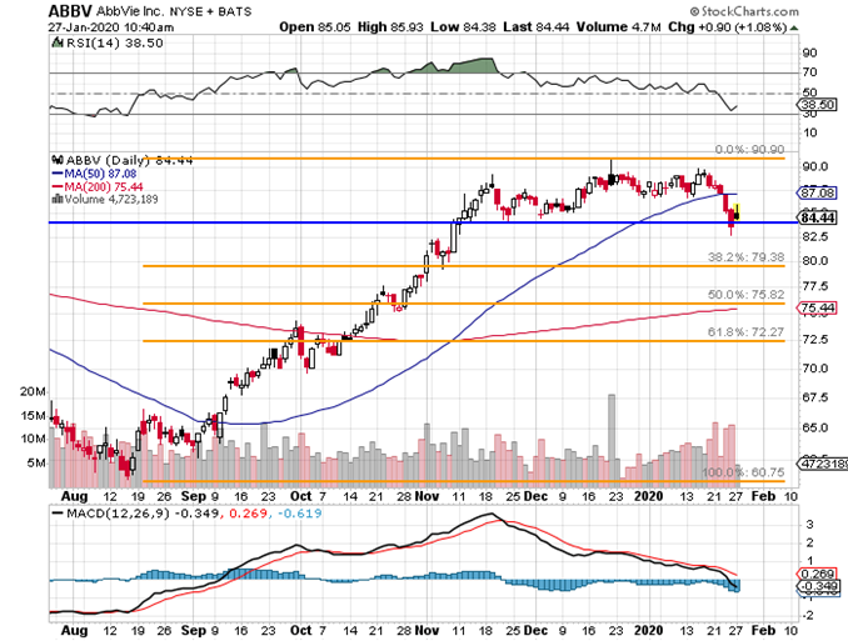 Don't kid yourself, though. There is danger here.

I drew up some Fibonacci levels for you in orange, above. I also want you to see the period of consolidation bounded by the December high, and November / December support in purple. That support was indeed pierced to the downside last week. It is key, however, that on today's news events, ABBV regained that level in a down tape.

Should the shares fail in testing this line, and should there be any hiccups in moving toward that deal with Allergan, the $80 level, or even $75 become real possibilities. My net basis is just above $76, so I have the tolerance.

For me, if the deal with Allergan is still actively being worked toward, those levels are where I back up the truck. If the deal is for some unforeseen reason doubtful, $75 becomes a strict panic point. In other words, there is no "set it and forget it" here.

This is name that must be actively managed. Can you buy it right here? I think you can.

(AbbVie is a holding in Jim Cramer's Action Alerts PLUS member club. Want to be alerted before Jim Cramer buys or sells ABBV? Learn more now.)

Get an email alert each time I write an article for Real Money. Click the "+Follow" next to my byline to this article.
TAGS: Investing | Markets | Stocks | Trading | Healthcare | Stock of the Day | Earnings Preview