Expanding on my example from Monday morning, it looks like Monty Hall and Carol Merrill of "Let's Make a Deal" were quite busy on the day, trying to decide which door to choose. The early going had door No. 3, where the handful of high-flying tech stocks were the way to go and the down and outers were lagging.

Then midday rolled around and we were heading for door No. 1, where the down and outers were leading. But at the end of the day, I think we got a combination of Door No. 1 and Door No 2. (If you missed my last two columns, then you should know that on Friday, I set out three options for the market: The first is that the down-and-out stocks lift themselves up off the mat and join the party; the second is that Nasdaq and those beloved tech stocks come down, taking the indexes down, too; and the third is that the divergences continue.)

Monday's combination is that down and outers did better, while the growth hot names came down.

But everyone wants to know why. Why did we reverse?

Some would like to credit the news that California was shutting down again. To this, I would ask: Why did the work-from-home stocks get hit so hard and the return-to-work stocks hold up relatively well? Not to mention the market had started to lose some flight well before that news came out.

OK, I have also heard that taxes are due on Wednesday. Makes sense, right? Folks have to pay their taxes. But did they look at the calendar -- and the clock -- at noon on Monday -- July 13 -- and say, "Oops! I have to sell some stock to pay my taxes in 48 hours"? That too seems a bit of a stretch.

If I had to put my finger on it, and I am simply speculating like everyone else, I would say folks had simply gotten too bullish. We had the Nasdaq Daily Sentiment Index (DSI) over 90 for several days, too, and sentiment had gotten quite bulled up. It was so much so that the nine-day moving average was 90. We also had that poll I ran on Saturday on Twitter that showed 54% of respondents were looking for the next 100 points in the S&P to be up, which being a contrarian, one would take the other side of that trade.

We also had the relentlessly low put/call ratios and the narrowing market since early June; see the declining McClellan Summation Index.

People always make a fuss over reversals. I think because they tend to be so dramatic. If I had to come up with one bullish aspect of the decline on Nasdaq, it would be that the volume in the Invesco QQQ (QQQ)  finally lifted. It is interesting that it wasn't even as high as the early June volume decline was, though. 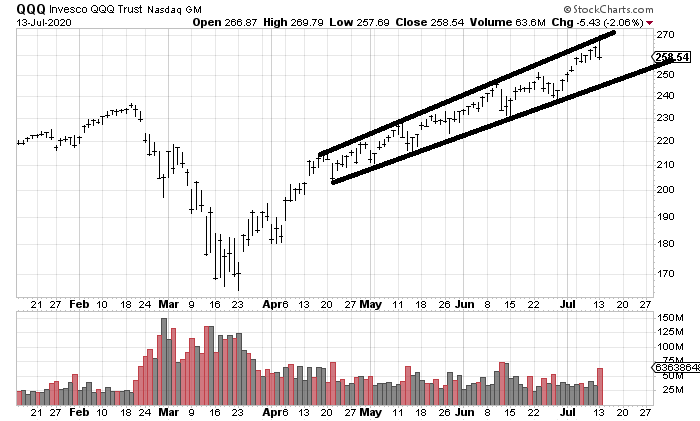 I think one difference is that on Monday, there was a great deal of selling in individual stocks and it came on good volume, as well, so perhaps the volume was spread out. Either way, the channel remains intact for now, and maybe just maybe the QQQs can come down and visit the lower line as they have in every other pullback since April.