Does anyone remember what panic selling looks like? What it feels like? You know the sort of selling I mean, where we get 90% of the volume on the downside, where volume soars, where it almost feels like a frenzy.

What we have had since last summer is an either/or market. If big-cap tech stocks rally, then everything else sits is out and vice versa. So, we never seem to get that whoosh, that clean-out, that all-encompassing selling that feels so capitulatory and exhaustive.

Often that capitulatory selling would come as some well watched level was broken. Sometimes, it is a 200-day moving average line, sometimes it is simply a support level. Take a look at the chart of the Russell 2000 fund (IWM) . Sure, the line is up-slanting, but there are now (roughly) five touches on that line. Don't you think breaking it would be an attention-getter?

Thursday's rally was crummy. Breadth was mediocre, but more than that, the number of stocks making new lows was on the rise again. The selling that dried up on Wednesday materialized again on Thursday. When you get a capitulatory whoosh, you don't get that because the selling has been done; when you don't get that whoosh, folks look to sell rallies.

The former hot stocks are clearly in the dog house now. Two weeks ago, I wrote about how ARK Innovation (ARKK)  looked so similar to the Invesco QQQ fund (QQQ) did in 2000. Now, ARKK has broken, but does that look capitulatory? It looks oversold, but where's the whoosh?

Sentiment is turning, though. The National Association of Active Investment Managers (NAAIM) which had increased their exposure to the market to just over 100 a few short weeks ago, has now pared back in a significant manner. Their exposure is now at 46, which happens to be the lowest reading since we came out of the depths in March 2020.

Just think for a minute if that chart of IWM could break that line and get a whoosh where this NAAIM Exposure Index would be. I would say at least 40, maybe lower. And that would look like we had some fear in the market, wouldn't it? 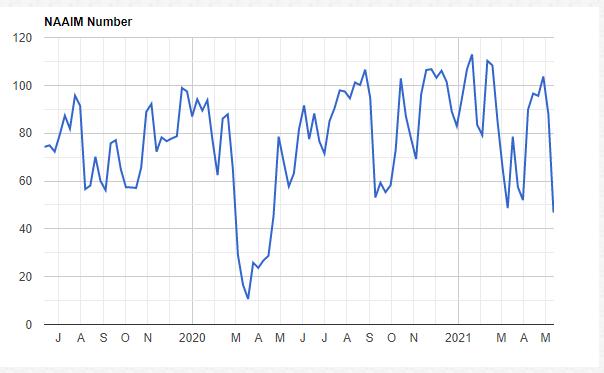 We've already seen the 10-day moving average of the put/call ratio on the rise. So, once again, imagine if that well watched line broke, this moving average might shoot up over 1.05 in a hurry wouldn't it? It's already just under .95 now.

The 21-day moving average of the put/call ratio for exchange-traded funds is still pretty low, but the last few days the readings have been over 1.50 after being below 1.0 for weeks. Since this is a 21-day moving average, it will take more time to move it, but if we got some panic, it would finally shoot up, wouldn't it? 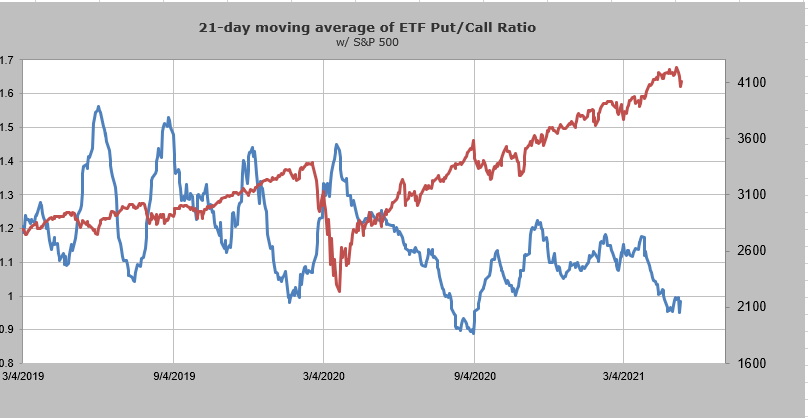 If we got some sort of whoosh in the next week, it would be a positive, because while currently moderately oversold, a whoosh would make the market extremely oversold.

So are whooshes a thing of the past?