The stock market is a never-ending marvel. It never ceases to amaze new students and long-time observers and analysts alike. It has captured my interest since I was ten years of age when my late Uncle Sydney showed me how to read the Wall Street Journal.

While the securities business and stock trading has changed dramatically over the 50 years I have been involved there have been some constants that have marked tops and bottoms if you look close enough and learn to be flexible.

The U.S. stock market has been in a secular uptrend since the end of 2008/beginning of 2009. A secular uptrend comprises a number of cycles to the upside. There was a secular bull market from 1982 to 2000 where the DJIA rose some 1,400%. This current secular uptrend has further to go after this medium-term top runs its course.

A Kitchin cycle of 40 months, well researched by Joseph Kitchin back in the 1920s, and the later work of Joseph Schumpeter does not make it into typical Wall Street research reports. P/E ratios and valuation models are the norm. But cycles exist nevertheless.

What do we observe at cyclical highs?

2. Sentiment about stocks will be frothy. SPAC anyone? Check.

3. The number of IPOs increases and their "stories" are less compelling and earnings are less visible. Check.

5. A mentality of "buy the dip" (or put writing) becomes prevalent. Check.

6. The breadth of the rally narrows down to a handful of outperformers. Check.

7. If we ever get to go to an in-person cocktail party again and someone asked about the latest IPO of a Chinese technology company. Check

We can usually spot these markers better after the fact, but they are there in real time as they unfold. Each market cycle is a little bit different so that is when experience becomes a valued asset.

Even with years of experience learned the hard way, catching the turns in the market is not easy and certainly not always successful.

In late August/early September the major indices and averages here and around the world were making medium-term tops.

In the weekly Japanese candlestick chart of the Nasdaq 100 ETF ( QQQ) , below, we can see the peak.
At the end of August there is a bearish engulfing pattern. The On-Balance-Volume (OBV) line turns down telling us that sellers have become more aggressive and the 12-week price momentum study was showing lower highs from June into late August creating a bearish divergence between the movement of the indicator and the movement of the index. The pace of the rally was slowing.

Now, let's look at three advance-decline lines.
The advance-decline line is an indicator of market breadth that dates back to the 1920s and research done by Col. Leonard P. Ayres. Technical analysts have found that this indicator tends to lead the broader market tops by up to four to six months. (The A-D line peaked with the stock market in 1937 and again in 1977 for you market history buffs.)
The Nasdaq advance-decline line showed months of declining data. 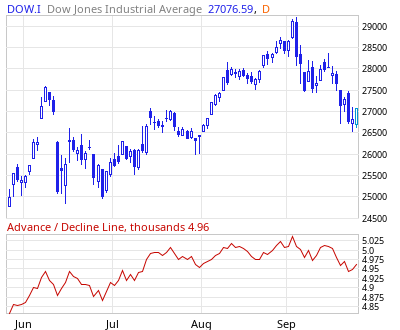 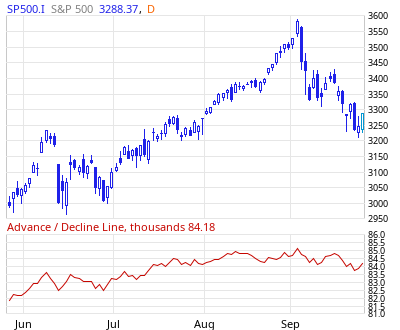 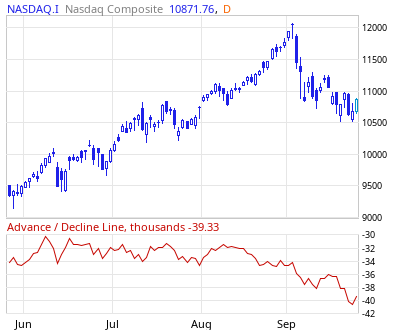 How long and how far will this stock market decline carry?
This is the $64,000 question for those readers who may actually remember that TV program.
In this Point and Figure chart of the S&P 500 Index (below) we can see that prices have broken an uptrend and have started a downtrend. 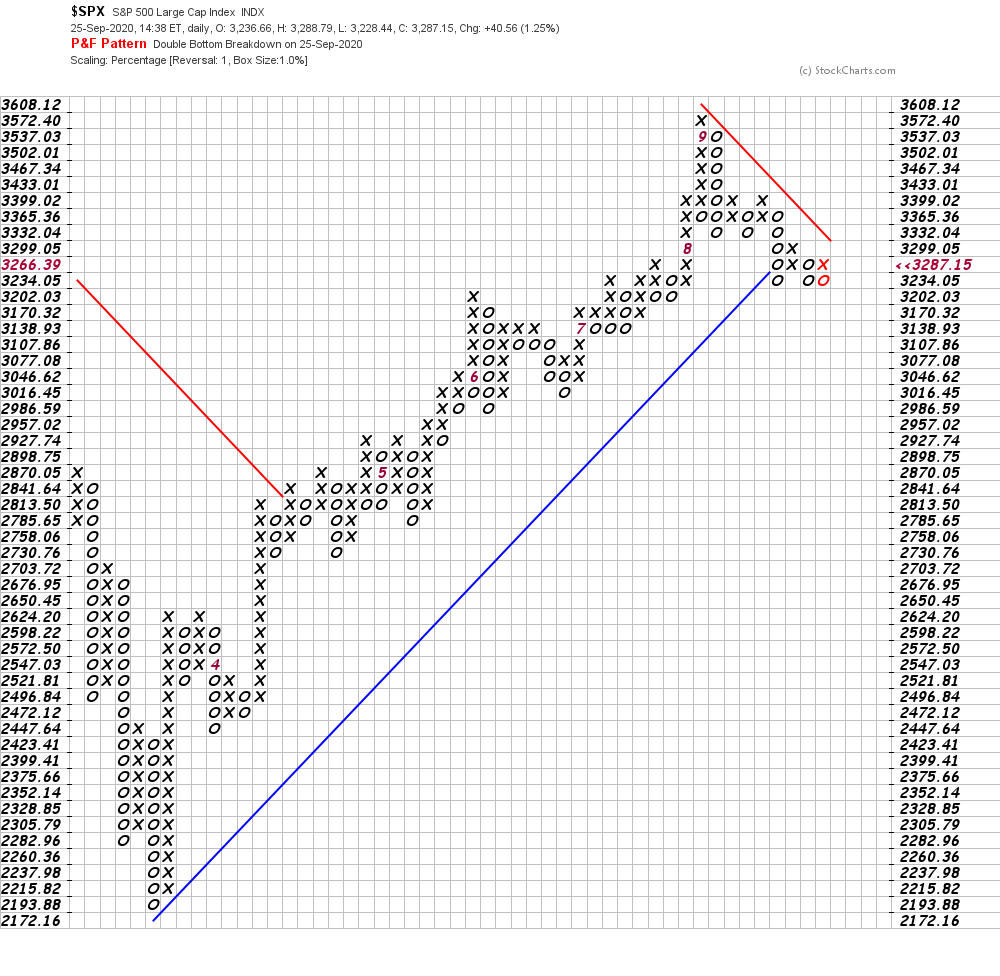 In this S&P 500 chart with moving average envelopes we can get an idea of where buyers might become interested. Prices could overshoot the lower envelope so do not be in a rush to buy. 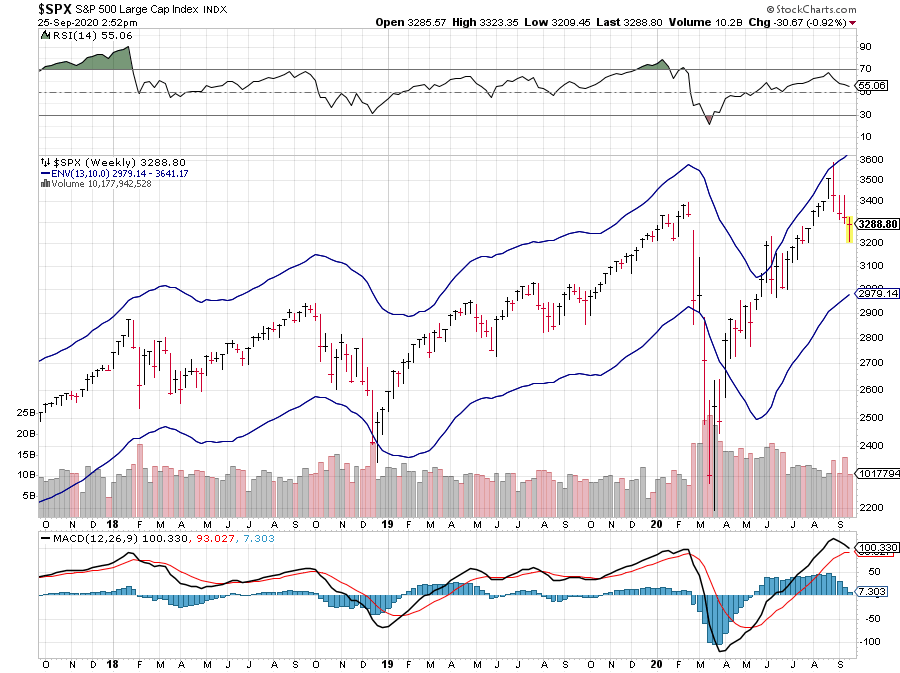 In this Nasdaq Point and Figure chart, below, we can see a potential price target in the 9,600 area. 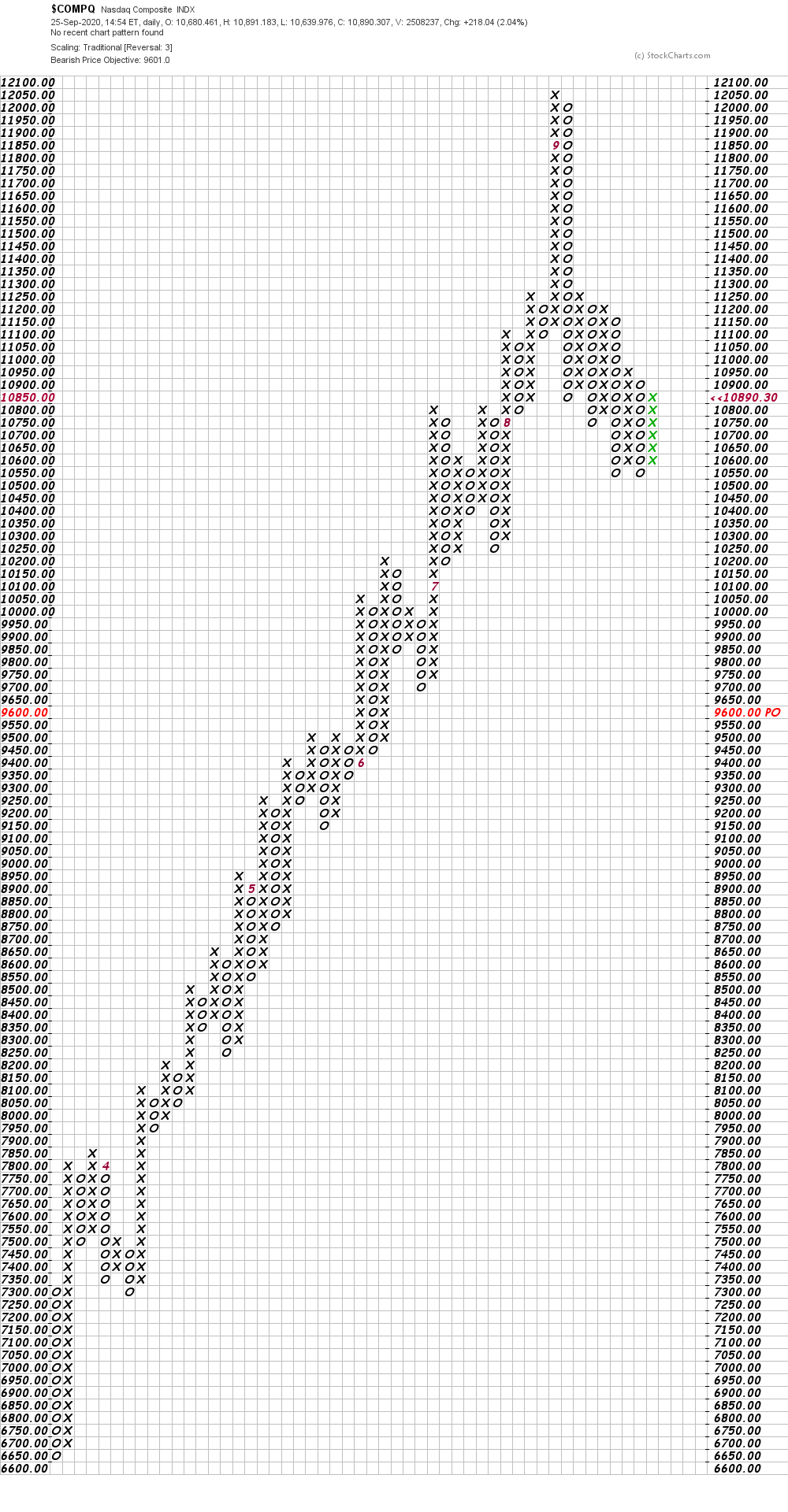 While having a tentative price target is helpful in spotting a bottom it should be secondary to timing and direction.
I want to see traders and investors turn from being bullish to bearish and discouraged.
I want to see the market display a pattern of accumulation, which can be fewer new lows being made, stronger volume on up closes, and ignoring bearish news.
Drilling down to the 11 sectors I want to see lows and successful retests on maybe six sectors to be encouraged to recommit capital.
Get an email alert each time I write an article for Real Money. Click the "+Follow" next to my byline to this article.
TAGS: Indexes | Investing | Markets | Stocks | Technical Analysis | Trading | U.S. Equity

Here's how we would play RL stock now.

Take a neutral stance with HD for now.

Are videogame makers like Tencent and NetEase the latest targets in the Communist Party's bid to curb Big Tech?