I like to watch patterns for a few reasons. The first is that when a pattern becomes too obvious, the market usually changes the pattern, just to keep us all on our toes. The other reason is because a change in pattern can often signal a change in whatever trend we've been in.

I noticed that the S&P and Nasdaq have both been red for three straight trading days. What surprised me is that in the entire move down from early April, they have never gone more than three straight days in the red. The last time was early March. The PHLX Semiconductor Sector index hasn't done it since mid-February.

That is part of the issue with the market, though. It hasn't gotten sufficiently oversold, because it keeps rallying every three days. If we could get a slew of red days in a row that would get us to a super oversold condition. But it's not the way the market has been.

Another sign that nothing has gotten extreme is that when I calculate what it will take the halt the decline in the McClellan Summation Index we now stand at positive 3,600. That means the net breadth on the New York Stock Exchange (advancers minus decliners) would have to be positive 3,600 or more to halt the indicator from continuing lower. That makes it oversold. But you know what? Positive 4,000 or more is extremely oversold. Notice how oversold (positive 5,000) it was at the January lows.

The selling has been persistent but not panicky. 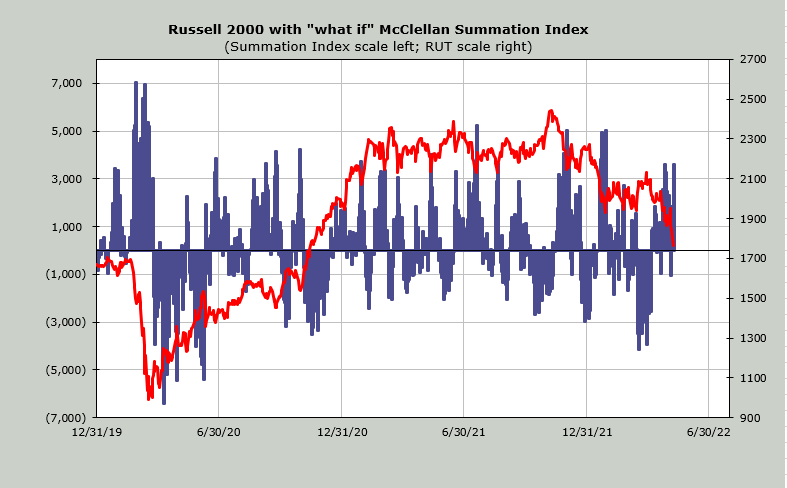 Did you notice another change in pattern on Monday? Folks finally sold their beloved energy stocks. When winners get sold, it usually means folks are a little nervous. And another change? They stopped selling bonds. At least for the day, that Daily Sentiment Index (DSI) reading of single digits (9) for bonds led to a rally. Stocks didn't much care, but bonds did react and that's what we want to see.

Speaking of the DSI, both the S&P and Nasdaq finally got to single digit readings (9). So if we couple the single digit reading in the DSI with the oversold condition and the fact that the pattern is to go only three red days in a row, we ought to have our weekly rally day on Tuesday.

Oh, sure, I say that part in jest and part serious, but that's really the way the pattern has played out. So why should it stop now? 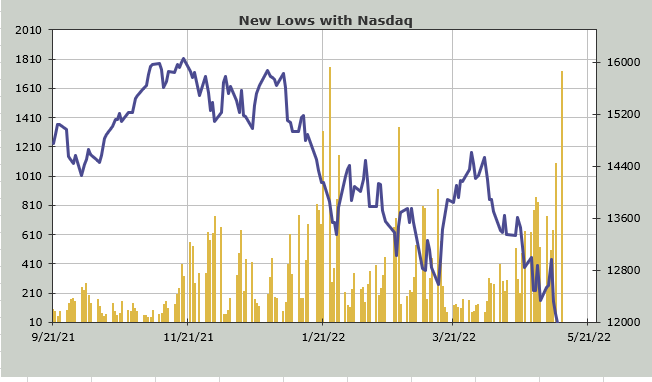 Finally, I would note that the New York Stock Exchange saw a large increase in the number of stocks making new lows, far more than it saw in March. The Nasdaq is closing in on its January reading of 1,792 but so far on Monday there were 1,724. So fewer by pennies.

Get an email alert each time I write an article for Real Money. Click the "+Follow" next to my byline to this article.
TAGS: Investing | Rates and Bonds | Stocks | Technical Analysis |