Let's begin with breadth. There seems to be some confusion on my view here. I have noted for the last few days breadth has lagged. And it lagged again on Tuesday, despite putting in a better showing than the last few days.

Several weeks ago when the S&P was tracking lower (brown line) breadth was improving (blue line). Look at the higher low in breadth from the July low to the August low, despite the S&P taking out that July low in August. Then, in September, the S&P tracked lower and breadth made yet another higher low. This was one aspect that had me optimistic about the market a few weeks ago.

Now look at the green box. That is the action since last Thursday, Oct. 14. It is still trending higher, but in that same time the S&P has gained 80 points. Breadth has stopped leading. Should that continue, or worse, should breadth turn south as the S&P powers ahead, that would be negative. For now, it's a shift I am attributing to breadth getting a little overbought late last week.

After all, the McClellan Summation Index, as of last Thursday's close, needed a net differential of net negative 2,700 issues (advancers minus decliners on the New York Stock Exchange) to halt its rise. When this gets to negative 2,000 or more, we have stepped a toe into overbought territory. Now this number is negative 1,900, so it is no longer overbought. It also has a cushion where a few down days shouldn't turn the Summation Index south.

The biggest shift since last Thursday, though, is in sentiment. Where have all the bears gone? Two weeks ago the Investors Intelligence Bulls were at 40%. A week ago they had only limped up to 42%. When they are released on Wednesday I expect they will be higher. But an extreme in this indicator is back in the 60% range and I doubt it will be up there. 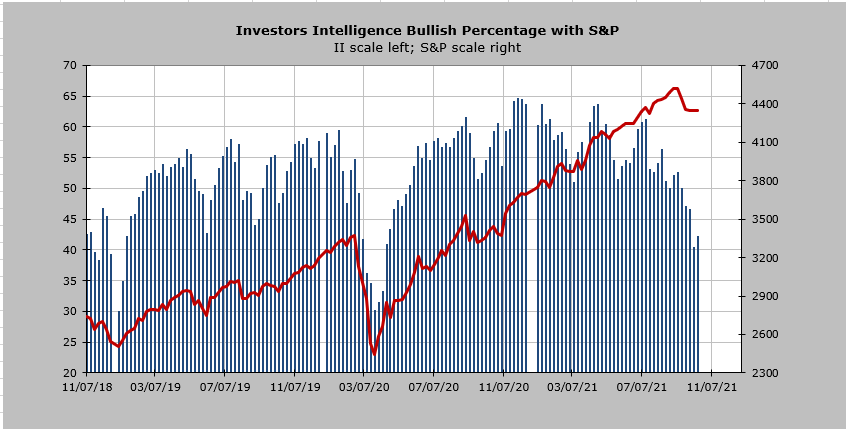 The equity put/call ratio has had five-straight days where the reading is under .50, something it hasn't seen since late August. You can see on the chart of the ten day moving average that it has finally begun to fall.

Then there is the Daily Sentiment Index (DSI), which is now at 82 for Nasdaq. A week ago, it was at 57. As a reminder a reading over 90 is a red flag. The DSI for the Volatility Index is at 15. A reading in the single-digits is a red flag.

In my view a pullback would be healthy in that it would cool off some of the newfound bulls and would likely not push breadth down far enough to turn the indicators back down. But that doesn't mean we shouldn't be aware of the shifts that have taken place in the last few days.