The recent market trading action appears to be a period of consolidation. However, we would like to see insiders stepping up to the buy window more aggressively for some validation of this view.

Let's assess the index charts and market data as we look forward. 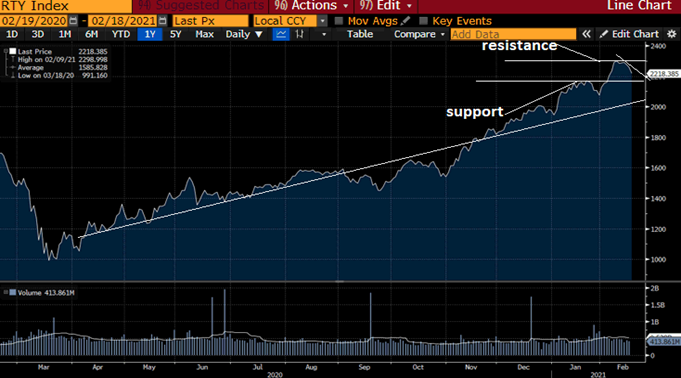 All the equity indices closed lower Thursday with negative internals on heavier trading volumes for the NYSE and Nasdaq. However, late session buying lifted most near their intraday high levels.

The weakness did not result in any violations of support or trend on the charts, leaving all in near-term uptrends except for the Russell 2000 (see above), which is short-term negative.

Bearish stochastic crossover signals were generated on the Nasdaq Composite, Nasdaq 100 and MidCap 400 but are not yet actionable as supports held.

Market breadth did take a hit with the cumulative advance/decline lines for the NYSE and Nasdaq turning negative.

Nonetheless, the charts, in our opinion, have not generated sell signals with the exception of the Russell 2000.

However, the Open Insider Buy/Sell Ratio/Rydex Ratio dynamic remains cautionary. The OI B/S has lifted slightly to 17.3 but remains in bearish territory. They have yet to exhibit an appetite for buying.

In contrast, the leveraged ETF traders measured by the detrended Rydex Ratio (contrarian indicator) are still leveraged long at 1.32 but less so than the prior session. We would like to see some further moderation in this dynamic to become more positive.

The forward 12-month consensus earnings estimate for the S&P 500 from Bloomberg of $172.30 per share leaves the S&P's forward P/E multiple at 22.7x, while the "rule of 20" finds fair value at 18.7x. Again, the valuation spread has been consistently wide over the past several months while the forward estimates have continued to rise consistently.

At this stage, the technical action looks like consolidation. However, the insider/Rydex action needs to be more inspiring to move us from our current "neutral" outlook for equities in general.