With the election only a few weeks away and the start of the fourth quarter only a little more than a week old now is a good time to take a look at the technical picture around the most popular indices.

This week's action in the SPDR S&P 500 ETF Trust (SPY) may prove a pivotal point for the fourth quarter.

We'll market the $335 area as our line in the sand. It's just below the 10-week simple moving average (SMA) and lines up well with the weekly lows.

After six weeks of consolidation, the SPY broke out from its recent bullish flag (pullback). This consolidation comes after a long period of movement higher. This sets us up for a potentially huge move higher in quarter four.

What investors will want to see now is the Full Stochastics turned higher. Note how the %K (black line) has stopped its descent right at the midline. Next, we want to see it turn higher and cross bullishly above the red line. Any drop below the $335 line could find support around the 21-week SMA, but things become much more tenuous under $335.

A weekly close above $350 should really get the momentum juices flowing. I imagine we'll test that in the upcoming week. 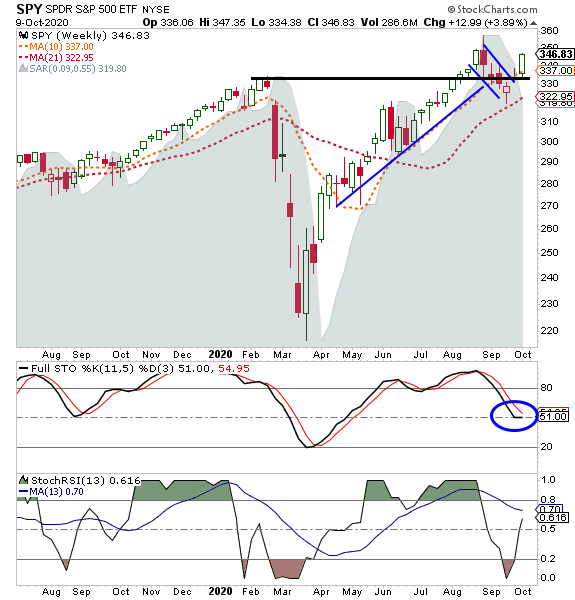 Ironically, the weekly chart of the gold ETF (GLD) appears to be the shadow of the S&P 500. It's headed the same direction, but trailing slightly behind. Next week, traders will want to watch for a move above $182.25. This would put Gold above both the 10-week SMA and the resistance level of the bullish flag.

Unlike the S&P 500, the Full Stochastics indicator did not find support at the midline. Also, the StochRSI has been weaker, but it is turning higher. Again, this is similar to what the SPY looked like just a few weeks ago.

A close under $175 puts the consolidation flag at risk, creating a more neutral view of gold. 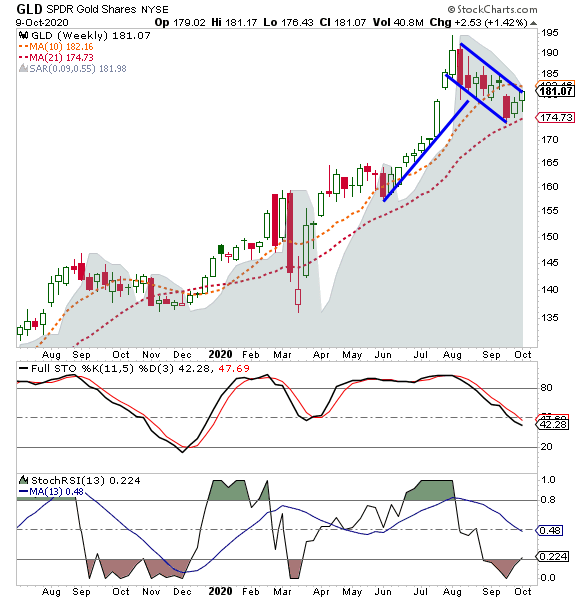 Tech names continue to perform well. The current price pattern of the Nasdaq 100 ETF (QQQ) resembles one from a year ago. If we see the turn higher on the Full Stochastics and push on the StochRSI, we could be setting up for another November through February rally.

The price action resembles a cup-and-handle pattern although we're early in the handle formation right here. Another two weeks of trading between $275 and $290 would help solidify the pattern.

Traders will want to keep eyes on the 10-week SMA and 21-week SMA. The 10-week SMA has been particularly influential to the decisions of traders, so that is where I would keep my focus.

Currently, I see the SPY as a bit easier to read and a strong bullish setup. 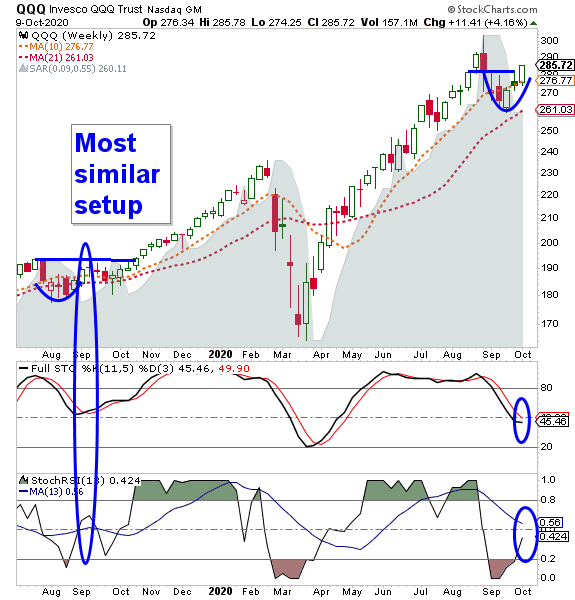 Small-caps led the way this past week. While the move in the Russell 2000 ETF (IWM) was strong, it leaves us in a bullish no man's land.

The challenge here is we have those highs from the start of 2020 staring us in the face. That makes for a tough buying opportunity as resistance is only a few dollars higher while support is the same amount, if not more, to the downside.

The play on IWM is to wait for it to break through new highs, pull back for a small retest, then buy on the next pass through. Fortunately, we do appear to have a bullish crossover in the Full Stochastics with a strong StochRSI, so any downside should be bought by market players initially. 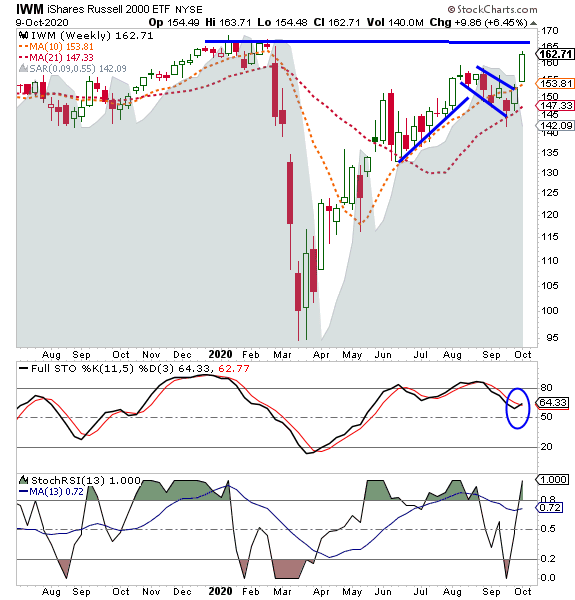 That's my look at the overall markets this weekend. The idea of strength remains well entrenched in the charts.

Get an email alert each time I write an article for Real Money. Click the "+Follow" next to my byline to this article.
TAGS: Gold | Indexes | Investing | Small Cap | Stocks | Technical Analysis | Trading | U.S. Equity