Four of the major market indices made new closing highs Friday with the bulk of the charts staying in near-term uptrends. The data remains generally neutral, with the exception of some of the sentiment indicators.

While valuation continues to appear extended, the current technical and data landscape has us maintaining our "neutral/positive" macro-outlook for equities. 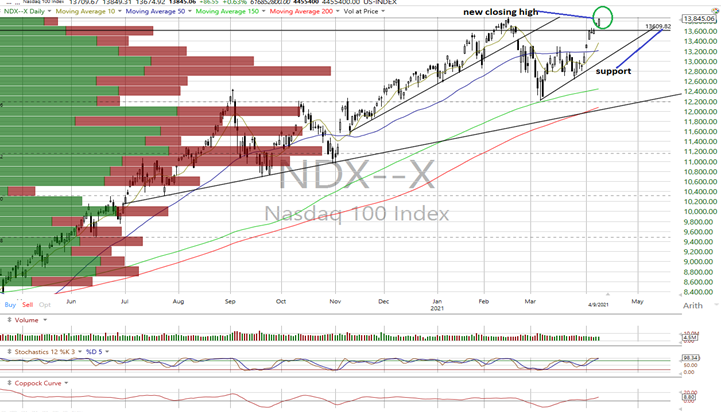 The major equity indices closed higher Friday with NYSE internals positive and the NASDAQ's negative. All occurred on lower-than-prior volumes.

The S&P 500, DJIA, and Dow Jones Transports made new closing highs. The Nasdaq 100 finally made a new closing high as well reflecting some positive action among the FAANG stocks that had been lagging due to some recent market rotation.

The near-term trends remain positive on all but the Russell 2000, which remains neutral.

Regarding market breadth, the NYSE and All Exchange cumulative advance/decline lines remain positive with the Nasdaq A/D staying neutral.

The data is generally neutral with the exception of some of the sentiment indicators.

Looking at sentiment, the Rydex Ratio (contrarian indicator) measuring the action of the leveraged ETF traders, however, lifted to 1.3 and remains bearish with said traders leveraged long.

Valuation still appears extended with the forward 12-month consensus earnings estimate for the S&P 500 from Bloomberg at $181.89 per share. This leaves the S&P's forward P/E multiple at 22.7x while the "rule of 20" finds fair value at 18.3x. We reiterate the valuation spread has been consistently wide over the past several months while the forward estimates have risen rather consistently.

The 10-year Treasury yield rose to 1.67%. It remains in an uptrend with potential to test the 1.8% level with support at 1.55% but appears to have stabilized for the short term. We continue to monitor it closely as it has been having rather significant influence on the equity markets of late.

The lack of sell signals on the charts, which remain generally bullish, combined with the data suggest we maintain our near-term "neutral/positive" macro-outlook until the evidence suggests otherwise.

Get an email alert each time I write an article for Real Money. Click the "+Follow" next to my byline to this article.
TAGS: Indexes | Investing | Stocks | Technical Analysis | Trading | Treasury Bonds