After the Crash of 1987, folks were convinced we would go into a recession. We spent the year so focused on every single economic data point that came out, even the Money Supply releases after the close each Thursday. Folks spent much of the year hoping for worse economic data, so that the Fed would be forced to ease.

You know what happened in 1988? The market went sideways almost the entire year. It eventually lifted near year end and into 1989, but the majority of the year the S&P traded between 250 and 280. And haven't we gone sideways since last spring?

I don't know what the employment report will bring, nor do I even have an inkling of how the market will react to it, but this three-week chop is quite frustrating and I am at the point where I want the S&P to break down, under 3800.

Why? Because so far the number of stocks making new lows has not expanded, even to where it was a few weeks ago. 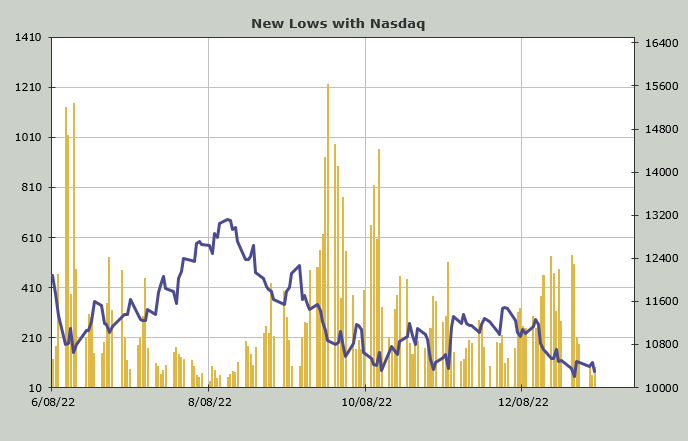 Because, despite the S&P giving up the entire rally from Wednesday, breadth gave up very little of what it gained on Wednesday. If we add up the two days, we get the S&P down 16 points and net breadth positive by about 1400.

The Daily Sentiment Index (DSI) for Nasdaq is now at 12, so a break down here would surely take it to single digits. The DSI for the S&P is at 15, so it might take more than one day down to get that to single digits.

Keep in mind the intermediate-term indicators are still not oversold, nor is the short-term for that matter. But at least if we break this level we've been toying with, we could see what a whoosh would look like, we could see how much selling there still is. And a break would probably at least lead us to a short term rally.

One final note on the options ratios. I wrote about a month ago that it seemed the CBOE equity options had been corrupted and I still believe that to be the case. I don't yet know if the exchange-traded fund and Volatility Index put/call ratios have been. So far they still look OK to me.

I have been using the International Securities Exchange call/put ratio, which so far looks like it still gives us a decent read. With that in mind, take a look at the 21-day moving average of this metric. Remember it is a call/put ratio, so a low reading is bullish and a high reading is bearish. The moving average has come down quite a bit since Thanksgiving. It is not yet at a low enough level for me to believe bearishness is pervasive, but at least it has come off the complacency we saw just over a month ago.