It's like the old EF Hutton commercials from the 1980s, "When EF Hutton talks, people listen." Yeah, Stephen Tusa of J.P. Morgan gets that kind of respect when it comes to General Electric (GE) .

Indeed, it becomes difficult to argue that anything matters more to price discovery when it comes to GE than the opinion of Tusa, perhaps the top and possibly most accurate analyst covering this name.

This is the deal in short. Tusa put in just a bit of detail in his 123-page morning note on Monday. The headline takeaways are that Tusa cut GE back to "Underweight" from "Neutral," while also reducing his 12-month price target to $5 from $6.

Tusa claims a disconnect between earnings and free cash flow. The following is excepted form the piece: "We believe many investors are underestimating the severity of the challenges and underlying risks at GE, while overestimating the value of small positives, and with a 38% move in the stock year to date, and cuts of more than 50% to forward fundamental free cash flow anchors, we are cutting our target, and moving to Underweight."

A mouthful that says a lot.

At the moment, Tusa sees no free cash flow at the firm's industrial businesses in 2019, while projecting earnings of just $0.29 per share for the year. The industry view is up around $0.56.

Tusa, if anything, is certainly thorough. He cites weakness at GE Power, mentions the cash burn at GE Capital Services, and even talks about softer fundamentals in aviation than other observers are seeing.

Salt in the Wound

With the shares trading down more than 5% in the pre-opening session, came news that the European Union would fine General Electric $58 million for misleading information it says that GE provided two years ago, when the firm acquired LM Wind, and Danish manufacturer of rotor blades. Sometimes, when it rains...

I won't be taking any equity positions in General Electric for the time being. That said, I make promises regarding the trading of low probability options bearing both far off expiration dates and strike prices. 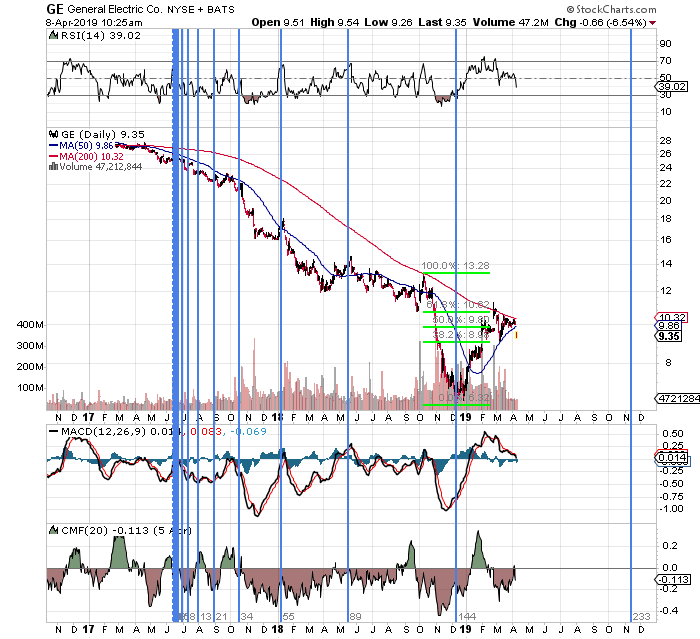 I have noticed something about General Electric. Yes, the rough obedience to Fibonacci levels regarding price are obvious, at least over the past few months. What's even more interesting is the respect that the chart pays to Fibonacci time sequencing. Simply remarkable.

Beginning with the selloff when the shares were trading in the mid-$20's back in June 2017, every Fibonacci time line has corresponded with either a short-term high, or a short term low. We do not see another of these lines making itself apparent until November.

Does that mean investors have seven months to figure something out? I would not say that, but I wouldn't forget about it either.

I am long October $16 calls and January $20 calls in some size regarding the name. These cost me pennies and are only down pennies (or less) from where purchased. Low risk. Potential reward. Not counting on it.

You could buy yourself a number one at your favorite fast food joint tonight, or you could do something like this. Remember, you don't need the stock to actually get there to make money, you just need at least one good run in the underlying equity at some point in time prior to expiration.

Then you pick off the algos running the options markets, and they never realize that someone was hiding in the weeds waiting for them.

I expect that I'll get long some $5 November puts at some point today. They are currently worth roughly $0.07.

Play the stock? Haven't I told you? When Stephen Tusa writes...

How to Play a Soaring Shopify

The new high in the OBV line could be foreshadowing all-time highs for SHOP.