I began the week thinking we could see a down day or two. Let me be clear: Tuesday's decline was not what I had in mind. Yet, that is what the market gave us.

After days like Tuesday, I like to stick to statistics, because it is so easy to get emotional after a decline of that magnitude. Breadth was terrible. But you don't need me to tell you that, do you?

Yet, I would like you to take a look at the chart of breadth (blue line) with that of the S&P (brown line) and notice that the S&P 500 is incredibly close to breaking last week's low, while breadth still has some way to go. That means it is possible that the S&P can break 3900 and breadth might be at a higher low. I'll be watching that relationship.

The McClellan Summation Index has been heading down and even during the four up days never stopped heading down. The closest it came was Monday it stopped going down for the day, never really turning upward. There are a few things to note here. First of all, just over a week ago when the S&P was at 3900 this indicator required a net differential of advancers minus decliners on the New York Stock Exchange of positive 5,300 to halt the decline; it's what made the market oversold. It will enter Tuesday morning with that number at positive 1,200.

What that tells us is that a week ago, it would have taken a Herculean effort to turn from down to up, but this week it wouldn't take much. Again, I will watch that.

Should the bulls take charge and the market rally -- and breadth along with it -- then this is still at a much higher low than it was in the May and June period.

Then there are the new lows. Shockingly, they did not expand greatly during Tuesday's rout. Just prior to Labor Day, the NYSE had 252 new lows (the last time the S&P visited 3900). Tuesday there were 105 new lows. Should the S&P crack under 3900 in a hurry, and there are fewer than 252 new lows, I'd consider that a positive. 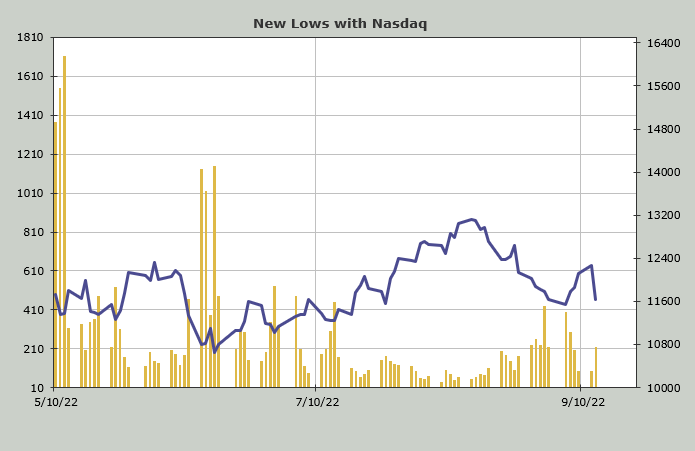 Speaking of the Daily Sentiment Index, I suppose, because the yield on the 30-year bond was down on Tuesday, the reading for bonds nudged to 12, not single digits.

But I still think the reversal in bonds -- via the bond fund (TLT) -- off that steep channel is worth a short-term trade.