We're polishing off our third straight week lower in the iShares Russell 2000 ETF (IWM) . The nearly 5% drop is the worst in quite some time along with the ugly red candle we saw in June. Over the past year, this is the closest we've seen two weekly red candles of that size.

We did have some big intra-week drops back in February and March, but those both recovered more than half the losses by the end of the week. This time we're going out on lows. When that happened in June, we did see a bounce the following week that reversed the entire loss; however, that came while the market was in an uptrend, and we were testing the 21-week simple moving average (SMA).

None of those technical strengths sit with us now. 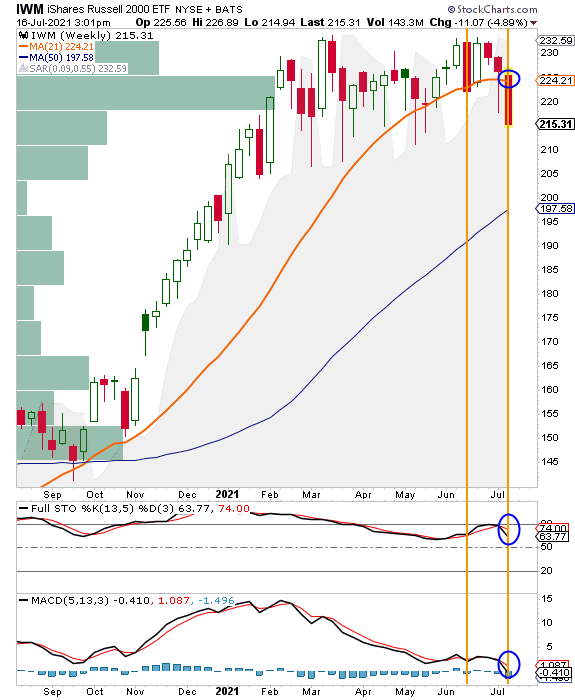 Sentiment, at least with the folks I talk with week to week, has hit a new low. It's a battle between hopelessness and giving up.

With large-caps finally starting to falter as well, I'm not sure what will stop the bleeding. Even though we talk about a 7% pullback in the IWM, I've seen many more individual names fall 15%, 20%, or much more in July.

The problem is I don't think we've gotten anything close to a capitulation. The decline has been death by a thousand papercuts as stocks have been walked lower day by day in an orderly fashion rather than a rip off the band-aid sharp down day where indexes see a 5% to 7% drop, then bounce from the lows to cut losses.

At this point, make sure you can sleep, but I'd want to be able to buckle in on names I own and ride through the storm. I mentioned Thursday that if you have your buy list and cash to put to work that scaling in would likely be best as you might find yourself adding 10% lower in quick fashion then another 15% lower in just as quick fashion. It's fair to see we've seen plenty of 5% to 10% drops today. Granted, more the weakness I'm seeing is closer to that 5% level, but right now we're not demonstrating signs of stopping or reversing the current trends.

Maybe next week will be different but "maybe" isn't a convincing word. However, it's the best I have to offer.

Get an email alert each time I write an article for Real Money. Click the "+Follow" next to my byline to this article.
TAGS: ETFs | Investing | Markets | Small Cap | Stocks | Technical Analysis | Trading