I watch a lot of financial television. Much of the time I have the mute on, but I find it gives me a good sense of sentiment to listen to the traders and pundits interviewed.

There was a whole host of folks who were quite bearish at the lows, which is fine, not everyone is a contrarian, and they stayed bearish until around late May, so about two months. What struck me was their narratives. For two months, we heard that the economy wasn't good, earnings would be poor, you couldn't value this this once-in-a-century event, all the usual suspects. You know the drill.

But slowly they turned bullish. Their reasoning? The Fed has your back.

So, wait, the Fed had your back in March when it started cutting rates. The Fed had your back when it said it would support in any way it could. Yet it wasn't until the latter part of May that people decided this was a good thing. And once they turned, nothing was going to sway them back to what had been their stance for the better part of two months.

The refrain I hear now is that they are bullish, because of the Fed, because once we have a vaccine it will all be good again (weren't these same factors in place in April too?). But there is a nuance to it. They are bullish, but can't find stuff to buy. Prices seemingly are not low enough for them. This is what I don't understand. If you want lower prices to buy, then how are you bullish here? And if you can't find anything to buy, then why are you bullish here?

Then there is the thing where the banks, which everyone adored two weeks ago and are now 15% lower so they should be attractive, but somehow they are what? Not down far enough? Or all those "back to work" stocks, you know the economically sensitive ones that are down 10% to 20% in some cases. Are those not down far enough if you're bullish? Maybe they are not really bullish but they think they have to be because of the Fed?

In any event, we got a sell off and one that saw the beloved technology stocks join on the downside. We looked Tuesday at this channel in the Nasdaq and it is still intact. Each pullback has eventually made its way to the lower line and I expect this time will be no different.

It might not happen Thursday, because there was 90% of the volume on the downside, which often leads to a short-term bounce. But the Summation Index is heading down now, so the majority of stocks are going in that direction, too. 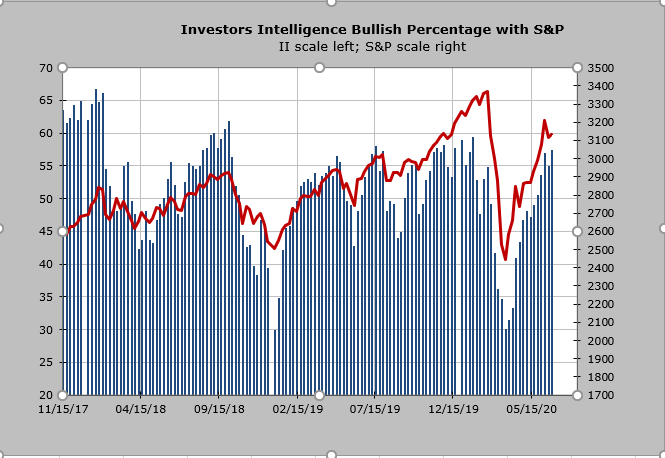 I am still eyeing that head-and-shoulders top in the chart of the small cap fund IWM (IWM) that we looked at Monday, but notice that there is the June 11 low around $134, the uptrend line around $135 and the 200-day moving average that all come in around this area. Unless the market is so weak that we gap down under it, I would expect a bounce on this first trip down there. But if this area breaks, I suspect we'll see sentiment shift back to cautious from the current complacent.