Woke up early this morning. I wake up early every morning, but this morning I woke up well before I had to. Took one look at the clock, and knew I had some time to mentally prepare prior to the "official" prep work that starts every weekday around 03:30.

I turned on the radio. Bad idea. Every story. I mean every story was one of Covid-19 related woe. From cities around the U.S. struggling with the capacity of their abilities to provide necessary health care services, to the states that now must consider reducing civil payrolls (Wonder what that will do to Initial Jobless Claims), to the rest of the planet where other nations, regardless of where they are in this pandemic, are not "in the clear." Nobody is "in the clear."

Now, it is roughly 45 minutes or so, since I crawled out of the wonderfulness of my poncho liner. Yes, I still sleep in a poncho liner. Mankind's greatest invention. Equity index futures have literally run all over the place since turning on that radio less than two hours ago. Not quite green, but everything in between unchanged and outright flirtation with a serious repricing of risk appears to be on this morning's table.

The "Ugly Stick" was out and about on Wednesday. We don't see the stick that often anymore, but on the occasion that we do, oh... is the stick ever active. Hitting bids, even discounted bids, quicker than Little Bunny Foo Foo ever could bop field mice over the head, even in his prime. In the end, the Good Fairy turned the bunny into a goonie.

One might wonder if only risk assets had a good fairy, but they do, and we know it. The Federal Reserve is the good fairy and the central bank has already been quite active. The U.S. Treasury has also been quite active. The tool there is deficit spending, and more of that will be needed if the economy will even make an attempt to weather this storm. On that front, which is no magic bean, there is certainly an ambiguity over both size and targeting. The Fed can smooth the lines of liquidity. The Fed can create money supply and purchase an array of asset classes in order to provide funding. The Treasury can try to plug holes in cash flow across multiple levels of the community.

The problem is, and you all know it already, that there can be no organic improvement made of any significance to the economic condition of the people while the pandemic spreads. It is that simple. A number of U.S. states that were home to some of the earliest economic re-openings coming out of the broader shutdown, as well as spots that were also home to some of the earlier social protests, appear to be suffering the greatest increases in the rate of Covid infection, among young people in particular.

While the reopenings I would think are certainly causation for a substantial portion of this increase, we will know more shortly regarding the impact of the protests, as some cities where there were large protests, but a little later than elsewhere (such as NYC), have not yet seen the trend of the spread turn for the worse.

Corporate news was once again made by Apple (AAPL) , where the company announced the temporary closing of another seven locations, all in Houston, Texas. This is in addition to the 11 locations across four states closed last week. On the public side, Gov. Greg Abbott of Texas, and Gov. Ron DeSantis of Florida have pledged to step up enforcement of social distancing rules, while Gov. Gavin Newsom has opined on the potential necessity of scaling back the reopening of businesses.

On the other side of that coin, a trio of states that have already scaled the mountain of viral spread and have slowly descended toward a much better place, New York, New Jersey and Connecticut (the former epicenter and its surrounding states), will now impose a 14-day quarantine on travelers coming in from states currently suffering from elevated rates of infection.

Bottom line? It all adds up to either a postponed, or reduced economic recovery. It means that Boston Fed Pres. Eric Rosengren was probably right to err on the side of caution in making his second-half economic projections.

The beatdown was real. The beatings were broad. All 11 sectors closed lower for the day. All but the most defensive of sectors closed multiple percentage points into the red. Almost all major equity indices are now lower over a rolling five-day period. All except the Nasdaq Composite, which is unchanged and the more focused Nasdaq 100, which has managed a small increase.

What were portfolio managers doing on Wednesday? Trading volume actually decreased day to day at the Nasdaq Market Site, as declining volume beat advancing volume by less than two to one. That shows me a lack of enthusiasm in profit-taking across tech or biotech.

However, the action was quite different across NYSE-listed names, where volume expanded significantly, where losers beat winners by more than seven to one, and declining volume beat advancing volume by more than 10 to 1. That's not encouraging for the Energy, Financial, Industrial or Material sectors. This kind of behavior, if not reversed foretells of a move back into a Covid shell type allocation and reduced confidence in the ability of the economy to move forward with reopening. 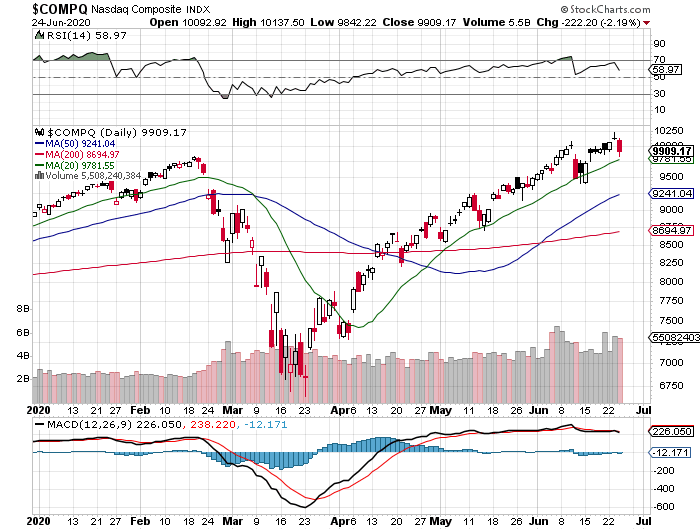 Watch the 20-day simple moving average (green line) for the Nasdaq Composite. This line has provided support to this index since early April, and is precisely where support was indeed provided on June 11. Yes, the line was pierced intraday later that week, but closed above the level on each occasion. This line was not threatened on Wednesday, but could come into play as headlines continue to roll in.

Anyone else notice this week's Investors Intelligence survey? The bulls are up to 57.3% from 54.9% last week. This is considered to be dangerous territory. Just a heads up for the new kids, but this is considered by most of us to be a contrarian indicator and anything greater than 55% usually foretells of a change in trend. A change that the S&P 500 is very close to signalling.

Largely, the immediate future remains under the control of virus-related statistics. It seems cold to reduce people to numbers but that is exactly what the algorithms that price the marketplace will do. The mortality rate of Covid-19 in the U.S. has not yet shown an increase. We know that this is a lagging indicator. With new cases, positive test result rates and hospitalizations on the rise across many states, it stands to reason that the most awful number of all will also increase, maybe three or four weeks behind. I hope not. What seems obvious to me is that the sharp rebound in economic activity (the "vee") has reached its upper bound. This is where the movement turns sideways at best, and retraces at worst.

We have believed that the Fed has the market's back for quite some time now. The central bank has certainly put a floor somewhere with just the actions already taken. Quality corporations accessing easy credit is huge. The pressure will now be on Congress to unleash more support from the Treasury. Not what any of us want, but what action other than pulling future growth forward in the form of large deficit spending can be done to bridge the gaps in cash flow that could now last far longer than previously hoped for?

Yes, everyone should have worn a mask and stayed away from each other. That horse has left the barn. The barn is burning, and will be costly to replace. That horse is lost and will be difficult to find.

Stress Test results for the Big Banks are due this afternoon. Just in case you thought this was all fun and games.

(Apple and McCormick are holdings in Jim Cramer's Action Alerts PLUS member club. Want to be alerted before Jim Cramer buys or sells these stocks? Learn more now.)

Get an email alert each time I write an article for Real Money. Click the "+Follow" next to my byline to this article.
TAGS: Earnings | Federal Reserve | Investing | Markets | Stocks | Trading | Coronavirus