Surprised? To be honest? A little. Not that there wasn't evidence of some dip buying related to Friday's decisive selloff across the U.S. equity space. One might have anticipated some of that. Some.

What I did find a bit surprising was two-fold. One, not the breadth but the broadness of the Monday rally was interesting. Then there was the late surge to the upside going into the closing bell. As if traders were afraid to miss something.

Was there a fear? Did "they" need to get in ahead of these "end of quarter" rebalancing by mandate estimates that have rattled more than a few traders up and down the Street?

My thought on this? The Monday rally, if the trend has turned in a southerly direction (which I have not confirmed for myself just yet), did nothing to reverse this.

The appearance of trajectory for the chart remains the same, as in a lower low, and a lower high for a fifth consecutive session. 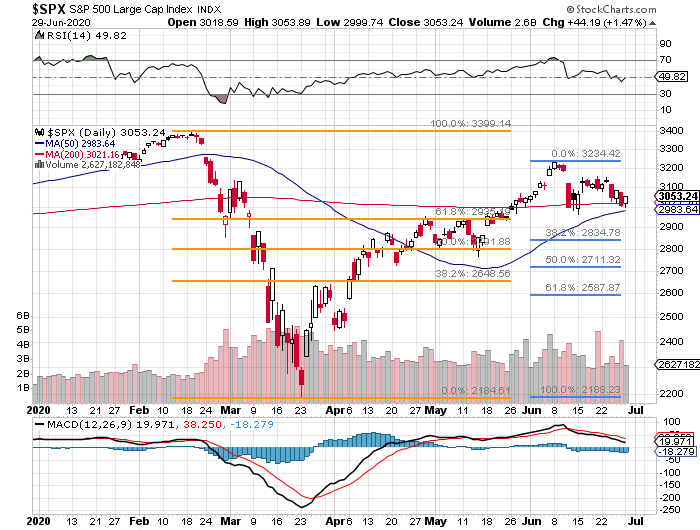 It all adds up to a less than convincing day of accumulation that has come amid a number of recent sessions that sent rather overt signals of overt distribution by professional managers.

So, does this recent past tell us all that much about the immediate future? If only it were that easy.

Tuesday will certainly be a day of heavier trading volume. End of month. End of quarter. We know this, as surely as we know that events such as as a Russell Rebalancing and/or a "quadruple witching expiration" act to increase volume. How key was it on Monday, given the lighter volume, that the S&P 500 was able to retake and hold not just the psychologically interesting 3000 level, but the technically significant 200-day simple moving average (3021) as well?

We think "they" (mandated pension/mutual funds) have to move somewhere between $35 billion and $75 billion worth of capital out of equities into debt securities. We expect the heaviest profit-taking to be done across those stocks comprising the Nasdaq 100, Nasdaq Composite, Russell 2000, and S&P 600. In other words, we think they are going to sell tech, biotech and small-caps as that is where the largest quarterly profits are.

We don't know what percentage of these portfolio managers have any level of discretion in the timing of this mandate, so as to get ahead of something everyone thinks they see at the same time. Surely some off this reallocation has already hit the tape.

Otherwise, the technical level (3021) would be far more important than anything else. Even should there be some early pressure on global markets given China's move to passing the much-mentioned national security law overnight that could draw out not just public protest in Hong Kong, but negative reaction from around the planet, holding that particular line could be what designs Tuesday's close.

There are managers that will decide whether to buy the dip should the 200-day SMA appear to be holding, and  those (the same people) that will sell on momentum if the dam should break. Some of this will be expressed as market volatility once exchanges start publishing market-on-close imbalance throughout the final hour of the regular session.

The difference could be stark in the complexion of the chart after the fact. Professional distribution (or accumulation) is contagious. Very few of these trader types are willing to go out on a limb all by themselves, and once they are cognizant that they are out of sync with capital flows in general, they will adjust. I cast no stones, I behave in the same way. Serving the old adage 'the trend is your friend" has kept more investors in this game than trying to swim upstream seeking the occasional home run ever could.

Don't you just love the game of chess? Or any game of strategy that results in either winning or losing based upon the skill of one player over the skill of another? Just where is Sarge going with this one? Glad you asked.

Not to downplay the positivity created around Monday's price discovery, but I see flaws in its development. The Dow Jones Industrials easily outperformed its peer large-cap indices. This came largely on Boeing's (BA) 14% move to the upside.

Boeing's 737 MAX aircraft finally began three days of certification testing on Monday running through a series of scripted scenarios for the FAA. The enthusiasm for Boeing resulted in some nice "pin action" to quote Jim Cramer.

Boeing's stock, thanks to the passive nature of investment in the year 2020, was able to drag both the airlines, as well as the entire defense/aerospace industry along with it. Does no one else see the man behind the curtain? For there is no wizard, he is just a man. Does a Goldman upgrade really warrant a 9.6% move to the upside for Southwest (LUV) ? I agree with Goldman that in this in this environment, it is the best U.S. carrier. Does not change the environment, though.

You all know how much I like both Lockheed Martin (LMT) and Raytheon (RTX) . That said, the entire planet is in a fiscal bind. That means that traditional U.S. allies will likely spend less on defense moving forward, and given a very uncertain national election come November, there is even a good chance the U.S. cuts back on defense.

Just the facts as I see them.

The Fed's most recent balance sheet statement shows just $8.7 billion in purchased corporate debt, both in the form of ETFs and the paper of individual issuers. Don't worry. There's room, this is a $750 billion program. That said, though, this is a close to a $10 trillion market.

Can the Fed really support this market to the degree that investors continue to support the market themselves? Good question.

Camp Lejeune. 1982. I was a kid, Fired an M72 LAW (Light Anti-Tank Weapon) rocket for the first time. Nailed it. Direct hit on some old rusty Sheridan tank that had been left on the range to rot, probably when I was a toddler.

My sergeant was standing behind me (yes wiseguy, off to the side).  He said,  "Nice shot. Don't ever try that on a Soviet tank. Won't make a dent, and they'll know where you are." Never forgot those words. The weapon, designed in the early 1960s was not appropriate for taking out T-62's or T-72's. Despite the name, it was a pea shooter more suitable for destroying smaller vehicles.

Understand your weapon. The Fed has not yet needed to get aggressive in this market. The weapon might be undersized for the mission at hand. We'll only know should that time come. Let's hope it does not. Cash flow will remain an issue for corporate America.

Before any of us even starts to think about Tuesday afternoon's MOC imbalances, both Fed Chair Jerome Powell and Treasury Secretary Steven Mnuchin will testify before the House Financial Services Committee. This will be the first in what will be a series of quarterly appearances that are mandated by the fiscal support package passed by Congress and signed by the president back in March.

In question will be both the current condition of the U.S. economy, as well as the state of the Fed's now nine emergency lending programs as well as the Treasury Department's ability to finance the government while playing backstop to several of these programs.

I think we all know that the economic recovery from the pandemic has, to this point, gone more smoothly, and moved more hastily than anyone had anticipated. That said, now Arizona becomes the latest U.S. state to at least partially reverse steps taken to reopen regional economies. In Arizona, gyms, movie theaters, and bars must now re-close. This comes after both Texas and Florida have also moved to roll back some reopenings in response to a worsening public health crisis.

The governors of California, Nevada, and North Carolina took at least the minimal step of requiring residents to wear something over their face when in public. Seems like the least people could do for one another. Meanwhile, other governors have inexplicably refused to do so. Trust me, you won't be fighting for your right to not wear a mask after someone you care about catches this awful virus. It's not like you get sick for a week or two and then you get better. Not even close. The worst flu is a walk in the park compared to this thing.

On that note, New Jersey Gov. Phil Murphy delayed the state's plan to allow indoor dining indefinitely. Word is that New York Gov. Andrew Cuomo is considering a similar action for New York City, which was set to resume such activity next week. That's the condition of your economy in a nutshell. Halfway back, or so.

Just like we told you in the beginning. Until there is a vaccine that people can trust, and until there are therapeutics that can make this a more normal illness for those who are symptomatic, the U.S. and global economies cannot think about reaching their potential.

Get an email alert each time I write an article for Real Money. Click the "+Follow" next to my byline to this article.
TAGS: Bonds | Federal Reserve | Investing | Markets | Stocks | Trading | Analyst Actions | U.S. Equity | Coronavirus