If it was only up to me, I would cut the cord tomorrow. My wife still likes cable. Given my druthers, once the slate of competitors come to market, I would make economic choices. None of the streaming services are that expensive by themselves, however, in aggregate, especially if one decides to keep cable, home entertainment suddenly becomes a monthly expense that does capture your attention.

I will admit that there are several shows available on Netflix (NFLX) that I will watch. The fact is, though, that I have never binged, and I really don't understand what folks could possibly find attractive by behaving in this way.

I like to be productive, or at least try to be. Maybe I'll watch a show solely intended for entertainment purposes if the day's work and daily physical exercise is done in time to still get several hours of sleep. I don't know.

One thing we do know about streaming entertainment as an industry is that it's competitive, and only going to get more crowded.

An industry dominated by Netflix is already making room for Amazon (AMZN) Prime, Hulu (controlled by Disney (DIS) , and CBS Corp. (CBS) ). On the way, in short order will be the likes of Apple (AAPL) TV+, Disney+, Comcast (CMCSA) , and HBO Max, operated by AT&T (T) .

What watchers of this industry are noticing is this competition is now forcing higher the cost of content, while forcing lower the price per month for consumers.

Last week, news broke that Netflix reportedly had agreed to pay north of $500 million for the rights to broadcast all 180 episodes of the popular 1990s sitcom "Seinfeld" starting in 2021.

But it's not like the show has been out of circulation. "Seinfeld" is currently available for viewing at Hulu, and will remain so through the end of 2020.

Why would Netflix do such a thing? Pressure. NBC Universal supposedly paid $500 million to take "The Office" away from Netflix and bring it home as the Comcast streaming service ramps up.

WarnerMedia paid $425 million (incredibly bidding more or less against itself) to bring "Friends," a very popular show on Netflix, home as HBO Max prepares to launch. To make matters worse, over the weekend, Viacom (VIAB) announced that they had landed cable syndication rights (think Comedy Central, TV Land, and the Paramount Network) to "Seinfeld," significantly diluting the perceived value of just what Netflix had paid for.

Meanwhile, Disney expects to charge a monthly fee of $6.99 for Disney+, or as much as $12.99 for a bundled package that will include that offering along with Hulu and ESPN+. (FYI, ESPN+ is the last streaming service that I would be willing to surrender.)

Then there is Apple TV+. CEO Tim Cook shocked the world when he announced that the new service would launch as soon as Nov. 1 for as little as $4.99 per month. Meanwhile, Amazon Prime membership offers a host of other services including discounts, music and free parcel delivery, and simply "throws in" much of the video streaming service.

Now think, what do all of these firms have that Netflix does not? Yes, you in the back. Good answer, that's right. They have huge businesses away from streaming entertainment that provide enormous cash flow, making them able to run this business at a loss for longer if need be. Netflix? Likely, in my opinion, to see compressed margins without such as cushion.

You'll recall the second-quarter number posted by Netflix on July 17. A $0.04 EPS beat on revenue that though +26% year over year was in line with expectations. The problem was that even though operating margin had indeed grown, subscriber growth had badly missed expectations.

A real positive takeaway from the balance sheet at that time was that for a company that must either purchase or produce all content (whereas much of the competition can rely on legacy content in order to fatten their libraries) that cash and cash equivalents had grown 28% to $5 billion. The negative takeaway was that total debt had also grown roughly 64% to $13.78 billion.

Netflix will report third-quarter performance in mid-October. Industry consensus is for EPS of $1.04 on revenue of $5.25 billion.

If realized, these numbers would be good for earnings growth of 17% on revenue growth of 31.3%, year over year. That would be excellent performance as Netflix has experienced earnings contraction in two of the past three quarters on revenue growth that had slowed to mid-20% from a 40% pace in mid-2018.

Keep in mind that the third quarter will be the final quarter reported for Netflix against a lesser slate of competitors for the full quarter. That makes subscriber growth for this quarter more of a focus than it ever has been. Remember, the company guided toward a 7 million number for such growth in July. They're going to need it, for that is the very last of the low-hanging fruit, in my opinion. 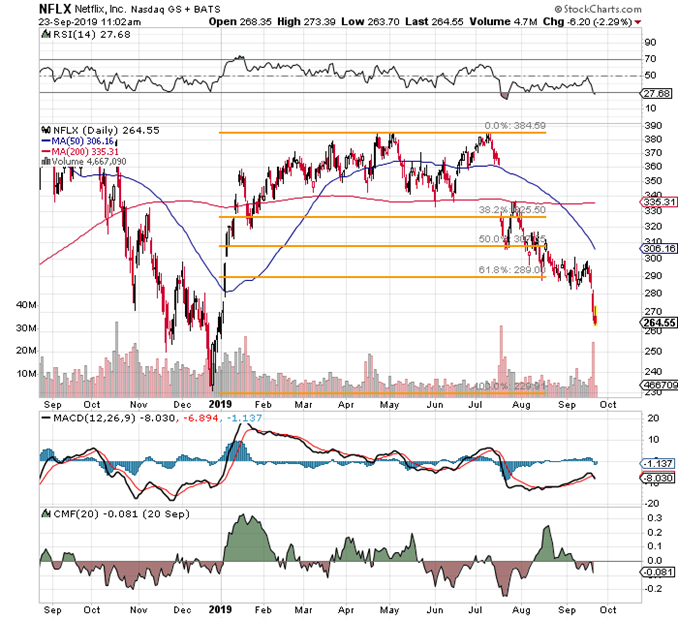 What I see here is name that took a beating on that second-quarter earnings release in July.

Food for the bears? The stock suffered a "death cross" in late August and simply broke after the Fibonacci level at $289 cracked.

Food for the bulls? The shares from the perspective of Relative Strength do appear oversold. Money Flow seems to back that up, as does a badly mangled daily Moving Average Convergence Divergence (MACD).

What to do with these shares?

Personally, I tend to keep my shorts on a much shorter (no pun intended) leash than my longs. As these shares approach $260, shorts will be looking at a 10% gain from the Fib break, and a 32.4% gain for anyone who actually picked the top. (I short this name on and off, and this tranche I am only short from the Fib level).

I think the shares can go to $250. That said, I don't expect to be short that long. I am more likely to take the money and go home, than to persist.

Why not buy back the short and pick a spot to go long? Nope. I'm good.

Get an email alert each time I write an article for Real Money. Click the "+Follow" next to my byline to this article.
TAGS: Short-selling | Investing | Markets | Stocks | Trading | Media | Movie Production | U.S. Equity