The selloff that really wasn't. Monday's regular trading session betrayed something, not sure exactly what. As markets bottomed more than two hours ahead of the closing bell, and then went into rally mode, the session became more and more difficult to interpret.

With the exception of our two small-cap indices (S&P 600 +0.15%, Russell 2000 +0.11%), every other measure of market performance that we might look at shaded red, though not very meaningfully. Only the Nasdaq 100 and the Dow Jones Transports gave up more than half of one percent. For the transports, the underperformance had more to do with weighty comments made by the Surface Transportation Board in connection to that jump ball known as Kansas City Southern (KSU) and the competing bids for the U.S. business already made by Canadian National Railway (CNI) and Canadian Pacific Railway (CP) .

I think Helene Meisler put it best in her Top Stocks newsletter opening last night. Helene bluntly said, "It was a pullback with very little selling."

The action really was elsewhere. WTI Crude led the commodity complex higher. Gold, silver, copper, natural gas, gasoline all heated up a bit on Monday. To a lesser degree, the grains participated as well, as the U.S. dollar showed weakness, in what is now a three-week old (and still going) pattern.

How much can one attribute the recent gains made by gold to the Tesla (TSLA) CEO Elon Musk-inspired pressure on bitcoin? Gold and bitcoin in terms of demographics, tend to attract investment from different age groups, however, the reasons for making those investments can be very similar indeed. I do believe that there could be, and probably is, some diversification across the spectrum of ex-money supply alternative-type investment as Musk scares bitcoin holders into taking profits.

Treasury securities out on the longer half of the yield curve, really from five-year notes on out to 30-year bonds all showed some weakness for the session.

Of course, with nearly every major equity index shaded red, market breadth would shade green. What did you expect, everything to be neat and tidy?

Winners did beat losers by a slim margin at both of New York's primary equity exchanges. Advancing volume beat declining volume considerably more decisively for names listed at both exchanges... by more than 2 to 1 at the NYSE, and by roughly 3 to 2 at the Nasdaq. Aggregate trading volume, though slightly higher for NYSE-listed names and slightly lower for Nasdaq-listed names, really moved sideways -- at Friday's extremely light levels.

In other words, the action is dwindling. Aggregate trading volume for names subordinate to the Nasdaq Composite have touched their own trading volume 50-day SMA (simple moving average) exactly once since March 19. That's two months.

I also want you to see this. The Nasdaq Composite experienced its second "Inside Day" in three sessions on Monday. As you know, Inside Days illustrate an environment indicative of reduced volatility. This has certainly been true, but Inside Days are also patterns of continuance.

You are looking at a very short, two-day rebound coming into Monday, that still left the index dangling out in the middle of nowhere. You also have what might just be a downturn that began with the April 29 apex, and appears to have been confirmed by increased volume on May the fourth (be with you).

The S&P 500 peaked later, on May 7, and supported by sectors more cyclical in their nomenclature, has not experienced the contraction, nor the "confirmation" of trend that we witness for the Composite.

Basically, whether this market is mired in a "down" trend, or is just currently moving through a "pressured" up trend is really left up to the perspective of the individual investor and how that investor is positioned.

As mentioned above, the U.S. dollar has been softening of late, That trend has continued overnight, pushing commodities as well as domestic equity index futures higher.

Fed Vice Chair Richard Clarida talked down the odds of the Fed leaning toward more hawkish monetary policy any time soon on Monday. The FOMC still has a month before "they" have to make an official statement.

What this did for the precious yellow metal was push paper gold above a key technical level. 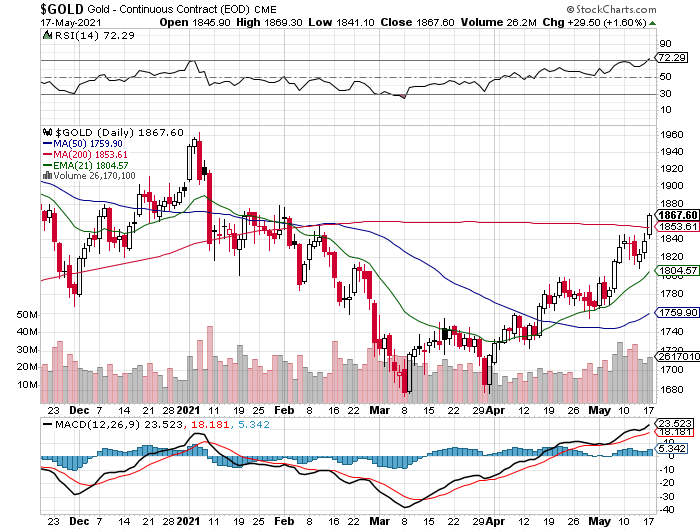 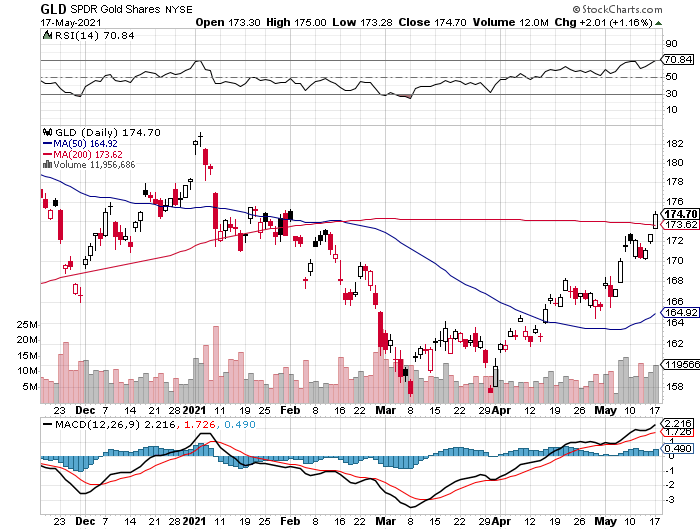 Readers will note that gold futures (continuous contract) and SPDR Gold Shares (GLD) have both crashed through potential resistance at their respective 200-day SMAs, rising to their highest prices since January turned into February. At the same time, a technically overbought condition exists as in both cases, Relative Strength has crossed the "70 threshold," and their daily MACDs have not suffered a bearish crossover since mid-March.

Could these technical signals cause some profit-taking? They could, but they won't if the dollar keeps wallowing, or if Elon keeps scaring folks out of cryptos.

The Best of Pals

Not a lot is being made of it, and I don't like to cover politics, but it appears that there are two stories making the rounds that might surprise given the divisive nature of the U.S. political environment over recent (or even not so recent) years. We know that there are differing perspectives depending on which side of the aisle one views the center from in regards to what is infrastructure, how large a coming infrastructure bill will be, and how much reliance should be placed upon increased taxes in order to pay for (at least a small portion of) that bill.

You all know that President Biden proposed $2.25 billion in spending in his American Jobs Plan, while Senate Republicans countered with a $568 billion proposal of their own. Just this < > far apart. What readers may or may not be up on, is that Senate minority (is it a minority if it's 50/50?) leader Mitch McConnell has been throwing around the idea of an $800 billion plan, while Senator Lindsey Graham (R-SC) has spoken of numbers as high as $900 billion.

Still miles apart? Maybe. That said, it's also an unspoken acknowledgement that there is a willingness to move at least on the right. We all know nobody makes their best bid or offer early or in public. This is an effort to get some movement from the left on this issue. This is also a short-term market positive.

In other news, members of both parties voted 86-11 to move ahead with a bill meant to pour $100 billion of investment into building up the U.S. effort in domestic science and technology (make more semiconductors here) in order to to better compete with China on the global stage, and defend against what both parties see as ongoing theft of American ingenuity by the Chinese Communist Party. The bill is co-sponsored by Senators Todd Young (R-IN) and Majority Leader Chuck Schumer (D-NY).

Get an email alert each time I write an article for Real Money. Click the "+Follow" next to my byline to this article.
TAGS: Currencies | Earnings | Futures | Gold | Indexes | Investing | Markets | Politics | Small Cap | Stocks | Trading | U.S. Equity