By TIMOTHY COLLINS Nov 24, 2020 | 02:10 PM EST
Stocks quotes in this article: CIIC, UPS, NKLA
Shares of CIIG Merger Corp ( CIIC)  have enjoyed a wild ride over the past week. The special purpose acquisition company, or SPAC, announced it would be buying electric vehicle company Arrival. Shares soared from the $10 level back on Nov. 15 to as high as $33.50 on Tuesday. Currently, they still sit with a gain of 185% over the past week. Not too shabby.
CIIG Merger Corp. ( CIIC) Warrants (CIICW) on the other hand have gone from below $1 on Nov. 15 to $6.55 during the same time frame. They touched $8.50 at one point. And yet, people are still disappointed in the warrant performance.
Let's step back for a second. Why the excitement around Arrival?
The deal isn't even expected to close until sometime in early 2021, and the company's vehicle won't hit the mass market until 2023, with production starting late next year. The reason folks are excited is because Arrival already has $1.2 billion in orders from UPS ( UPS) , with the potential for UPS to exercise and option to double the unit count. In 2021, it's expected to start its electric bus production, followed by electric vans in 2022 and small vehicles in 2023. Add in a 100 million Euro backing from Hyundai (HYMTF), who seems to have ventures all over the place, and Kia, and I get the reason for the excitement.
That said, the merger valuation has gone from $5.4 billion to almost $18 billion in a week's time. Touching on market cap is another issue, but let's talk about the warrant disappointment. With a holder of the warrants able to purchase shares at $11.50, folks are wondering why the warrants are trading around $6.50, with the stock at $28.50. After all, $28.50 minus $11.50 equals $17. The current price of $6.50 is a far cry from $17. I keep seeing notes on Twitter and Reddit that the warrants are a sure thing to fly higher.
You know what they say about "sure things" in the market. OK, so maybe there isn't a saying, but nothing about the market involves certainty.
Initially, many, including myself, operating under the notion that these warrants traded at a discount because virtually every SPAC carries the provision that if the stock is trading above $18, then the company can force a cashless conversion. Even the CEO from Nikola ( NKLA)  said as much to me in a phone conversation before the company closed its merger.
I was wrong back then. He was wrong, too.
Since the conversions can't be forced until after the merger is closed and with some 30 days' notice, the risk of that happening is virtually zero. No company would be crazy enough to do it, anyhow. Most are betting off filing for registration and letting the warrants get exercised. That ties into why a huge discount can and does exist.
The warrants can't be exercised, nor hedged, currently. Without the ability to exercise the warrants, they trade like European options. The intrinsic value doesn't matter, until there is the potential for liquidity. With the merger some four to five months away from closing, there's a big potential the move in CIIC is simple momentum and fear of missing out. As we've seen with so many other SPACs, there's a high likelihood the price will come back to Earth. If the shares retrace even to the $20 market, the discount of the warrants is no longer as large. 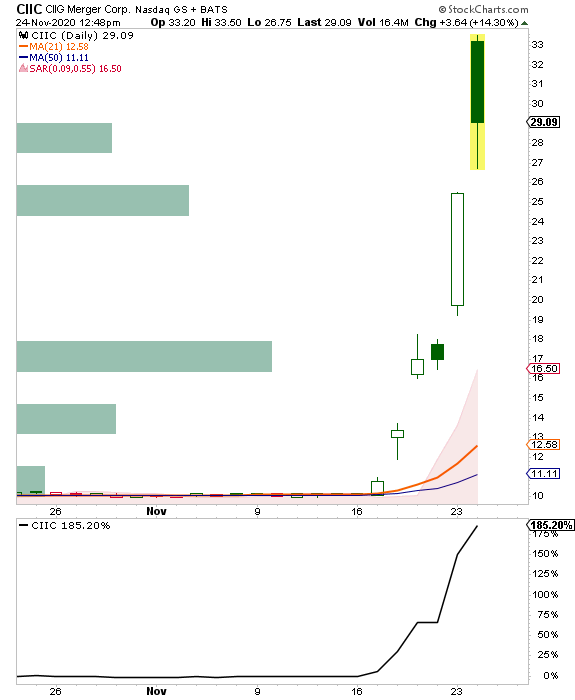 Furthermore, once the stock has options available, we'll see some hedging take place, but with an implied volatility that will likely be in the $150 to $250 range, the cost to hedge is going to be huge. Don't be shocked to see a Feb. 19, 2021, $25 put trading for $8 to $9. The premium on a put into February or March expiration is going to be priced very similar to the discount on the warrant.
Lack of hedging options and the inability to capture the intrinsic value risk-free is why we have a warrant trading at a large discount. And the discount will remain, while those do not exist. Furthermore, when we do have options, the discount will become roughly equal to the cost of a put hedge into the expected merger closing.
In short, don't expect the discount to shrink any time soon. 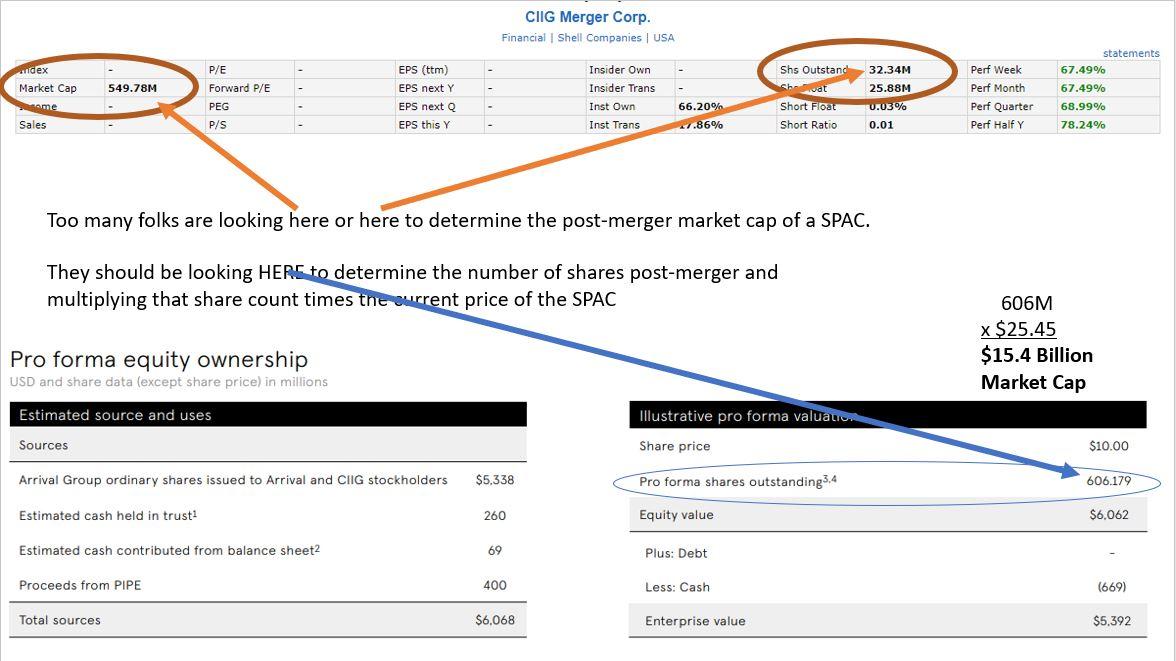 One last thing, here is a graphic on how to determine the projected market cap of the company coming public. I see too many folks referencing the outstanding share count of the SPAC. That will significantly understate the market cap. We need to use the projected outstanding shares post-merger.
Get an email alert each time I write an article for Real Money. Click the "+Follow" next to my byline to this article.
TAGS: Mergers and Acquisitions | Investing | Options | Stocks | Automotive | Electric Vehicles