Logitech International (LOGI) was the focus of the second caller's question. Cramer said he'd take some profits in this computer peripherals maker with the shares having tripled in recent months.

When we reviewed the charts of LOGI back on Jan. 20 we wrote that "A stock that declines in the face of what appears to be bullish news tells us that investors are looking ahead to weaker fundamentals. Our Point and Figure chart suggests risk down to the $88 area. Avoid the long side for now."

Prices got close to our Point and Figure target of $88 by early March and have rebounded.

Let's pay another visit to the technicals.

In the updated daily bar chart of LOGI, below, we can see that the shares made a deeper move below the rising 50-day moving average line than in two previous declines in September and November. The On-Balance-Volume (OBV) line made a decline from February into early March followed by a limited rise into April. Buyers are only being slightly more aggressive.

The Moving Average Convergence Divergence (MACD) oscillator has just edged slightly back above the zero line for an outright buy signal.

In the weekly bar chart of LOGI, below, we see a mixed picture. The shares are still in a longer-term uptrend above the rising 40-week moving average line.

The trading volume has declined the past five weeks as prices have recovered. The OBV line shows a recovery back to its February high. The MACD oscillator is pointed down but has begun to narrow.

In this daily Point and Figure chart of LOGI, below, we can see that the software is projecting the very nearby price target of only $112 for LOGI. Maybe technically oriented traders will be encouraged to sell? 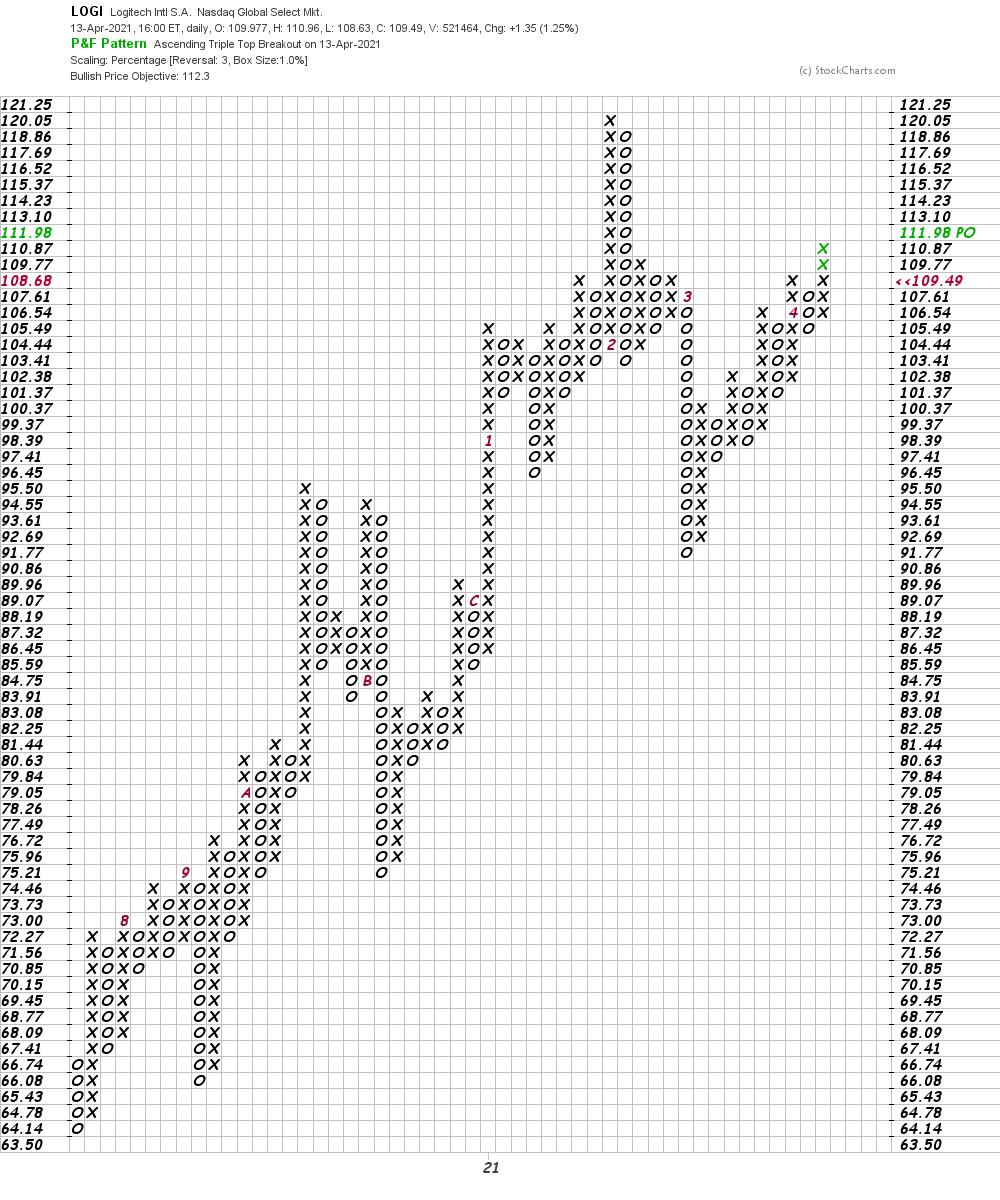 In this weekly Point and Figure chart of LOGI, below, we see a much different price target than in our Jan. 20 review. Here the chart shows a downside target of $63.

Bottom-line strategy: Interesting. Jim Cramer is recommending taking some profits on LOGI and the daily Point and Figure chart is only showing a $112 price target and now the weekly chart is showing a downside price target.

Get an email alert each time I write an article for Real Money. Click the "+Follow" next to my byline to this article.
TAGS: Investing | Stocks | Technical Analysis | Technology | Technology Hardware & Equipment | Mad Money