We are a bit more encouraged about the market's near-term potential as the major index charts saw a couple of positive technical events Thursday.

The major equity indices closed mixed Thursday with negative internals on the NYSE and Nasdaq as trading volumes dropped.

On the plus side, the S&P 500, DJIA, Nasdaq Composite and Nasdaq 100 closed higher on the day with the Composite managing to close above resistance, turning its near-term trend to bullish from neutral.

The Nasdaq 100 (see below) closed above resistance as well and posted a new all-time closing high. The rest of the indices declined.

So, we now find the near-term trends bullish on the Nasdaq Composite and Nasdaq 100, neutral for the S&P, DJIA, MidCap 400 and Value Line Arithmetic Index and bearish for the Dow Jones Transports and Russell 2000. 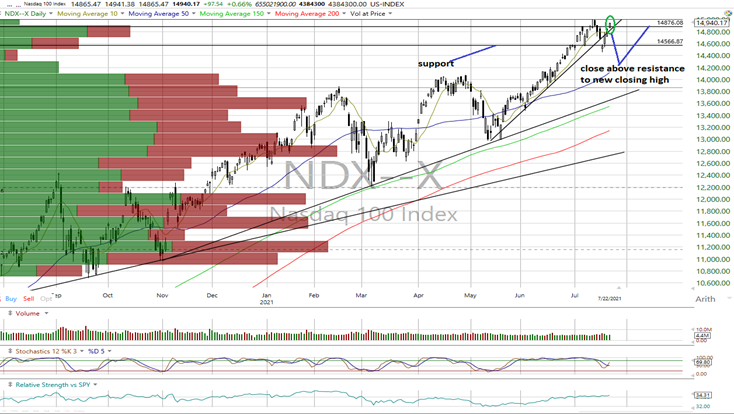 Market breadth remains neutral for the All Exchange, NYSE and Nasdaq cumulative advance/decline lines. In our opinion, this continues to speak to the selectivity in the markets as previously discussed.

The McClellan 1-Day Overbought/Oversold oscillators are mostly neutral except for the NYSE that moved back into mildly oversold territory (All Exchange: -37.97 NYSE: -51.19 Nasdaq: -27.88). In our opinion, they do not present a threat at these levels.

However, the psychology data remains a concern. The Rydex Ratio (contrarian indicator), measuring the action of the leveraged ETF traders, remains bearish at 1.17 as they remain leveraged long.

This week's contrarian AAII bear/bull ratio (24.5/41.67) remained in mildly bearish territory while the Investors Intelligence Bear/Bull Ratio (contrary indicator) continued to suggest an excess of bullish expectations on the part of investment advisors at a bearish 15.3/61.2. The lack of fear generated by Monday's slide still implies too much bullish optimism remains present, in our opinion.

The Open Insider Buy/Sell Ratio did see an uptick to a neutral 32.4. Insiders have been a bit more active on the buy side but not what we would consider impressive.

The 10-year Treasury yield closed at 1.27% and near 1.3% resistance. We view support to be 1.13%. We are monitoring the yield for a possible violation of said resistance.

The market route that occurred at the beginning of the week appears to be largely behind us. And while we are a bit more encouraged in our expectations, we are keeping our near-term macro-outlook for equities at "neutral" for now.