Oracle Corp. (ORCL) is due to report its latest earnings figures on Tuesday, which was pointed out in Jim Cramer's game plan for this week during Friday's Mad Money program. Let's visit with the charts and indicators today to see if there are any clues about how traders are positioned.

In the daily bar chart of ORCL, below, we can see that prices have largely been in a sideways trading range between $52 and $56 for much of the past 12 months. I am not ignoring the February-March decline from $56 to $40 but the view from 35,000 feet is sideways. ORCL crosses the 50-day moving average line and the 200-day moving average line many times.

While trading volume looks like it triples in March, notice that the On-Balance-Volume (OBV) line makes only a shallow decline from February into March telling us that investors largely stayed with their long positions. The OBV line has since made a new high for the move up and could be foreshadowing new price highs in the weeks ahead.

The trend-following Moving Average Convergence Divergence (MACD) oscillator has been weakening since the middle of April. It has not broken below the zero line for an outright sell signal but it is getting very close and tells us that the trend has been weakening.

In the weekly bar chart of ORCL, below, we can see a weakening picture. Prices ended last week below the 40-week moving average line after making an "outside week and lower close" bar -- last week broke the high and the low of the prior week before closing lower. Futures traders have been known to consider this kind of price action as a bearish reversal.
The weekly OBV line has been in a decline since October and in this time frame confirms the price weakness from last July. The MACD oscillator has been in a decline from last July and is below the zero line.

In this daily Point and Figure chart of ORCL, below, we can see a potential upside price target in the $65 area and a weekly chart (not shown) has a $70 price target. If there is a pullback this chart shows support should appear beginning around $47. 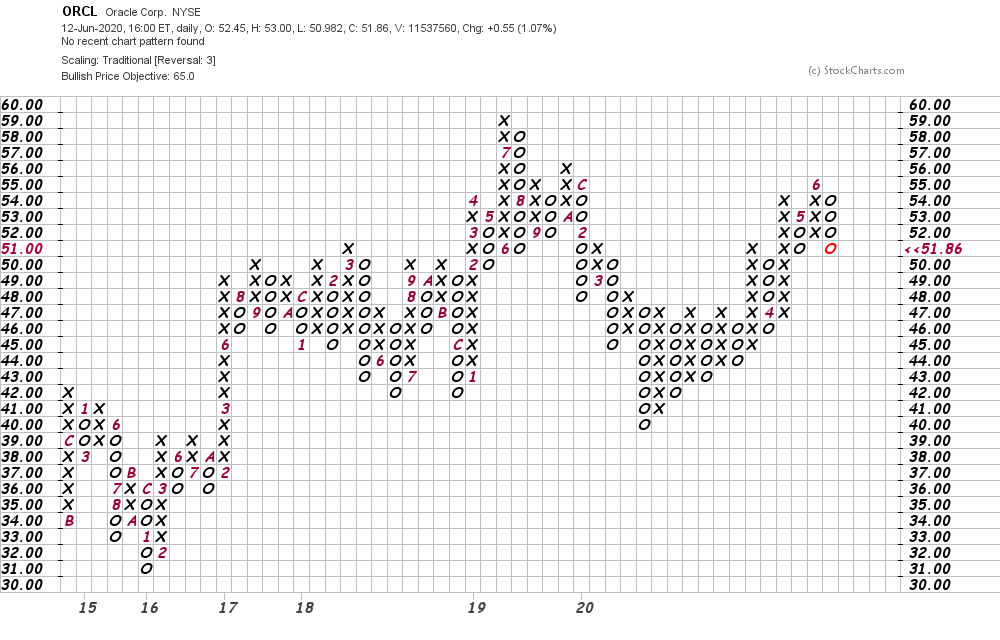 Bottom-line strategy: ORCL finished last week below the $52 lower band noted above. I have no special knowledge of their earnings figures but the stock appears to be getting dragged down by the weakness in the broader market. If volume does not expand on weakness we might only get a dip to $48 and that might turn out to be a buying opportunity for renewed gains in the latter half of the year.
Get an email alert each time I write an article for Real Money. Click the "+Follow" next to my byline to this article.
TAGS: Investing | Stocks | Technical Analysis | Software & Services | Technology | Mad Money | Earnings Preview