By STEPHEN GUILFOYLE Apr 01, 2020 | 12:18 PM EDT
Stocks quotes in this article: KR, CAG, KHC, CPB, AMZN, COST, SYY, BRK.A, BRK.B
It was not even a month ago. Seems longer than that. March 5: Kroger ( KR) , a name that I have traded in the past, but not recently, reported the firm's fiscal fourth quarter performance. Kroger did manage to post adjusted earnings per share that just edged expectations.
Sales printed in line with consensus, sporting year-over-year growth of 2.1%. Digital sales had grown 22%, which pushed gross margin slightly above what Wall Street had been looking for. Guidance was re-affirmed. The stock rallied, buoyed by what looked like consistent performance that could extend forward. The period covered ended Feb. 1. Might as well have been 100 years ago.
I wrote to you yesterday about the empty grocery shelves that I saw about a month ago. That was when I moved into such "lackluster" names as ConAgra ( CAG) , and Kraft Heinz ( KHC) . ConAgra has been a positive. Kraft has not. I still look at Campbell Soup ( CPB) without entering, having missed my price last week, and being stubbornly Irish. I thought about those who sell groceries at the retail level. I thought about Kroger that day, and I also thought about Amazon ( AMZN)  and Costco ( COST) . I stuck with both Amazon, and Costco as I was already in those names, and I liked the aggression shown by both in the face of a troubled environment.

The firm announced on Wednesday morning it would stand by prior earnings guidance of $2.30 to $2.40 per share for the entire year, which at the high end would be growth of 10%. The tone was cautious, though. The firm acknowledged that sales growth for the first quarter ending on April 30 would run hotter than the 2.25% sales growth for the full year that the firm had previously pointed toward. Kroger expects that throughout this year sales will likely remain volatile as will evolving consumer behavior through this changed environment.
Even with these improved sales, there has been strain. The firm states that activity accelerated sharply mid-month, with identical sales rising as much as 30%, and then tapering a bit, but not falling to previous levels. To tackle the increased pressure, the firm has struck a deal with Sysco ( SYY) to temporarily take on associated furloughs by that firm in Kroger's distribution centers. Kroger has paused at least for now, the firm's share repurchase program, and borrowed $1 billion from an existing credit facility as the firm announced that all hourly employees working front-line grocery, or in the firm's supply chain, pharmacy, or call centers would see a $2 per hour raise for the period covering March 29 through April 18. This came on top of the announced intention to add 2,000 positions two weeks earlier.
I am hesitant to add Kroger to my portfolio, as I already like where I am in terms of breadth and allocation. That said, its hard to forget that back in mid-February, as pitchers and catchers were reporting to spring training sites throughout Florida and Arizona, that Berkshire Hathaway ( BRK.A) , ( BRK.B)  had taken a stake in this name.

What I Am Wondering

What I am left wondering is this. See that basing pattern that ran from November through February? 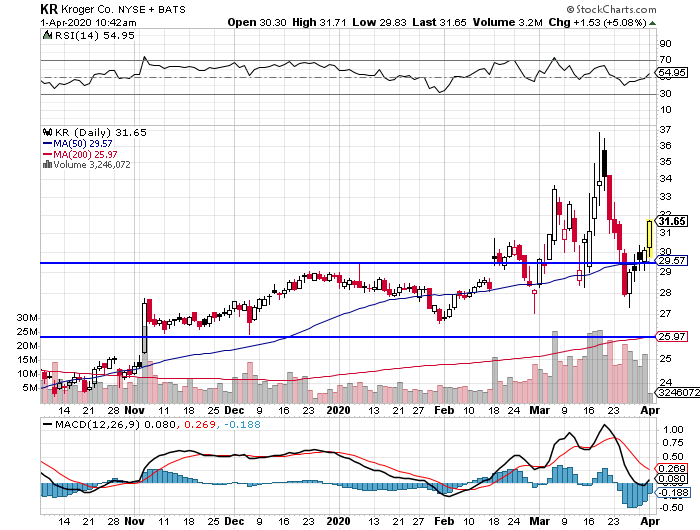 The name already had the breakout that was created by that setup. Is this "pop" still part of that breakout? If it is, then at least technically, there is no reason that this name can not make another run at the mid-March highs close to $37. I mean, I'm not going to buy Kroger on a day that the name is up 5%. Moving forward, however, the current quarter that ends on April 20, will be reported on June 16.

I see two paths that traders and investors might follow to get upward exposure to Kroger if interested.
1) Traders could purchase 100 shares at, or close to, the last sale of $31.72. I would wait, however, and write one KR June 19, $36 call against that position to reduce net basis to $30.72. If the shares are called away in June, the trader runs with a net profit of 17.2%.
2) Traders not really willing to expose themselves to much capital risk in this environment could purchase one KR June 19 $32 call for a rough $2.40, and sell that same KR June 19 $36 call mentioned above for around a buck. The net debit here would be $1.40, but that would also be the entirety of the risk. Such a strategy is known as a bull call spread, and if the whole trade works, the trader stands to pocket a cool $3.60.
(AMZN and COST are holdings in Jim Cramer's Action Alerts PLUS Charitable Trust Portfolio. Want to be alerted before Cramer buys or sells them? Learn more now.)
Get an email alert each time I write an article for Real Money. Click the "+Follow" next to my byline to this article.
TAGS: Investing | Stocks | Food & Staples Retail | Food & Drink | Retail | Transportation