The FAANG stocks have led the market higher and they're going to continue to lead us higher, Jim Cramer tells Real Money readers. While some money managers are advocating to rotate into the oils and the cyclical stocks, Cramer said he's sticking with the winners.

Shares of Apple may seem overvalued trading at 30 times earnings, but with a falling U.S. dollar, Apple's overseas earnings are going to translate into huge profits Cramer notes.

Let's check out the charts of AAPL.

In this daily Japanese candlestick chart of AAPL, below, we can see that prices have trended sideways the past three months. The trend of the On-Balance-Volume (OBV) line has been flat the past three months suggesting that buyers and sellers of AAPL are roughly in balance. The Moving Average Convergence Divergence (MACD) oscillator has been hugging the zero line but has recently inched slightly higher.

In this weekly Japanese candlestick chart of AAPL, below, we can see how prices have traded sideways after its big rally from the March low. Prices look like they have made a large triangle pattern. The weekly OBV line has stalled the past four months and the MACD oscillator is in a take profits sell mode.

In this daily Point and Figure chart of AAPL, below, we get another perspective on the triangle pattern. It looks like there is more price activity in the lower half of this pattern and that would be bullish as it would suggest more buying of weakness than selling of strength. A trade at $126.18 may be needed to refresh the uptrend and precipitate a breakout from the triangle. 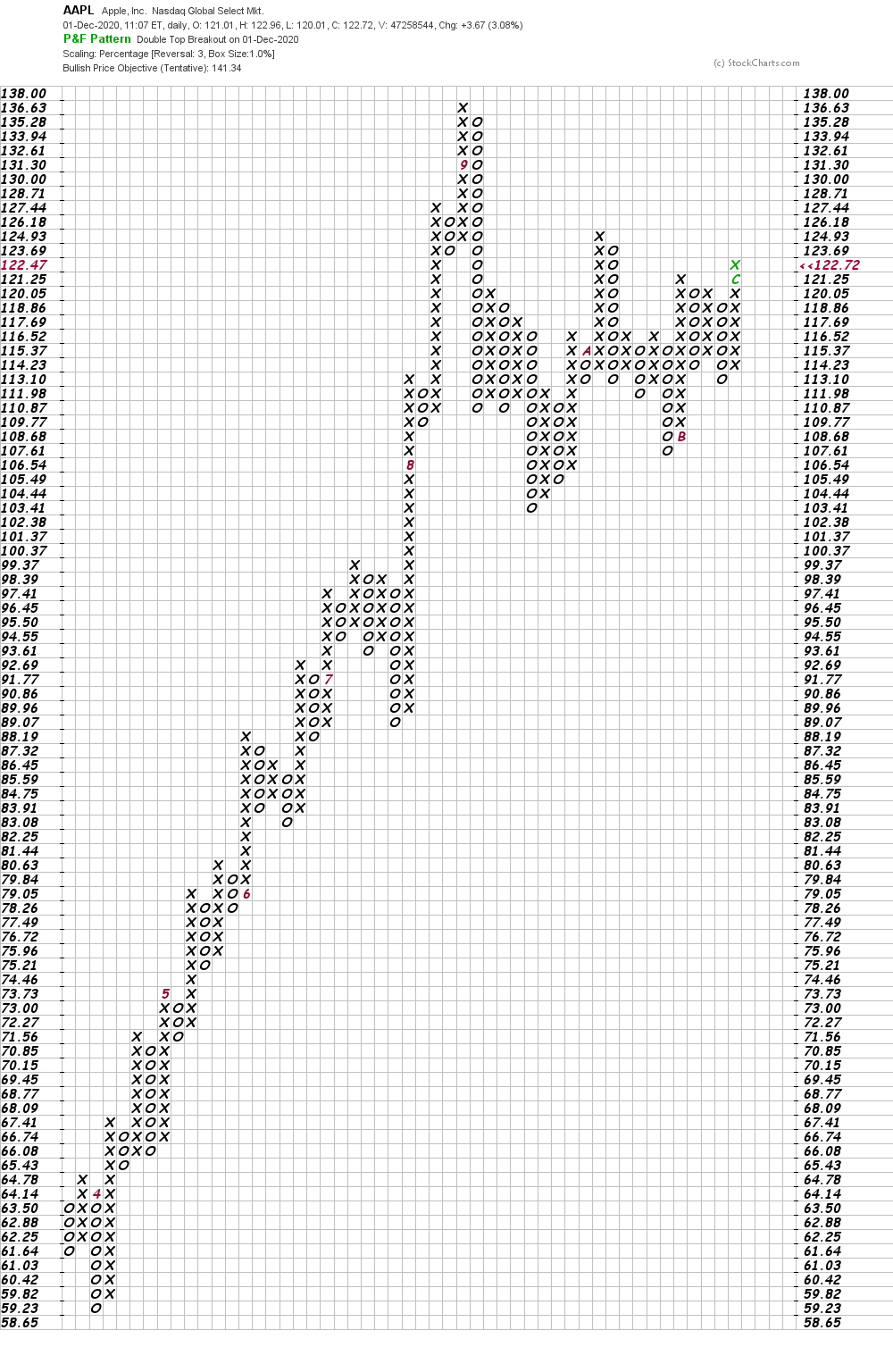 Bottom-line strategy: Apple is an important company and a leadership stock. It is widely followed by a team of experienced analysts pouring over the fundamentals giving technical analysis an "edge" in the equation. AAPL should eventually make an upside breakout but in the meantime you will probably have to endure more sideways movement.

(Apple, Amazon, Facebook and Google are holdings in Jim Cramer's Action Alerts PLUS member club. Want to be alerted before Jim Cramer buys or sells these stocks? Learn more now.)

Get an email alert each time I write an article for Real Money. Click the "+Follow" next to my byline to this article.
TAGS: Investing | Stocks | Technical Analysis | Fintech | Technology | Television Production/Distribution | E-Commerce | Mad Money | Telecom Services