Were folks caught off sides on this rally? That's what we always hear when the market rallies, as it has, but unless you have firm data, how can you really know?

What I do know is that Wednesday was another either/or day in the market as mega-cap tech and the stocks that had been ramping until last week pretty much sat out the rally, while the down-and- outers had their chance to lift themselves up from the depths.

As we know, it took over a month for the then down-and-out tech stocks in May to become the only game in town. It took about the same time for the economically sensitive stocks to come down and become pariahs. Naturally the rally feels like shorts are running for cover as the down-and-outs rally.

Again I have no data to suggest that, but I am reminded of something Bob Prechter, the original Elliott Wave analyst, once said. He said all rallies begin with short covering. He is not wrong.

Despite the good breadth these last two trading days, none of the indicators have really changed in terms of the breadth indicators. By that, I mean none have turned upward enough to see them. The Volume Indicator did get to 44% on Monday, thus it managed to get to the top of the oversold zone. As noted on Monday, the oversold zone is upper 30s/low 40s.

You can see the Overbought/Oversold Oscillators have moved up, but not significantly. If the market doesn't die and turn south in a big way on Thursday, which not my expectation, the Oscillators should at least cross back over the zero-line by Friday.

On the sentiment front, I am quite surprised that the put/call ratio was at .87 on Wednesday. Usually we see folks jump right on the bandwagon and this time they have not. Perhaps because their newest holdings -- mega-cap tech -- did not participate.

Finally the Investors Intelligence bulls did come down to 53%, which is the lowest since late May and a nine point drop from last week. So, while we could hear it in the conversations folks were having about the market earlier in the week, we now have a statistic that tells us exactly how much the sentiment shifted. 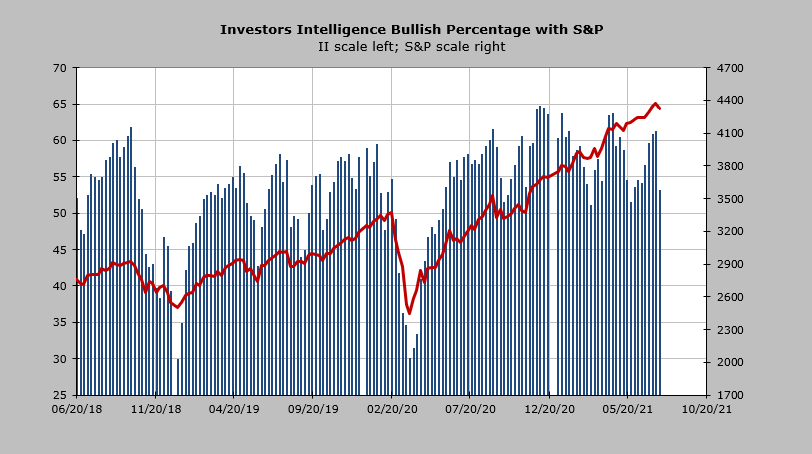 I know everyone is talking about energy and banks the last two days, but let's talk about the transports, because they saw their first consecutive up days in July. For now the pattern of lower lows and lower highs is intact, but if this line can be crossed, doesn't that change the pattern for the downtrend this group has been in for the last two months?

I still think we can get some choppy/give back days, but then we'd rally again as the market works its way to an overbought condition again.