One Whale of a Rally

Traders were quick to cast blame for last Thursday's selloff and for the volatile session that followed on Friday. Was it Dr. Anthony Fauci casting doubt on a vaccine for Covid-19 finding its way toward some kind of "Emergency Use Authorization" as soon as what has been hoped for in a best-case scenario? Was it simply a continuous inability of two competing sides in our nation's capital to reach an agreement on a next-phase fiscal support package less than two months ahead of the election? Did a surprisingly strong month of August for labor markets make any legislative compromise even more difficult to reach?

It had to be something. Something had to cause a turn into the wind for the entire fleet. Something had to turn the tide against the high-flying mega-cap tech stocks that had always been deemed "growth" stocks, but of late, at elevated valuations, had also in a bizarre way taken on an almost defensive role.

The Nasdaq Composite gave up 3.3% for the five-day week ahead of Labor Day. That same Composite really surrendered a rough 6% over just Thursday and Friday, and that after making at least a head fake toward its own 50-day simple moving average (SMA) earlier in the day on Friday. You may recall last Thursday's Market Recon. In that piece, we wrote that the Nasdaq Composite could withstand a correction of 10.4% and still hold that 50 day line. That line is now 10,858. The index? Closed on Friday at 11,313, but bottomed out at 10,875. 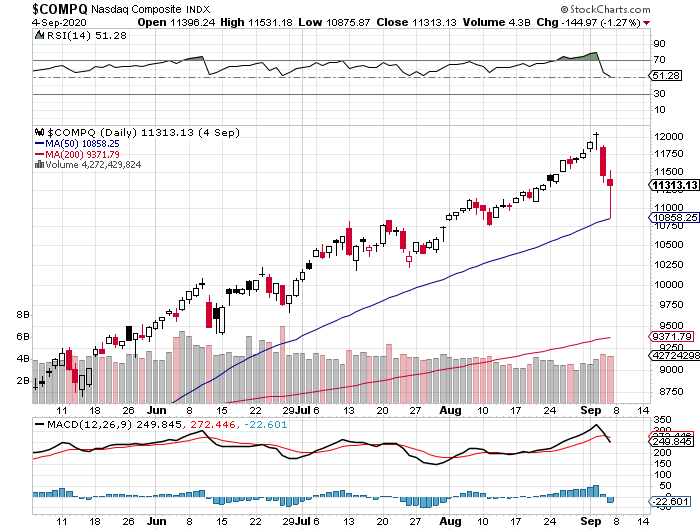 Yes, it was that close. Are we (markets) out of the woods? We may open below that level here on Tuesday. Many blame none of the above-mentioned fallback reasons for the market's sudden reintroduction to volatility. Many have been talking about a whale of options activity as a catalyst to this activity. Japan's Softbank has been mentioned, among others. Real purchasing of options in size not only creates an algorithmic trail of activity in its wake, but the activity also forces those broker-dealers that may have sold these options (in this case, calls) to hedge their positions through actually purchasing the equity. This exacerbates the entire move. Then, once the whale turns, the move to the downside must be unwound as quickly as possible as algorithms again take the lead, with traders who may have gotten involved in the upside chase using margin (borrowed money) being forced out of their positions. It doesn't take long to get ugly.

How large is this trade in total? This, we just do not know.

There are ideas. We do know that options trading volume for has been well above norms this summer over recent years for U.S. stocks broadly, and we know that much of this has been focused upon some of the biggest-cap tech types, such as Apple (AAPL) , Microsoft (MSFT) , Alphabet (GOOGL) and Facebook (FB) . Just conjecture, but the wildly intense price discovery witnessed in stocks such as Tesla TSLA and Zoom Video ZM looks to have been driven by something more than demand and supply.

FYI, shares of Softbank fell more than 7% on Monday in Tokyo, pulling the entire Nikkei 225 into the red for that session. Reports did roll in around midday on Monday that Softbank was already out of the majority of its public equity exposure. The truth is that shares of Softbank have continued to struggle on Tuesday, and we don't know just what that means, nor where this exposure is. We also don't know how broad this activity was, or even is, beyond just the one firm that has been identified in the financial media.

OK, so a five-week winning streak comes to an end. Materials and Utilities were the only two sectors of 11 to post gains for the week. Financials and Staples came very close to treading water. At the bottom -- well, almost, as Energy still finished in 11th -- was Information Technology, led lower by Software, and Communications Services, led lower by the Internet. It may be noteworthy that Transports outperformed broader market averages, but that smaller-caps did not. Trading volume was elevated toward the end of the week.

What does this mean? What does it mean that Materials, Financials and Staples hang in there with Utilities (while yields rise. mind you) and Transports? Well, without the small to mid-caps, it's not about growth, though we do like the decreasing unemployment rate on increased participation. Inflation could have an impact here in spots, but probably not yet, and we will know more about that later this week.

This is a good, old-fashioned rotation, but not for the right reasons. Equity investors have decided for now that while there has been a chase for gamma in names most heavily traded on the options side, that there is a perception of safety in the kinds of names with options that have drawn less interest, thus producing premiums more in line with their particular history.

Is this "THE Rotation" or just one of many attempted "temporary" rotations? If I knew that you'd never hear from me again. It's easy to see the reason for a less euphoric atmosphere around mega-cap tech. This sort of trading behavior will not be imitated, or at least not so identifiably any time soon. So, this is not opportunity? Perhaps, longer term, I think it is. I bought Apple and Tesla small on Thursday and added to both, still small, on Friday. I added to Nvidia (NVDA) small on Friday as well.

Run over? Surprisingly, not yet, but there is time. Tesla is in the news here on Tuesday morning after diluting the equity. That one could hurt. Beyond that, Nasdaq futures were trading significantly lower through the overnight session ahead of Tuesday's regular session. This may be a work in progress. Still, are these not names that I would rather be in, even if it ends up being hard work? It was never supposed to be as easy as it has been. We all know that.

The larger questions linger and three unknowns keep pawing at me.

Where are yields going? Treasuries with longer maturities acted as safe haven on Thursday, then sold off with equities on Friday. This morning, there appears to be renewed demand. Higher-yielding debt securities will offer competition for investment capital while slowing down the corporate reach for cheap credit.

What about breadth? We all thought it felt wrong as the major large-cap equity indices moved north on narrowed breadth. Heck, just a few names made up more than 25% of aggregate directional impact upon the S&P 500. The bull market kept on moving in a northerly direction even on days that most stocks did not. Do we see this in reverse? Until the mega-caps become less "mega,", will we see down days at the headline level, while market breadth bears absolutely positive-looking data? It's worth thinking about. That's why I am close, but not calling for an end to what has been a confirmed uptrend for equities since late March.

It should not take very long to figure out if this whale is really a giant squid, and if it's the latter, just how long are the tentacles? That leaves corporate earnings and my final question, namely, just where are earnings headed? This is reliant upon the underlying economy, both monetary and fiscal policy, the virus itself and human reaction to all of the above.

The third quarter began on the calendar more than a month ago for most firms. The reporting period for the quarter still is roughly five weeks or so in the future. JPMorgan Chase (JPM) and Citigroup (C) will bat leadoff for the major money center banks prior to the opening bell on Oct. 13, which is a Tuesday. You'll recall that across the S&P 500, second-quarter earnings actually beat very low expectations quite easily. For the second quarter, S&P 500 earnings contracted significantly at -31.7%, versus expectations for -44% as recently as late June. Revenues hit the tape at -9.3% measured against consensus of -11%.

As longtime readers know, I rely upon FactSet more than anyone else for aggregate earnings-related data, and that holds true. FactSet is my source for these numbers. About 84% of the S&P 500 beat second-quarter expectations for earnings, while 65% also beat on the revenue side.

Just so you know where we stand in early September, for the third quarter, the 'Earnings Insight" release at FactSet currently shows expectations for third-quarter earnings "growth" of -22.4%, which has improved over this past reporting season. All 11 sectors are expected to post negative earnings growth for the third quarter, which would be worse than the second quarter when three sectors (Utilities, Health Care and Information Technology) actually did show year-over-year growth. As for revenue, the expectation for the third quarter is for -4.1%, with five of the 11 sectors actually sporting positive growth.

As the legendary Art Cashin of both UBS and NYSE fame often says, "Stay nimble my friends." Well, I have always listened to Arthur, and I have always tried to stray nimble -- well, if not always, at least ever since CMGI.

Easier said than done, you say? Not true, says I. Price targets and panic points on everything. If it moves, you know what you plan to do, be it good or bad. Respecting this small bit of discipline almost always prevents disaster, even if also capping victories.

That said, by understanding how to manipulate one's own levels ahead of having to think while under a state of increased stress almost always allows for a flexible cash position, meaning one does not need to liquidate in order to invest. On top of that, know what a trade is as opposed to an investment. There is far more tolerance for net basis management for an investment. Turning an investment into a trade can be a mistake, but who cares? Never turn a trade into an investment. That's how folks get really hurt.

Get an email alert each time I write an article for Real Money. Click the "+Follow" next to my byline to this article.
TAGS: Investing | Stocks | Real Money | Earnings Preview