During his "Mad Money" program Monday Jim Cramer said the rally in the cloud kings must be considered suspect and be evaluated on a case-by-case basis.  Cramer preferred the data center hardware stocks, such as Western Digital Corp, (WDC) , as an alternate investment.

Let's check out the charts of WDC here on Tuesday morning.
In this daily bar chart of Western Digital, below, we can see how the price of WDC briefly broke below the June low. Prices rebounded quickly to the upside and then pulled back a bit before rallying again Monday and likely at Tuesday's open. Prices are below the declining 50-day moving average line and the cresting 200-day line. We can also see the recent (and very belated) crossing of the 50- and 200-day average lines for a bearish death cross. The trading volume was heavier in March, but not a really big surge above the average turnover.
The On-Balance-Volume (OBV) line only made a modest decline from February into March, suggesting that sellers of WDC were not that aggressive. The Moving Average Convergence Divergence (MACD) oscillator is improving and crossed to the upside for a cover shorts buy signal.

In this weekly bar chart of WDC, below, we can see the past three years of activity. The big 2020 decline broke the lows of 2019 and the low of late 2018. That kind of breakdown often precipitates a further decline, so it is interesting that prices have rebounded. WDC is below the declining 40-week moving average line. The weekly OBV line made a low in November 2019 and a retest in March of this year. For now I will take this movement in the OBV line as a positive. The MACD oscillator is below the zero line in sell territory, but the two moving averages that make up this indicator have begun to narrow -- another positive.

In this daily Point and Figure chart of WDC, below, we can see a potential upside price target around $54. 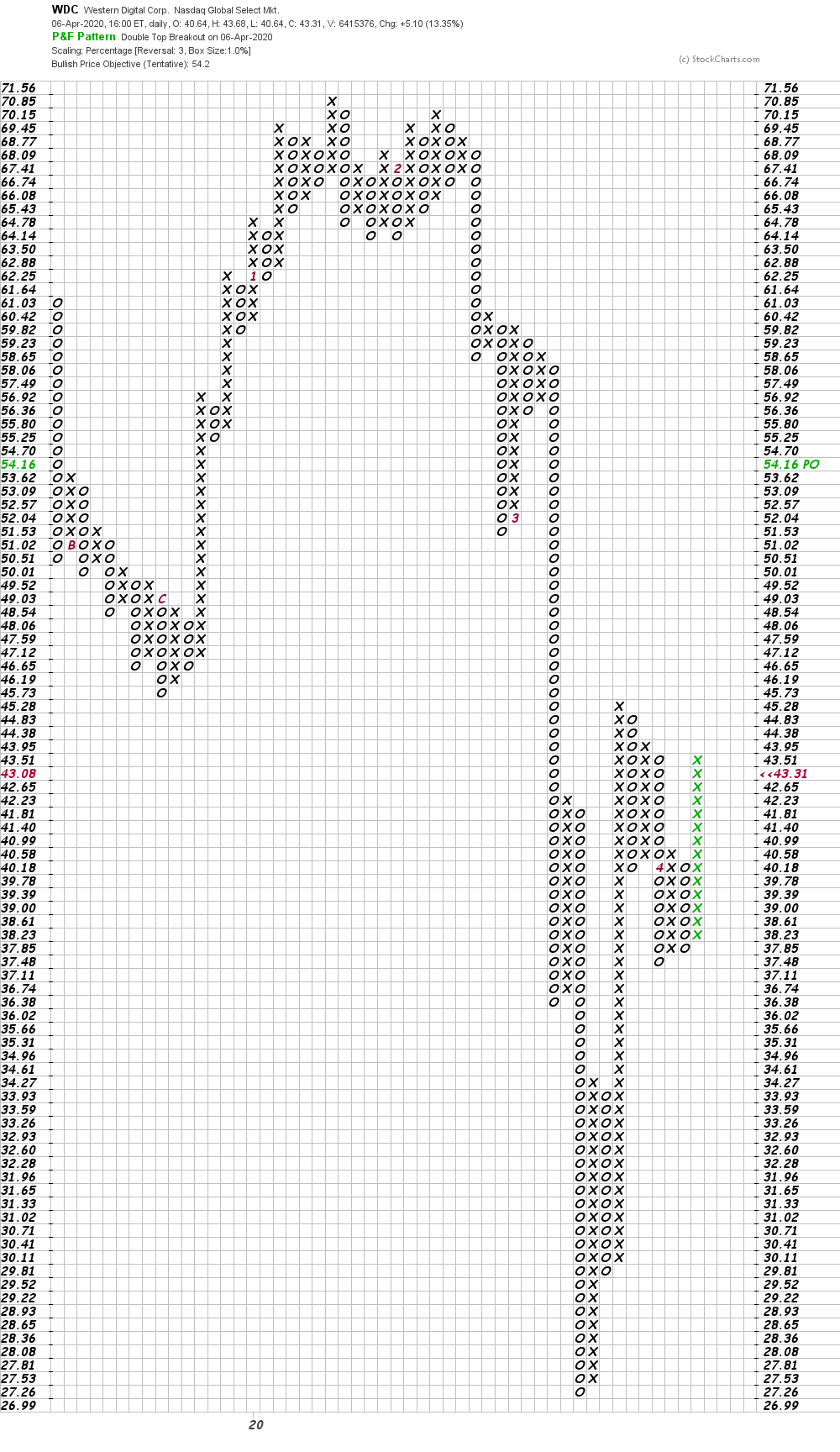 Bottom line strategy: Trade WDC from the long side, looking for a retest of the underside of the 200-day moving average line.
Get an email alert each time I write an article for Real Money. Click the "+Follow" next to my byline to this article.
TAGS: Investing | Stocks | Technical Analysis | Technology | Technology Hardware & Equipment | Mad Money | Real Money