I've been waiting here to be your guide

Reveal the secrets that you keep inside

No one leaves until the night is done

The amplifier starts to hum

The carnival has just begun

For days it seems, maybe weeks, we have dug into the muck with nothing but bare hands. We have discussed deeply the nuances of fiscal policy, of monetary policy and the like. We have made all earnest attempts to reawaken public thirst for cognitive nuance. To broaden the gap between those wanting, even needing to deepen their own interpretation of real-world impacts made possible through the implementation of one school of economic concept over another.

Monday trading volumes contracted from Friday's "final day of the month action." That said, the market was active for a Monday, at least a recent Monday. The day turned out greener for the small-to mid-caps than it did for the broader large-cap indices. Narrower large-cap indices such as the Dow Jones Industrials and the Dow Jones Transportation Average did well, in fact very well for the transports in particular, but perhaps not in the way that you have become accustomed to think.

Bond traders bought the long end of the Treasury curve on Monday, while actually selling the short end. The result was a flatter yield curve. The U.S. dollar softened. Capital flows expectedly moved toward the Energy and Materials sectors, thus chief beneficiaries could be found in delivery services such as FedEx (FDX) and United Parcel Service (UPS) as well as in maritime transport operations such as Kirby (KEX) and Matson (MATX) . The trucker and the rails also rallied but to a less significant degree, while traders sold the airlines.

Put all theory and concept aside for a morning, and just try to make some money? All right then. So it is. We sheath that most sacred weapon of them all, the mighty Ka-bar (after a glorious re-sharpening with a forty-year old stone) in place just ahead of the right-side canteen, we strap the survival blade (upside down of course) to the left-side Y-strap of our harness, boot knife in place on right side, throwing knives secured (think I'm telling you where, keep dreamin'). Ammo? Well, we really weren't thinking about making any noise. Now, we are just about ready. Ready to rock. So, let's move out.

Take a look at UPS and FDX because they are both in serious rally mode, and I am long both of them. Yet, they are in very different places in terms of technical development.

UPS reported last Tuesday and hit the ball out of the park. FDX reported in March and does not step into the batter's box again until June. 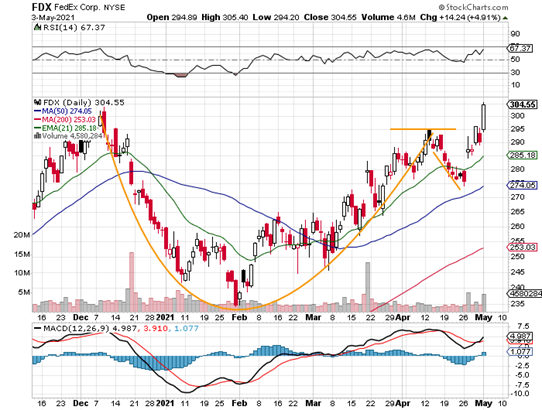 FedEx broke out of a cup-and-handle pattern on Monday that begins back in December. Readers can clearly see the $295 pivot, which in all likelihood might be tested at least once prior to release. That said, Relative Strength is strong, but not overbought, while the daily Moving Average Convergence Divergence (MACD) is in very bullish shape. We are moving our target price here up to $354 from $340, and our panic-point up to $274 (50-day SMA) from $265.

Now, United Parcel Service is in a far more mature place in terms of pattern development, as we display below. 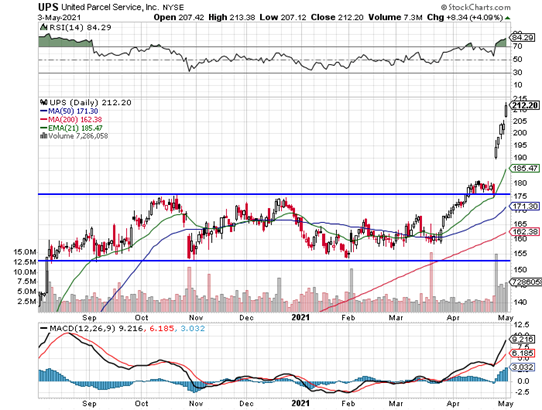 Note that UPS is now a week out of its breakout from an eight-month basing pattern with a pivot of $176. That pivot, you might recall, provided us with a target price of $212. Where did UPS close on Monday? That's right.. $212.20.

Note also, that as this name has reached target, Relative Strength appears grossly overbought, while the daily MACD at the same time seems quite extended. In addition, traders and algos alike can still see the gap created by last week's earnings-induced pop.

I won't tell you what to do, but I will tell you that I fully intend to take a little something off of my UPS long here at target. That's discipline, or at least that's my code of discipline. Doesn't mean that I don't like UPS, just means that the bananas are yellow, whereas for FDX, the bananas are still green.

By the way, a different kind of cavalry is on the way. First I saw a report in The New York Times that the FDA (Food and Drug Administration) was preparing to authorize (for Emergency Use) the Pfizer (PFE) /BioNTech (BNTX) COVID-19 vaccine for American adolescents aged 12 thru 15 years.

As if that's not interesting enough, we learned later in the day that the Biden administration is backing the export of U.S. manufactured COVID-19 vaccines to nations where demand is greater than it currently is in the U.S. India, a nation currently under viral siege, has already approved the Pfizer, Moderna (MRNA) and Johnson & Johnson (JNJ) vaccines, while Canada and Mexico both look forward to, and expect to see U.S. vaccines, Pfizer's in particular, imported into those nations in short order.

Let's face it, the vaccinated world is going to have to vaccinate the un-vaccinated world if this scourge is ever going to really go away. That's just plain science. This is not even due to our national benevolence, but because allowing this virus to spread and mutate anywhere on the planet threatens the immunity of all.

I am hardly a scientist but I have studied this virus as well as all of the vaccines and therapeutics created in the fight against it since becoming ill myself. My information is anecdotal at best, but it appears to me that the Pfizer and Moderna vaccines (the messenger RNA) vacaciones) are of the highest quality, with minimal (that we know of) lasting side effects, and also have large capacity for manufacture. The JNJ jab also can be manufactured in size, and from what I read of the Russian vaccine, Sputnik V, seems like it's working. Then there is also the AstraZeneca (AZN) shot.

We'll get this done, but the effort is a long way from over. I hear neighbors who never had the virus enter their home talk about how tough the last year has been and I think back to my sickest days, and I read of some poor kid in India, half sick herself trying to find oxygen for her father and grandfather who both eventually die, and I think to myself: I hope these folks never find out how dark this beast is.

For those readers who have faced off with this monster, you know. We have all have had that moment, that day, or that week that we thought that it might really be all over.... and prayed to God that our children aren't the ones that find us. 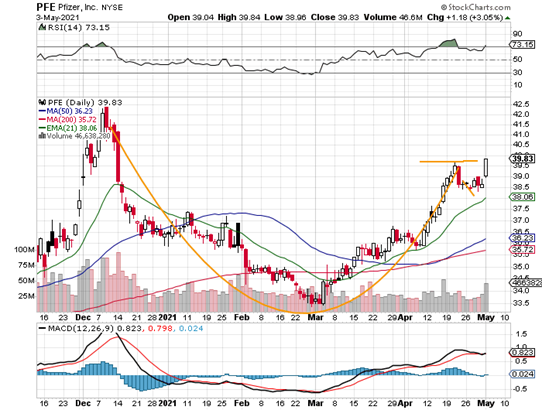 Pfizer reports this morning. More than how good the numbers are, what is said concerning both youth and global vaccination is what will determine whether or not this train is leaving the station.

On the Bright Side...

A) You're not the guy who bought AOL and Yahoo for Verizon (VZ) in 2015 and 2017, respectively. Could be the worst trade since Credit Suisse (CS) placed such a high valuation on DLJ Direct, or since your moron author thought CMGI was a good idea.

B) According to sources, citing a memo from the desk of NYSE COO Michael Blaugrund, the New York Stock Exchange plans to (on May 10) permit companies with trading floor-based staff to increase headcount to 100% if those employees are vaccinated. Those vaccinated will also be excluded from random testing and be permitted to remove their masks while seated at the workstations (in their booths), provided social distancing is maintained.

(Dupont and UPS are holdings in Jim Cramer's Action Alerts PLUS member club. Want to be alerted before Jim Cramer buys or sells these stocks? Learn more now.)

Get an email alert each time I write an article for Real Money. Click the "+Follow" next to my byline to this article.
TAGS: Earnings | Futures | Indexes | Investing | Markets | Small Cap | Stocks | Trading | U.S. Equity | Coronavirus