You know what is one of the most interesting aspects of the decline on Wednesday? There was very little selling in a few of the mega-cap tech stocks. Maybe we shouldn't call them mega cap anymore, since I saw a note on Wednesday that Amazon (AMZN) has lost over one trillion dollars of market cap. I didn't bother to check to see if that was true, but I do know that we have far fewer trillion dollar companies now than we had a year or so ago.

Some might call that a rolling bear market, as folks are done selling the likes of Alphabet (GOOGL) and Microsoft (MSFT) for now. It's possible. But I find it more interesting that folks sold banks and energy stocks, because that's where they have profits to protect, especially in energy.

The trend that began on Tuesday carried through on Wednesday. By that I mean the New York Stock Exchange Hi-Lo Indicator joined the Nasdaq Hi-Lo Indicator in turning down. The NYSE did not see a pick up in stocks making new lows, but Nasdaq did.

Nasdaq now has more new lows than it did on last week's trip down to this 10,300 area, but still fewer than it had during late September's trip down and early October's trip down. 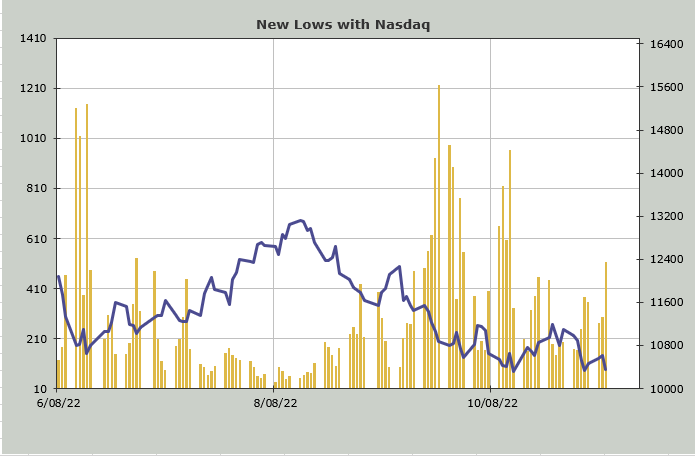 Here's the difference between now and late September and early October: Back then we were grossly oversold. That is not the case now. The Overbought/Oversold Oscillator for Nasdaq did finally dip under the zero-line, but you can see where it was in late September (almost -1800), which was grossly oversold. Even the intermediate-term is not oversold as it was then.

The NYSE's Oscillator hasn't even gotten under the zero-line. Here, too, you can see how oversold it was at the lows and that it is not even close to the area now. That's the main difference. A month or so ago we were oversold with terrible sentiment. Now we are not oversold and sentiment is only now turning bearish again.

I want to take a minute to note that this is Nasdaq's third trip down to this 10,200-10,300 area, so if it breaks with any oomph, I would consider it a fresh break.

The good news is that the McClellan Summation Index is still rising. It now requires a net differential of negative 1,500 advancers minus decliners on the NYSE to halt the rise (obviously more is needed to roll it over). This is the closest we have come to halting the rise in weeks, though. But up is still up.

In the meantime, this crypto collapse has turned the chatter away from Thursday's CPI. I remain hopeful that regardless of the CPI reading we can see bonds rally.