Two weeks ago, I thought we had seen some bearishness creep into the market, but no panic. We heard all sorts of calls for a move down to 2850, but we didn't really see it in the indicators. But based on the Investors Intelligence bears being back up to over 23%, I guess it was enough bearishness, coupled with the oversold reading.

I have promised you that I will monitor sentiment closely, and yes anecdotally we see it turning as this week has progressed. For example, the American Association of Individual Investors (AAII) saw the bulls climb to 35% this week. This is not much, but it is the highest reading since that early June high. Any higher than this, and we'll be at a post pandemic high. That's a big shift in sentiment this week. 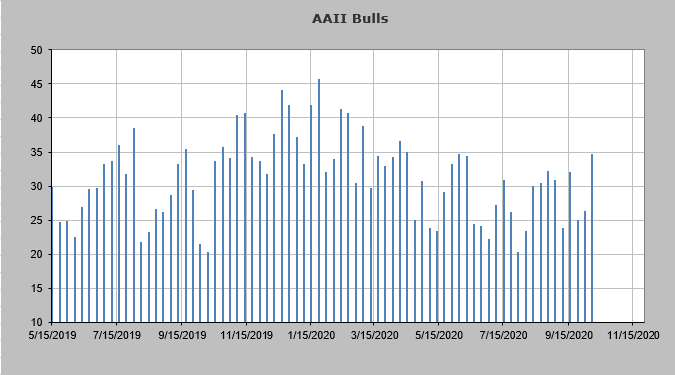 A few days ago, we discussed the 30-day moving average of the advance/decline line, what I use for an intermediate-term Overbought/Oversold Oscillator, and I noted that coincidentally, it was set to get overbought right around the election. That still seems to be the case.

The market is now short-term overbought. Whether I use my own Overbought/Oversold Oscillator or the Nasdaq Momentum Indicator or what it will take for the McClellan Summation Index to turn back down, all of these indicators show a short-term overbought reading. My sense is that we should get a pullback next week, but I think it would be short term.

Since the intermediate-term doesn't appear to be overbought until early November and sentiment is shifting upward, moving toward more bullish, it's not hard to imagine the Investors Intelligence bulls, which are now 54.5%, getting up to that 60% area again in a few weeks, is it? Over 60% and I consider it a red line for sentiment.

Away from that, we have looked at the contracting new lows a few times of late; the 10-day moving average is now heading down. But I have not discussed the new highs. On the New York Stock Exchange, the number of stocks making new highs is now at 162, which is the highest reading since late August when there were 165 new highs.

Only now the S&P is lower than it was then. That means stocks are outperforming the big cap index. Remember when there are more new highs, it is easier to make money on the long side: There is more to choose from.