In a free market, price discovery is defined as the method by which the fair price of any asset is determined through the interaction of buyers and sellers at the point of sale. Just in case there was anyone left who thought current methods to be anything other than perverse, the Dow Jones Industrials rallied 1,086 points on Wednesday, or just under 5%. This came on the heels of the market's now-infamous "Christmas Eve Massacre," and in all honesty, it left the index largely unchanged from last Thursday afternoon's close. Unchanged over a week. Think about that.

The Energy, Consumer Discretionary and Technology sectors all experienced gains of around 6%, while within the discretionary sector, both internet and multi-line retailers were snapped up with both speed and violence. It becomes easy for those of us running net-long portfolios to ignore the 800-pound gorilla in the room, when that gorilla is on our side of the market. That said, plainly in a universe where the execution of trade is measured in microseconds -- because milliseconds are considered far too slow -- how are buyers and sellers supposed to interact in any reasoned, thoughtful way?

Those of us who grew up in a market where half the battle was finding the other side of the trade, have a choice. We can participate in a marketplace where speed and overshoot are the norm, or we can not participate. The horses have left this barn. There is too much money served by speed versus that served by the purity of market interaction. Forcing overshoot is now more important than the art of putting buyers and sellers together at the right price. If doing things the right way ever becomes important again, you know where to find me. Until then, throw the big orders in the wood chipper. Trade in nothing but odd lots. Nobody else sees the problem?

Dead cat bounce? Actually, don't ever say that. Everything happens for a reason. When I hear anyone in finance use this adage as an explanation for a rally, my brain also hears them say that they haven't a thought in that melon of theirs that they are now failing to use. Thursday's action, for those that maybe took an extra day off for the Christmas holiday, started out as a technical bounce off of an extremely short-term oversold condition that then turned into a short squeeze. Not very hard to figure out.

Bear market rallies can be convincing in the moment. They can be like what we saw yesterday -- violent. For the Wednesday rally to become more than just a tradeable event, there has to be a catalyst beyond the last-hour short covering that ran through this marketplace. How do we know that there was a broad short squeeze? We know that because the Thomson Reuters United States Most-Shorted Index ran 6% on the day, outperforming the major indices.

Holding the levels reached, or even coming close, becomes important this Thursday morning. The next catalyst becomes the monthly/quarterly pension fund rebalancing that should be more than an average reweighting, given the market's general behavior over the last month and quarter. For the S&P 500, the 2570 level would be a ballpark 38.2% retracement of the market's puke-athon that began back in early October. My opinion is that without a take and hold of that spot, which is still 100 points to the north of Wednesday's close, this is all a trading exercise. Domestic equity index futures appear to show non-believers dominating, as late night melts into early morning. Then again, futures trading is also a high speed algorithmic game at this point, so we'll see.

What's On Your Side

Traders may or may not have noticed research released by Morningstar over the holiday that showed net inflows for domestic mutual and exchange traded funds over the first eleven months of the year at an estimated $237 billion. That number presents as a 62% decline year over year in a year that saw increases in labor participation, employment and wage growth. In addition, is there anyone among us who thinks these net inflows improved in December? My guess is that there will be some increased cash looking for a home short-term. Regular folks may prefer a lock box to market exposure right about now.

In addition, the recent weakness across the marketplace, based on slower growth both for the economy and for corporate earnings, could also prove to be an asset as we proceed into 2019. How so, you might ask? Ever know that your firm was about to reduce overhead? Every single employee comes in on time, stays late and eats lunch at their desk. Perhaps the same is true on the grander scale. Perhaps a tougher environment leaves the Federal Reserve is a position to be less cavalier with the pace of policy normalization. The next increase for the Fed Funds rate is not currently priced in by futures markets until... oh yeah, that hike is simply not priced in. Period.

It's not just monetary policy, either. The unwillingness to fail at such a key moment in time could actually produce a way for both President Trump and President Xi -- who are both feeling the heat -- to find a mutually beneficial way to end the trade war by March 1.

What Is Not On Your Side

Disappointing outcomes, plain and simple. The trade war gets worse, not better. The economy does slow down. Earnings growth does not print at levels that advocate for higher valuations. Global central banks back off from normalization earlier than does the Fed, leaving the dollar over-valued.

By the way, Citigroup (C) reports on Monday, January 14 and JP Morgan (JPM) on the next day, so earnings season is truly right around the corner. Fourth-quarter earnings are, at this point, expected to print at year-over-year growth of less than 13% on revenue growth of 6.5%. Both of those expectations are well off of the pace set in Q3 of 26% and 9.3%, respectively. Look for outperformance from the Communications Services sector, but outright revenue contraction for the Utilities -- despite that sector being the only group in the green over the previous 90 days. What could go wrong?

Take a Pass on Nvidia (NVDA)

This is going to be a case of do as I say, not as I do. Before we proceed, understand that I remain long Nvidia shares and am constantly managing short positions in both call options as well as put options. One can always manage oneself out of a jam, at least in high profile names that come loaded with a liquid, volatile options market in tow. But flipping options for net-basis-reducing profit on a daily basis, is not how one would choose to spend their time, all things being equal. More importantly, the name ran with the market on Wednesday, up 4.7%, and is down with the futures this morning (-2.6%).

There might be a few retail traders reading this that are biding their time, waiting for a chance to get in on this name. If not already heavily engaged, I would wait a little longer. In my humble opinion, this name will rise again, but first we need to see progress made in inventory reduction. This gaming/cryptocurrency overhang likely persists, and when the firm goes to the tape with fiscal Q4 2019 data in mid-February, revenue will almost certainly print in contraction on both a year over year as well as a sequential basis. The data center and artificial intelligence are going to have to drive the firm while this overhang is worked through, maybe with some help from automotive (literally).

The primary catalyst for buyers would be the share repurchase program. Going back to November's earnings' debacle, the firm authorized the addition of $7 billion to the program through the end of 2022. Is that enough for you? Take a look at the chart. 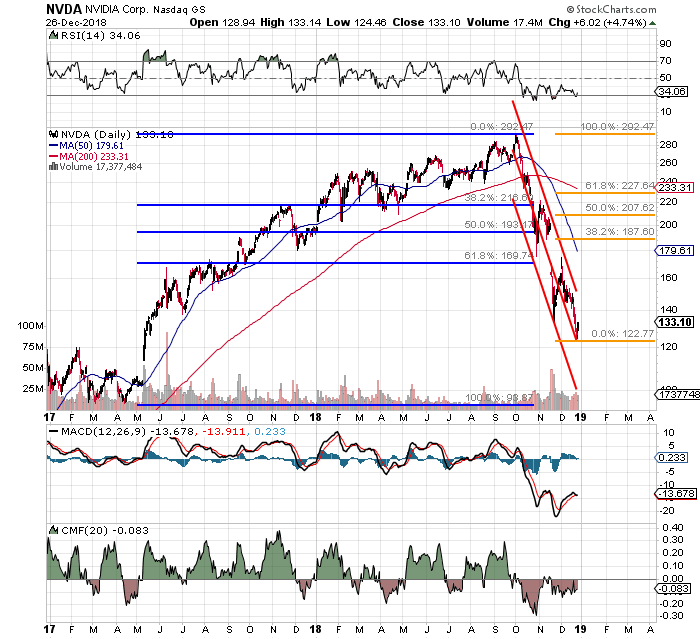 Even in a state of near free fall, NVDA continues to post lower highs and lower lows. The eyes are quickly drawn to the dramatic break of the Fib level at 169 that then became resistance. Even with Wednesday's short covering, both Money Flow and Relative Strength remain at awful levels. The daily Moving Average Convergence Divergence does not present much better, and appears to be ready to let the stock try the low to mid $120s again.

This stock survived a series of tests from the upside in early 2017. Those prices? They were in the $90s. Does the stock need to trade that low? Honestly, I am not sure, but if this $120-ish spot does break, the possibility cannot be ignored.