As if we needed any more evidence that we remain in an either/or market, the transports clocked in their fourth straight red day, something they haven't done since January, while growth stocks got all the love. Oh, and banks were red, as well.

What I find interesting is that even I had noted that since I thought the growth stocks would rally, I fully expected breadth to be crummy. I didn't promise not to complain, but I did expect breadth would be crummy. Yet, it wasn't. Net breadth on the New York Stock Exchange was 1,120 with the S&P up 43 points. Last Thursday, when the S&P tacked on 50 points, net breadth was positive 1,180. The Russell was up 35 points last Thursday, and only 14 on Thursday of this week. Thus, not as crummy as I would have thought.

It was volume that was pathetic. Total volume was pathetic, because it was so low. But as you know, I am more concerned about how much of that volume is on the upside. Last week saw 60%, and this week saw 58%. That means both readings were on the low side for such a rally.

Nasdaq, however, saw 74% of the volume on the upside so that's in line, as well.

So did anything change in the market? Not really. The one chart that I think is important is that of the National Association of Active Investment Managers (NAAIM), because they once again lowered their exposure, this time to 44. Last week, they were at 48, and a month ago they were over 100, which means they were on margin.

I would have liked the reading to be under 40, but this is the lowest reading we've seen since the March 2020 lows, and I do believe these are mostly growth stock investors, so it is a reflection of their views or lack of exposure to growth stocks. 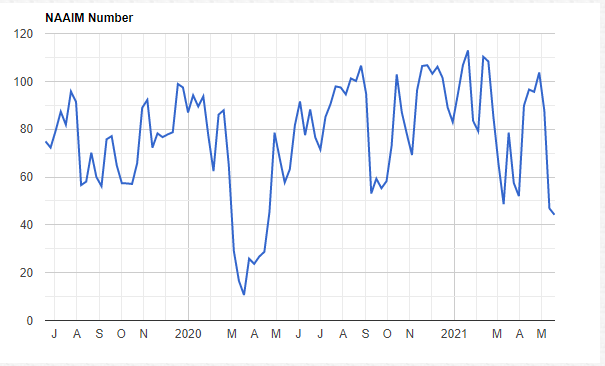 Sticking with sentiment, the 10-day moving average of the put/call ratio is now closing in on the peak reading from last fall, just prior to the election. Thursday's put/call ratio came off the boil from Wednesday's super high reading but it was still elevated at .85. Beginning Monday, this 10-day moving average will begin dropping a string of readings over .90, so it ought to turn down.

I do not know yet when we will get overbought again. At this point it looks like Nasdaq will be overbought just before Memorial Day. If the market pulls back on Friday, I would expect another rally attempt next week. If the growth stocks can rally for longer than a day or two I expect we'll see sentiment shift by the end of next week.

Get an email alert each time I write an article for Real Money. Click the "+Follow" next to my byline to this article.
TAGS: Investing | Stocks | Technical Analysis | VIX | Transportation |