All the equity indices are in short-term downtrends and below their 50-day moving averages. However, it's not all bad news. Indeed, we have raised our near-term outlook for the equity markets.

All the major equity indices closed lower Friday with negative internals with all closing at various points within their intraday ranges.

The Nasdaq Composite and Nasdaq 100 closed below support as the rest held. Yet while all remain in near-term downtrends, the fact that most held support on a broadly negative day is slightly encouraging, in our opinion. 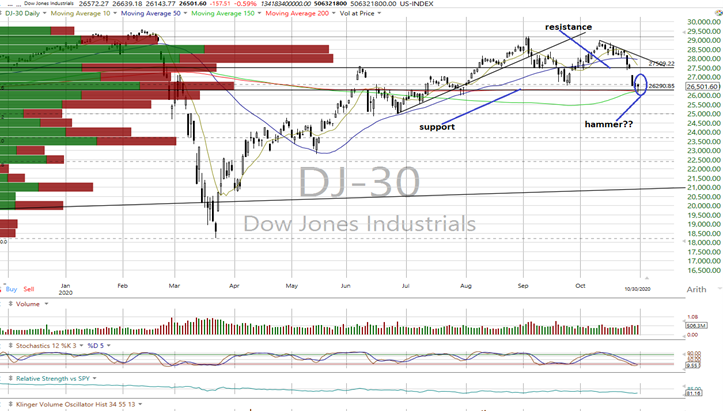 Another point of interest is the DJIA (see above) possibly having formed a "hammer" signal, which might imply a short-term bottom. Such signals are believed to have bullish implications when they appear after a protracted downtrend when the index or stock opens, trades notably lower intraday but manages to close at or near its intraday high at the close. The theory suggests selling pressure was exhausted, followed by enough demand to push price back up near the day's highpoint.

Breadth remains negative on the All Exchange, NYSE and Nasdaq and below their 50 -day moving averages.

The stochastic readings are oversold on all with several in the single digits but have yet to flash bullish crossover signals.

The data saw some further improvements.

The one-day McClellan Overbought/Oversold Oscillators remain at oversold levels that may suggest a pause/bounce from the recent weakness (All Exchange: -85.82 NYSE: -87.49 Nasdaq: -86.19).

In contrast, the Rydex Ratio (contrarian indicator) dropped further to a neutral 0.61 as the leveraged ETF traders became more nervous and lightened up on their leveraged long exposure. As stated last week, should this dynamic continue, we would view it as a positive transition in sentiment.

The valuation gap narrowed its overvalued levels, with the S&P 500 trading at a P/E multiple of 20.1x consensus forward 12-month earnings estimates from Bloomberg of $156.72 per share, while the "rule of 20" finds fair value at 19.1x, a bit less cautionary.

While the charts and breadth remain negative, the improvements in psychology and valuation are enough to lift our near-term outlook for the equity markets to "neutral" from "neutral/negative."