The either/or market is still with us.

We had exactly two days this week - Monday and Tuesday - when all stocks managed to move in sync, but that was it. Now we're back to mega-cap tech sucking all the energy out of all the other stocks and vice versa. Clearly it's not just our country that is so divided, it's our stock market, too.

But the selling in the stocks that were down was minimal. Much of it felt like give-back. Like chop. Like it should have after that two-day run. So, for now, I am not that bothered by it. However, since I still expect that after a few days of chop/pullback we should see another lift next week, I'll explain a possible bearish scenario for next week.

Thus far we know breadth, with the exception of the last few days, has been terrible for two months. If breadth cannot get itself going again by the end of next week, that becomes problematic. The window is open for a rally. Stocks ought to take the opportunity to rally when given one.

Sticking with breadth, the McClellan Summation Index has been in a downtrend, thus the majority of stocks have been in a downtrend, since early June. At present this indicator needs a net differential of positive 2,100 advancers minus decliners on the New York Stock Exchange to halt the decline. If this indicator cannot halt the decline by the time we get back to an overbought condition, I would find that problematic.

The number of stocks making new highs hovers around 100. In early July I thought it was pathetic we had only 200 new highs, so you can imagine what I think of 100 new highs. However, if this number can get back to 200, I would consider it a minor victory.

On the sentiment front, the total put/call ratio remains elevated, much to my surprise. It ended the day on Thursday at .87. The 10-day moving average of the equity put/call ratio has rolled over from what has been a high level over the last year. That has typically meant there is more rallying to go.

The American Association of Individual Investors (AAII) chimed in with 30% bulls, which is the lowest reading since September last year, so we know this group is now similar to the Investors Intelligence bulls, who dropped from 62% to 53% bulls earlier this week. 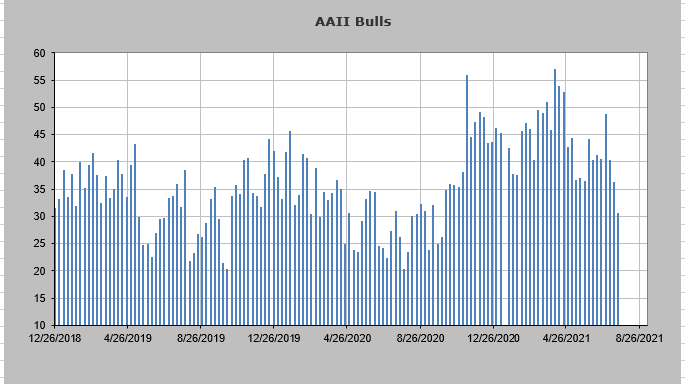 The National Association of Active Investment Managers (NAAIM) saw their exposure drop from the low 90s to 71, so we know the early July decline changed their views, as well. 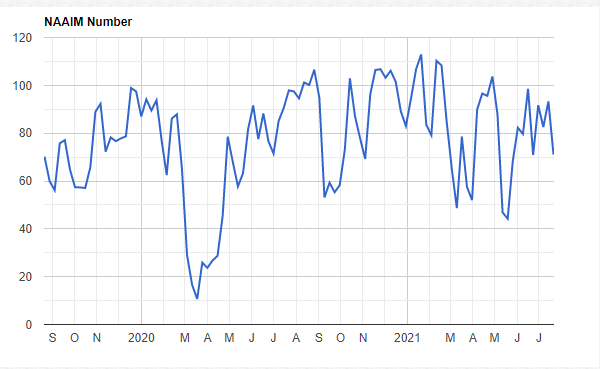 So we have sentiment in the right place, now we just need more stocks participating while the market is not yet overbought. If they can't improve the breadth of the market by the time we get back to an overbought condition then I think August will set up similar to July where the rally is unsustainable and vulnerable.