I left my desk for a few days and I see we got the pullback after the rally.

But the question of the day, at least in my inbox, was if the pullback is over now. I don't think so, but one thing is for sure, the either/or market hasn't gone away.

Every single guest on television recommends the same thing: Stay away from growth stocks and concentrate on commodities, industrials and financials. That has been the trade for the last few weeks. Yet, Tuesday, it was growth that stopped going down and caused the market to lift off the lows.

If we look at the volume in the Invesco QQQ (QQQ) we see it was just a smidgen over 70 million shares. That is often enough to see a short-term rally develop, the same way we saw it just over a week ago. Also notice that the rally a week ago took the QQQs right to resistance. Tuesday's decline took the QQQs down to fill that late March gap. 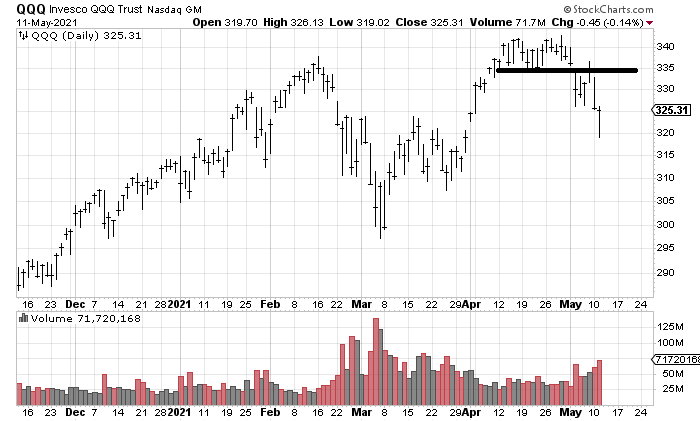 Using my own overbought/oversold oscillator, the Nasdaq looks close to an oversold condition. Remember, this is based on the 10-day moving average of the net of the advance/decline line and Nasdaq's breadth has been red for seven of the last 10 trading days.

Typically when the Oscillator is oversold, I can perform an exercise on the Nasdaq Momentum Indicator to see when it might get oversold. I must report that Friday would be the earliest day for that, and it's possible it can even go into next week. My point is I'd say it's moderately oversold.

Then there is the put/call ratio. The various moving average lines are not yet extreme, but Tuesday's trading ended with the ratio at .99, which is the highest since the late October/November time frame. So suffice to say we are finally seeing some bearishness creep in. I do think the bearishness is only in the tech stocks though, not the overall market.

The number of stocks making new lows continue to expand, not contract. This needs to start contracting if it's going to be more than a short term rally. On Tuesday Nasdaq's new lows numbered 232 the most since late March.

Now let's talk about the dollar since it is sitting right at an uptrend line of support. In general, even if it breaks the line, there is support all the way down to 89. I bring this up, because the Daily Sentiment Index (DSI) is at 20, so the buck is getting oversold, at support and has some serious sentiment against it. Add to that the fact that we're still in an either/or market so if growth rallies maybe those favored commodity stocks back off.

That would really keep the frustration level high, wouldn't it?

The bottom line is that I think we can bounce, but I don't see that many extremes. Not yet.