Let me start by wishing all the veterans out there a Happy Veterans Day!

That also means the bond market is closed on Friday. But we did get a rally in bonds on Thursday based on the lower than expected consumer price report. So let's start with a chart of the yield on the Ten Year. I have drawn in the big uptrend line that I have been drawing for weeks (blue), but have now added that flat green line.

It is rare that a break blows through support so readily on its first crack of the trend line, but that is exactly what has happened. That break measures into the 3.6%-3.65% area. For now rallies into that 4% area should fail.

Then there is the buck. That too broke the nearly one-year long uptrend line. Here we did not break support (blue line), but I believe that bounces back to that 110 area should now fail. As I noted a few days ago, the top has a measured target in the 106-ish area.

All of this obviously helped stocks. In particular it helped tech stocks, because they were the stocks that were getting hit the hardest on the bond and dollar movement. That means the mega-cap stocks rallied hardest. But how were the statistics? There were some good and some not so good.

The NYSE had terrific breadth as it has been keeping pace for the most part. That means the McClellan Summation Index is still heading upward. But when it comes to stocks making new highs, Thursday was quite disappointing. The NYSE had 98 new highs in early November and on Thursday there were 75. This is despite the S&P making a higher high than early November. If this negative divergence remains in place when we get to an intermediate-term overbought condition near Thanksgiving, it will be problematic. 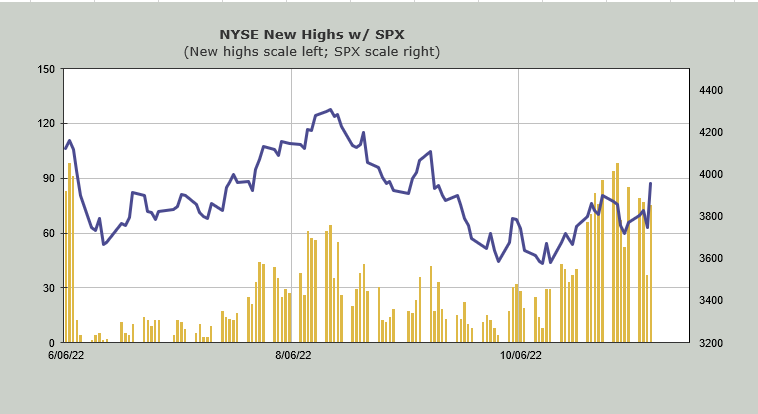 Nasdaq, where the index did not make a higher high than early November, saw a modest uptick in new highs. The peak reading in early November was $140 and Thursday was $144. 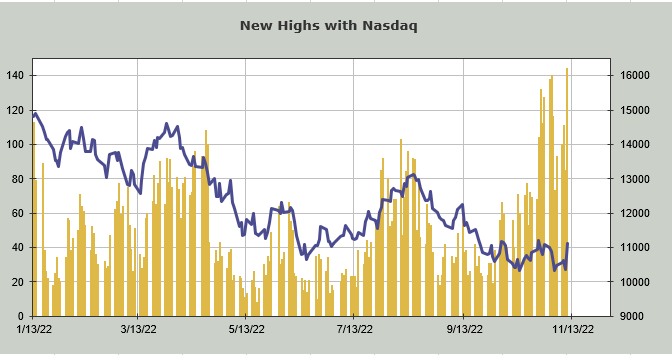 Volume on the NSYE was also underwhelming. For such a massive up day in the major indexes upside volume was a mere 87%. Nasdaq managed to get to 90%. Again, I believe that is because folks had to scramble to either cover shorts in tech names or buy mega cap tech names to get exposure to the market.

I do want to note that the ten day moving average of the equity put/call ratio is now the highest it has been since March 2020. Thanks to two days this week with readings at 1.30 and .96 (Tuesday and Wednesday) this metric has soared. I'll consider that supportive of the rally. It is my view that if the market doesn't collapse in the next week -- which is not my assumption -- we will see a shift in sentiment in near record time. 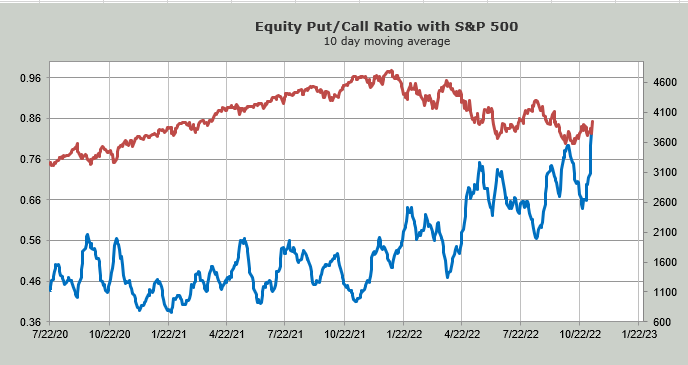 In any event Thursday looked like a day that caught far too many offside and they scrambled to get back in position.