We got the rally, but you probably don't need me to tell you it wasn't the best rally we've seen.

I have been harping about the volume figures being so distorted by all the speculative action in GameStop (GME) and the rest of the high short interest names, so I will keep harping for now.

During Wednesday's decline, up volume was decidedly more than down volume at 55%, which is so odd for a day the major indexes lose 2% or more. Thursday's rally saw up volume on the New York Stock Exchange at 51%.

Let me remind you the S&P 500 rallied 1%. But more stocks were up than down, as the advance/decline line had a relatively positive showing.

What did change, then? Let's start with sentiment. The American Association of Individual Investors (AAII) whose survey closes on Tuesday, so these readings will not capture Wednesday's action, saw bulls retreat to levels we haven't seen since the election and bears rise to levels we haven't seen since September. At 38% for bears, you can only imagine if the survey went through Wednesday, we'd see this over 40%. 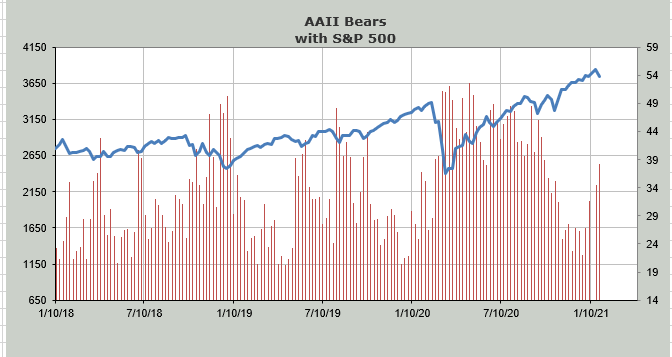 Then, there is the National Association of Active Investment Managers (NAAIM). Last week, their exposure to stocks was at 113, the second highest on record. This week, it fell to 83, which is where it was heading into January. These two sentiment indicators, while not extreme, yet do show a shift, and that shift happened quickly. 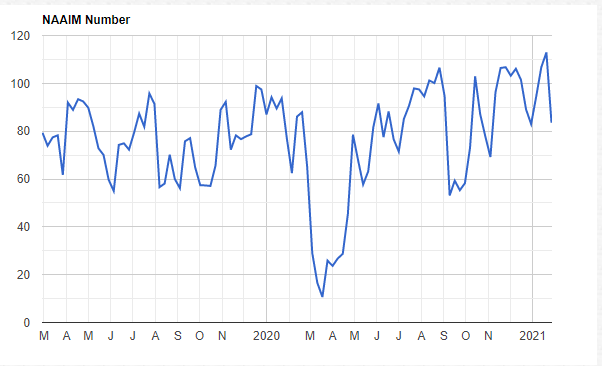 The 21-day moving average of the put/call ratio for ETFs has been rising for a few weeks now. You can see on the chart, peaks in this indicator (blue) tend to coincide with lows in the S&P (red). I will monitor this for signs we are seeing too much fear in the market. A peak and a turn down would indicate that. 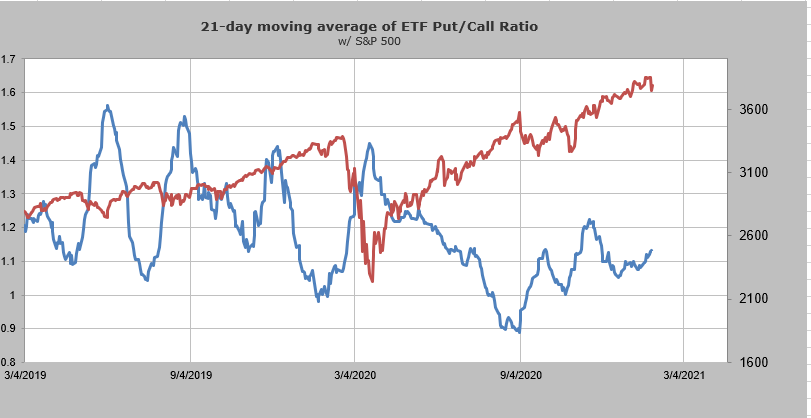 The Russell 2000 has now strung together four straight red days, something it hasn't done since February of last year. It has also been red five of the last six trading days. I do not highlight this to scare you, because of what transpired in March, but to remind you, once again, this did not start a few days ago, the weakness has been going on for longer than a few days. It's just that Wednesday was the day it caught folks' attention.

It also means the Russell should be the first index to get oversold.

I expect the volatility to continue. The one thing I am certain of is that the complacency, I discussed here on Monday, is being wrung out of the market. And ultimately that is bullish.