Well, that was an interesting day in the market. And it was quite different from the last several.

For the last few days, breadth has been good. It hasn't been good enough to turn the McClellan Summation Index upward, but it's been good. That was not the case on Wednesday. Let's look at the last three trading days.

And as you can imagine, it has not helped the McClellan Summation Index turn upward. It could have, but positive 310 (advancers minus decliners) is not going to do much more than flatten it out and keep it from going down. Now it is in danger of turning back down, should we have a negative breadth day. In other words, after three straight rally days, there is very little cushion in this indicator for a pullback.

To make matters even worse, up/down volume on the New York Stock Exchange was actually negative. Did you see the transports were red, by quite a margin, as well? The utilities, too? The Russell 2000 escaped the color red by a fraction.

Wait, wasn't there any good news in the rally? Well sure, remember that line I drew in, a support line for the Invesco QQQ (QQQ) ? It held on Monday, despite all the negativity toward mega-cap tech, and rally it did. But as you can see, it's still an either/or market. Either mega-caps play and everything else sits it out, or everything else rallies and mega-caps sit it out. 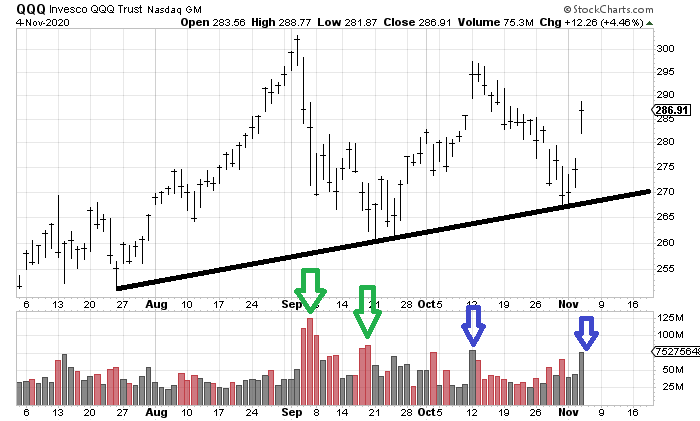 There is something else curious going on with the QQQs. Long-time readers will recall that high volume declines in the QQQs have been a reason to buy. That went a bit awry in September as the high volume decline led to a one-day rally, and that was that. But in late September, it worked just fine (arrows on the chart).

Now, notice there was a bit of higher volume last Friday, but focus in on the high volume up day in mid-October (blue arrow) and then Wednesday. High volume up days in the QQQs are atypical, or have been, but that mid-October, one was a high. I don't yet know if this is a pattern, but I'm alerted to a possible change.

High-volume declines tend to mean (to me), "I don't know what to sell, so I'll just sell QQQ," which is why it's bullish to me, because it feels capitulatory. The high volume rally in October could have been a "just get me in," which in its own way is capitulatory. Again, it's only a handful of times, but it's on my watch list.